What other possible coalitions in Germany (or Austria?) have vexillological inspired names?

Since there is also a rainbow flag there are also rainbow coalitions.

As there are many colours in such a rainbow/flag, members of such a coalition can be almost anyone.

Since the colours of any given flag come in a special order, it may also imply that the first colour designates the leading party in such a coalition.

While Kenia and Afghanistan would be identical coalitions

and have black (A conservative Union party) as the first colour, one might in the future opt for the dwindlingly hypothetical Libyan,

where red would come first.

An alternative name for Ampelkoalition is "Senegalkoalition" or Tansania. Flags of Senegal, Tansania.

Caveat: currently this 'traffic light' includes blue, standing in not for the AfD but for Free Voters Groups. Found in Offenbach and Neu-Isenburg.

Curiously, a coalition between leading Greens and conservatives is called Kiwi.

And of course the traditional black, red and yellow, of CDU, SPD and FDP is now called the Deutschlandkoalition.

Should there ever be a Gambia coalition, between social democrats SPD, and Greens with the blue of the AfD

we can then be sure the global warming crisis was a hoax, since we would also witness that hell did freeze over! (Actually, there was a local attempt to do this in Muldestausee, 2015. But higher-ups from the Left party in that state prohibited them from pulling that through.)

Well, that is unless you interpret this flag/coalition as the "Danish traffic light" (also called coast coalition). In Schleswig-Holstein they have a coalition of SPD, Greens, and SSW. The Danish minority party SSW also reclaims blue as 'their' colour.

But it seems that black, yellow, blue, the Bahamas-Koalition: Schwarz-Gelb-Hellblau is on its way to reality.

In Switzerland they do have a Armenia-coalition (Armenien-Koalition (SP, FDP, CVP))

And since you ask for theoreticals: The 'Grand Coalition' between CDU/SPD might as well be called Albanian.

A theoretical coalition between The Left and the AfD is called Haiti.

A equally unlikely coalition between CDU and the Left is called Cherry Coke.

The Hamburg traffic light is a coalition between SPD, The Left and Greens (red, red, green).

One source: –– Albert Link: Kiwi, Kenia Und Co. – Koalitionspoker so bunt wie noch nie – Nach den Wahlkrimis von Magdeburg, Mainz und Stuttgart: BILD erklärt, wie sich die politische Farbpalette erweitert, Bild, 15.03.2016. Given the source, it cannot be ruled out that they made up those things like 'cherry coke'. But it's out there now.

If all this sounds confusing and arbitrary: it is. Entirely. The parties themselves use certain colours, but also switch them. Then political reporting doesn't always follow suit. Either out of necessity to differentiate 'two red parties' on a colour TV or because right-wing extremism 'should be called out as what it is' with brown. The conservative Union parties CDU and CSU use red and blue for their logo, yet are often counted as 'black'. What was once a derogatory term is used in journalism throughout, especially adopted in blue and white Bavarian CSU as self-description, and since 2004 developed as a brand recognistion for the party youth organisation JU.

Let’s look at German parties as an example. Here we can see the colors that they define as brand colors in their style guides. 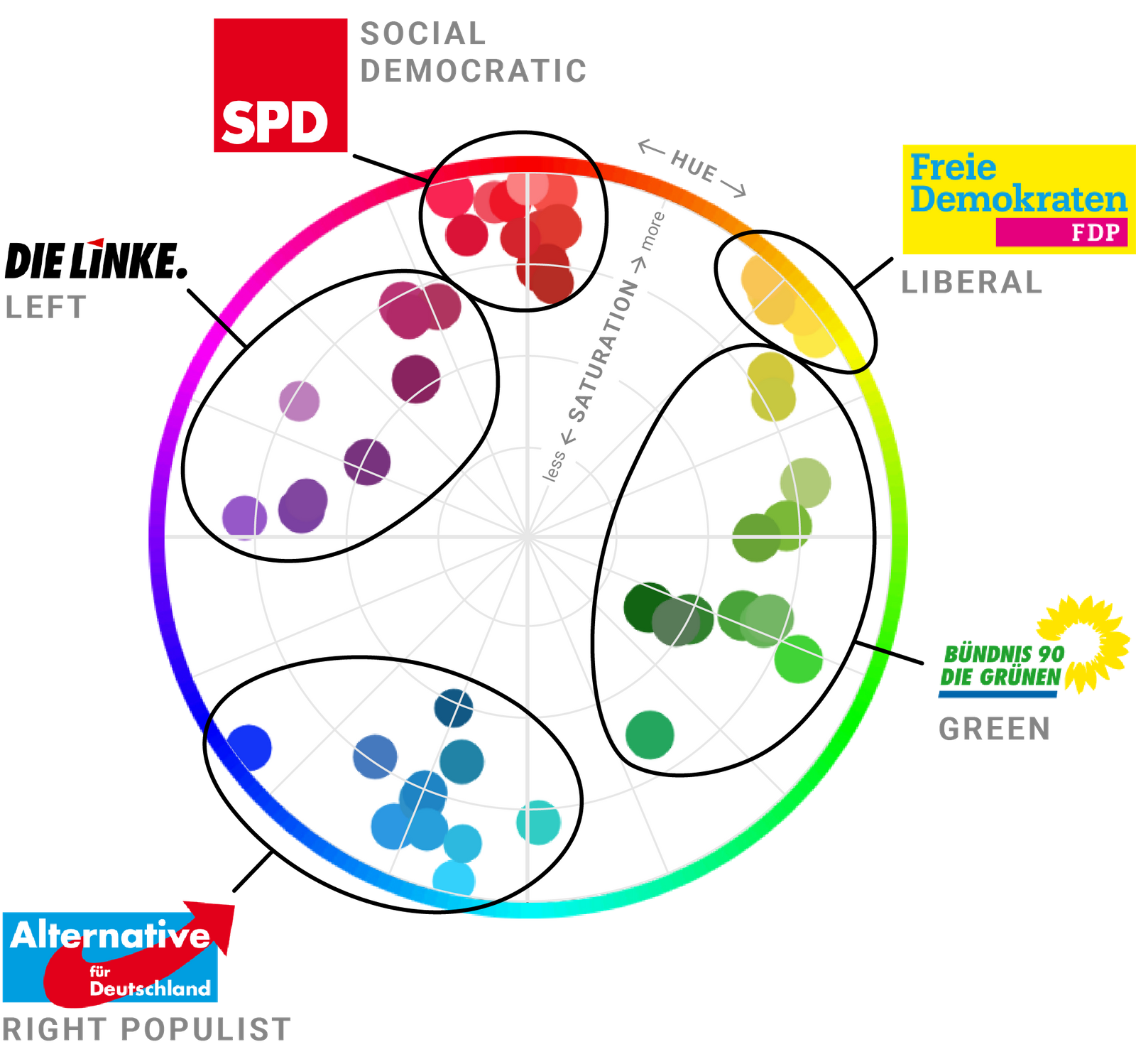 This is so not helpful. The two biggest parties in the country, SPD and CDU, both have almost the same red as their logo color. The party colors don’t help to distinguish clearly between parties in this case. 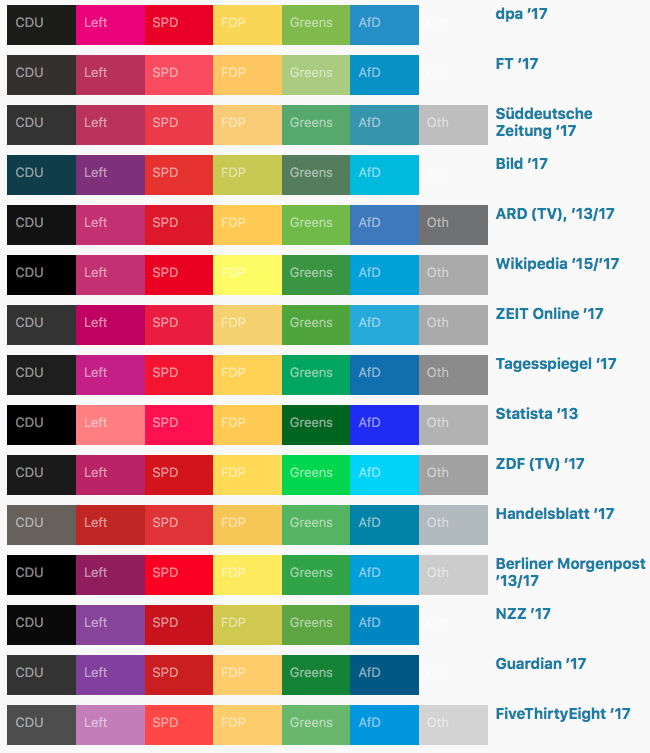 –– Lisa Charlotte Rost: "Thoughts & How To's – Election reporting: Which color for which party?", Chartable A blog by Datawrapper, Aug 28, 2018.

Blue can go to CSU, AfD, SSW, (and Blue Party, STATT, in dissolution or gone now). Citizens in Rage also use blue and national colours.

Blue, white and rainbow are claimed by the Animal-Protection Party

Brown is reserved for NSDAP, but equally applied to NPD, Republikaner, DVU, Die PARTEI. As they all use black, white red; or black, red, yellow, or white and red. And the new nazis from the AfD want to appear blue, but are increasingly associated with classic brown.

Yellow was since 1972 for the liberal FDP, which now also claims blue and magenta. Looking for the perfect balance between attention grabbing contrast and eye cancer. Before 1972 they used orange and liked to use a lot of signal red.

Green is luckily quite self-explanatory in terms of party affiliation.

Grey is for three versions of the Grey Panthers, a pensioner interests party.

With orange it's again complicated since, Piraten, ÖDP, Family Party and A Free Voters group claim it. But also the CDU is interested in using this colour.

Red is traditionally The Left, SPD and nowadays also the conservative CDU in their logo. The SPD tries very hard to not arise any communist suspicions about their intentions and so has very much reduced their use of red in favour of more blue and since their psychologist marketing experts feared that as 'too cold' increasingly umber.

Violet/purple can stand for "The Violets", VOLT, Feminist movement

–– Wikipedia: Politische FarbeDue to the voting system, not all parties get into the bigger parliaments. Those that do or did can be found listed here.

I think the question already covered all the informal names for coalition agreements inspired by the colors of the parties matching the flag of a foreign country.

Not the answer you're looking for? Browse other questions tagged terminology germany flag coalition .

8
What caused the SPD to gain in opinion polls in early 2017?