How much money would legalizing marijuana (both state and federally) save the US goverment on average?

One of the arguments for legalizing of marijuana is that it is suppose to save a significant amount of money spent in enforcing laws against the crime. Some of the cited supposed savings are:

There would be some expenses to legalizing marijuana as well, such as cost to the FDA to monitor marijuana sales and enforce any appropriate safety procedures, and possible some other law enforcement costs caused by people acting under the influence of marijuana, but generally marijuana proponents claim a net savings of expenses.

Has any report or study been done that attempted to properly identify these theoretical savings, and costs, of legalization and put a dollar amount on total savings that legalization of marijuana may provide (or increased costs, if marijuana legalization increases total spending instead of saving money)?

According to CATO (page 5), the "State-Level Expenditures" of marijuana prohibition in the US was $5,386,753,000 annually, as of 2008, a figure encompassing judicial, incarceration, treatment, and other costs.

On the federal level specifically, according to the U.S. Sentencing Commission's 2018 numbers, there were 2,118 federal inmates incarcerated for marijuana offenses. According to the Federal Register, each inmate costs an average of $36,299.25 (in 2017, the latest figure available). That math implies a $76,881,811 annual cost to taxpayers for federal marijuana inmate incarceration.

To estimate potential tax revenue, I added the amounts collected in WA, CA, and CO, as reported by Forbes:

Washington made the most in taxes last year with an estimated $319 million. California was close behind with $300 million while Colorado recorded the third-highest estimated tax revenue with $266 million.

I will not try to estimate your part about "Less tangible indirect savings", because that's probably less objective, but If anyone has some figures for that, please share.

This is a difficult question because calculating a net benefit involves subtracting from the taxes on marijuana losses on other things. I don't know of a federal estimate, but some state-level data exists:

In 2018, Colorado legal pot sales topped $1.2 billion, with the state pulling in about $270 million in taxes. Compare that to the approximately $45 million that the state collected in tax on alcohol that same year.

A study from Georgia State University found that alcohol sales fell by 15% in states where only medical marijuana had been legalized and by 20% in counties where recreational marijuana is sold legally. However, the states made more than enough back from marijuana sales, since marijuana taxes are typically greater than alcohol taxes. [...]

However, there are a lot of questions about how much tax revenue states will actually earn, especially considering that some states have missed their projections by a long shot. 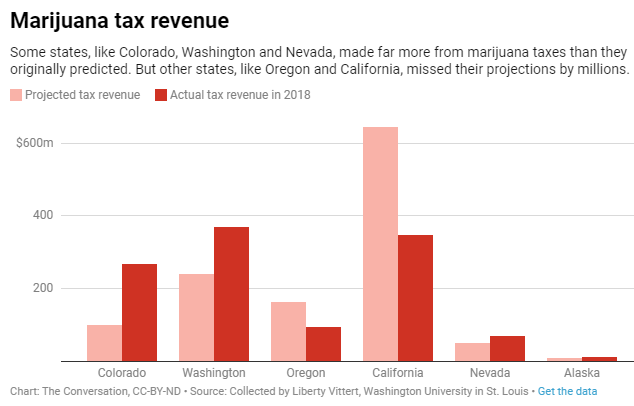 While projections for other types of goods are typically more reliable, this is an entirely new market and therefore prone to error. Why? Well, the jury is still out. Some researchers and pundits have guessed that in California taxes are too high, that the black market is too strong or that the red tape of bureaucracy is just too much.

Let's first sort out the small potatoes from the big ones.

Yet what is the demonstrated effect on the GDP of a comparably addictive substance that has gained widespread adoption? According to the CDC, marijuana addicts 1 in 10 users and 1 in 6 youth users. 30% develop a substance use disorder for it. By comparison, alcohol is estimated to addict somewhere between 9 and 15% of drinkers, depending on how addiction is measured. So in terms of order of magnitude of those who become addicted, we have a familiar analog.

Just how impactful is this addiction? Consider the following chart from the Washington Post: https://www.washingtonpost.com/news/wonk/wp/2014/09/25/think-you-drink-a-lot-this-chart-will-tell-you/

According to the chart, the top 10% of alcohol-consuming American adults drink on average nearly 74 alcoholic beverage-equivalents per week. There is no way that these people--10% of the American adult population--are not perpetually inebriated.

Not even taking into account loss of life or limb through accidents, addiction treatment, and illness, perhaps 10% of the American GDP is lost to alcoholism by never being created in the first place -- one hundred times the projected "savings" due to decriminalizing and legalizing marijuana use.

With comparable addiction rates, we can reasonably expect that if a similar number of people begin using marijuana, the (practically "unseen") losses to our GDP could also be of the same order of magnitude. Even assuming that a recent nationwide average of 12% of Americans having used marijuana stays the same under nationwide legalization, the projected losses due to incapacitation and addiction are still easily a whole order of magnitude above the projected "savings".

A building contractor I met in Colorado says he now requires five workers to do the work of three since the state became a haven for recreational marijuana use. Tardiness and absenteeism in marijuana users has been noted to be markedly increased over non-users. This anecdote is consistent with an observed 75% increase in absenteeism to those who use marijuana at all (not just those 10% who are addicted; these are people who were able to get a job in the first place!). Even laying aside increases in workplace accidents and injuries due to impairment, as well as the more difficult-to-measure effects of decreased productivity and the opportunity cost of non-participation, this figure is by itself a notable remark on the true cost to legalize marijuana.

In all, $1.9 Trillion is a rather large and sobering sum I would think.

Not the answer you're looking for? Browse other questions tagged united-states law economy drugs reference-request .

25
How would the trillion-dollar coin save the United States' economy?
11
How much of the deficit would be reduced by increasing taxes on the top 1% to 1990s levels?
2
How (and how much) does the government shutdown affect the budget deficit
3
How are political staff (both congressional and campaign) paid in the US?
13
What would happen if the same person were elected both President and Vice President?
1
How much money did Obama's Ebola czar Ron Klain donate to the Democratic Party?
15
How much richer is the average member of the US Congress than the average professional in their district?
3
How much would the US economy suffer if they stopped military spending?
4
How much money did the United States spend on the Iraq war, and how much money did US oil companies gain as a result of the new Iraqi constitution?