Why do Muslim refugees seek asylum in Europe and not in rich countries in the Middle East?

Implicit in your question is the assumption that Muslims should have some kind of kindred sympathy toward their Muslim brethren in other countries. We have to dispense with that kind of thinking; it's not really true of any race, culture, or religion anywhere in the world.

There were apparently no laws for asylum seekers in any Gulf countries until autumn 2018.

Qatar passed Law No. 11/2018 on Organizing Political Asylum on September 4, 2018, alongside two other laws regulating residency in the country. One abolished exit permits for most migrant workers, and the other allows people for the first time to apply for permanent residency. Both point to Qatar’s increased respect for international standards, but, as with the new asylum law, neither fully aligns with international human rights law.

And as the HRW article goes on to detail, there are quite a few caveats in the Qatar asylum law. And by Feb 2019, they had not accepted anyone under that law:

The government has so far failed to implement a law passed in September 2018 that sets out the standards for granting asylum and the rights and benefits for people granted asylum in the country. The government says that the infrastructure necessary to enforce the law has not yet been set up.

Outside of Gulf countries per se, Turkey (as you probably know) has taken in quite a few Syrian refugees, but their legal status is rather recently decreed and as with many other things in Turkey recently, the legal facade is sometimes not that relevant in practice.

In 2013, Turkey adopted its own legal framework on the protection of asylum seekers and refugees. In October 2014, Turkey also adopted a regulation under which it grants Syrians temporary protection. As of June 28, 2018, Turkey said it had registered 3,562,523 people under the regulation. Registered Syrians are entitled to assistance. Even though the regulation says Syrians who fail to register will not be deported to Syria and will only face an “administrative fine,” Human Rights Watch found that unregistered Syrians have been deported for not having temporary protection permits. [...]

Agencies said their extremely limited contact with unregistered Syrians means they can neither estimate how many unregistered Syrians now live in Hatay and other [Turkish] provinces, nor the extent to which the registration suspension has led to deportation and denial of service access.

There are approximately 1.5 million Syrian refugees in Lebanon; however, 74 percent lack legal status. Authorities heightened calls for the return of refugees in 2018 and municipalities have forcibly evicted thousands of refugees.

And even those that do have legal status, what they seem to have is a "circulation permit" that entitles them for a 12-month stay in Lebanon while UNHCR is trying to resettle them in other countries.

Muslim refugees mostly do not go to rich Middle Eastern countries because they are going to middle-income or poor ones. Lebanon is very nearby, and arguably has a Muslim majority.¹ There are nearly a million refugees in Lebanon.² The population of Lebanon in total is about ten times smaller than that of Germany, but they host similar numbers of refugees. Similarly, Jordan hosts 762,420 refugees.³ Others have mentioned Turkey. In other words, these Muslim states are taking in lots of Muslim refugees—there is no discrepancy.

There are a couple of reasons internal to the Gulf that mean that refugees tend not to go that way. The BBC points out that it is simply very difficult to reach the Gulf, compared to Europe.⁴ It is possible to attempt to reach Europe via Turkey, which borders Syria. On the other hand, the Gulf states are not really accessible by land. It is worth noting, however, that there are ½ a million Syrians in Saudi Arabia, and in some cases their residency permits have been extended. The root cause is presumably because of a political belief that foreigners should not be welcomed; I happen to view this as a moral failing but that’s a value judgment not asked for in the initial question, so I’ll leave it there.

I would also point out that the main source of refugees is Syria;⁵ we might then include Iraq. So a final set of reasons is simply that conflicts displacing people happen to be closer to Europe and the poorer Middle Eastern states than they are to the Gulf. Arguably that is because their governments do not have oil money to pay off their populations.

There is a vast difference in the immigrant and refugee acceptance in those two parts of the world. It has both cultural and economical grounds.

EU and friends (Turkey included, edit: to lesser extent, but still here: Lebanon and Jordan): most of the society's wealth comes from people working and creating products and services. The fact is recognized at both cultural and policy level for centuries. Most of those countries (except probably Turkey) are demographically unsustainable. OTOH, religion (of any kind) is generally seen more of a noise rather than a big deal. The numerous previous migration waves caused few problems and a lot of benefits. Result: new people are generally welcome. Well, there can always be problems here and there, esp. with the first-gen migrants coming in big numbers. The problems are either solved or lived with until the second generation takes over.

Rich middle-east countries: wealth is way less (no matter what rich people there say and do), a significant part comes from few sources (oil and likes) and is distributed from top to bottom. Societies have gross inequality and are kept stable at rather high (both social and monetary) price. People are seen as receivers (and not generators) of wealth at both cultural and policy level. Even minor religious differences are considered important - again both at cultural and policy level. People coming from outside are recognized as invaders and dealt accordingly.

Since I cannot reply with a comment if we look at @Ahmed's data, we note that Egypt is farther from Syria than Kuwait (there are roads South of Baghdad towards the border).

On the other hand, the Gulf states are not really accessible by land.

I do agree with @Fizz that we do need data on the current Syrian population in Saudi Arabia and other gulf states; we must consider that the sources used to get the data quoted by previous replies might just not be complete. I would expect/hope that Kuwait, Qatar, UAE, and Bahrain are at least financially supporting the neighboring countries in the Middle East and North Africa which are hosting the refugees. 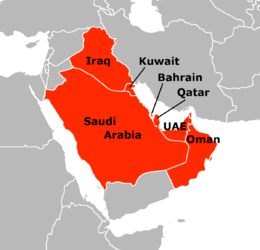 Not the answer you're looking for? Browse other questions tagged european-union middle-east refugees .