Is the median age of Presidential candidates increasing?

Looking at the current list of likely candidates for the 2020 election we can see:

Likewise in the previous election 70-year-old Trump was facing 69-year-old Clinton. Does this signify a general trend towards older Presidential candidates?

"Presidential candidates" is a tricky term to define, and a large dataset to gather. Taking the ages of Presidents when first sworn in (comparitively easy data to obtain), and assuming that this is a good approximation for age of candidates despite the notes below, it looks instead like the median age has, broadly, been decreasing. 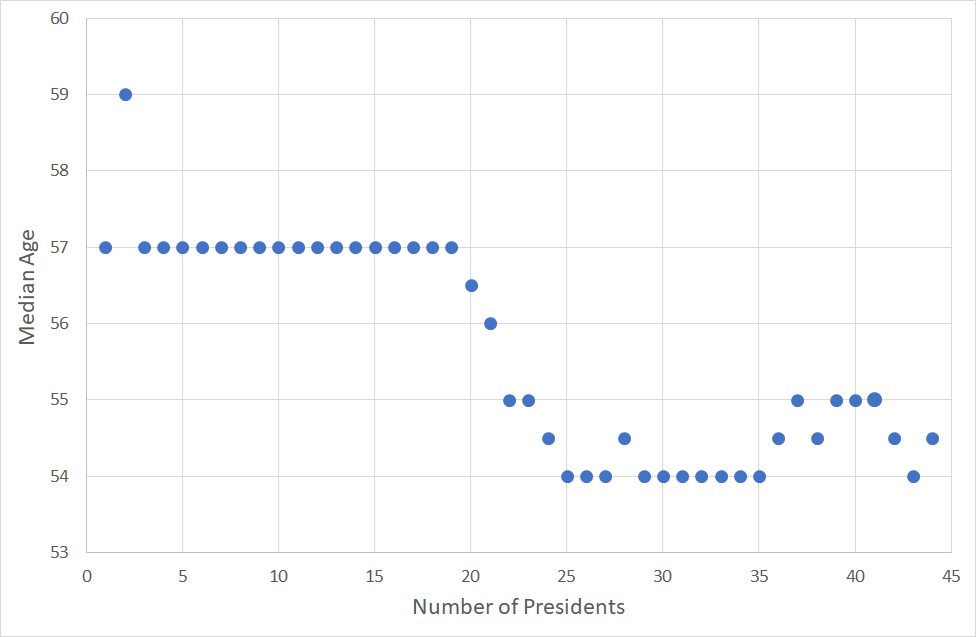 8
What were the events that led to the anti-establishment candidates we are seeing run for office?
47
Why aren't Republicans more focused on mobilizing a movement towards 'dethroning' Trump?
8
Do any 2020 Democratic Presidential candidates support a 0 copay 0 deductible Public Option?
8
How many countries have single-payer healthcare with 0 copays and 0 deductibles?
4
Is there are reason why: Leading 2020 US Presidential Candidates are over 70 years old?
5
Are the partial results announced in Iowa consistent with prior polling in the state?
3
Which countries with single payer healthcare ban duplicative coverage?
11
Why are Democrats favoring unusually old presidential candidates lately?
2
Have politicians elaborated on their use of the term 'the Big Lie' in reference to US election fraud claims?
3
Is there research to support the claim that "expanding the electorate" is an unworkable strategy?