Why does the Remain Alliance not contest all Northern Ireland seats?

With its abstentionist policy, Sinn Féin cannot be counted as a remain party for the purpose of the election. Sinn Féin will effectively abstain in any voting on Brexit, while a remainer MP could vote against Brexit or in favour of the referendum. Moreover, it is likely that a few seats difference may change the outcome of the election. Why does the Remain Alliance give some seats in Northern Ireland to Sinn Féin without even trying to contest them?

It's not like all Northern Irish parties are abstentionist. SDLP is running for the seat in Belfast South. If it's possible there, why not in other constituencies?

The only explanation that comes to my mind is the fear of splitting the vote and helping a Leaver candidate to be elected. But the Remain Alliance does contest a lot of Labour seats, so there must be some other reason.

Source: This tactical voting comparison site recommends voting for Sinn Féin in 9 constituencies, which presumably means there is no Remainer candidate there.

Your premise is incorrect.

As The Alliance Party of Northern Ireland is standing in all Northern Irish constituencies, the 'Remain Alliance' is effectively contesting all seats. They furthermore are refusing to acknowledge any pacts, which they regard as anti-democratic. Though the evidence suggests that at the very least, other parties are choosing to operate as if they were in a pact.

But what about Belfast West?

As happens everywhere, Northern Ireland's constituencies vary. Some are strongholds, others are swing seats. Just browse Wikipedia's article on the region's constituencies to see relevant history.

Let's consider Belfast West. This has been a stronghold of Irish republicanism since the 1960s, first Republican Labour, then the SDLP, and then almost entirely Sinn Fein. For the last two decades Sinn Fein have won between 60 and 70% of the vote in Belfast West. It is one of the most republican communities anywhere on the island of Ireland.

So... why would anyone else bother trying there? Especially when choosing not to stand in such a place could be used to help barter a swap somewhere else, like Belfast South.

Sinn Fein have agreed to withdraw from Belfast South: implicitly to help Alliance or the SDLP as they are all anti-Brexit. So there is some sort of game playing going on locally. Curiously, the SDLP are still standing in Belfast South, and the Green Party have decided not to stand to support them, while the UUP have decided to contest the seat, which has frustrated the DUP; who are concerned about splitting the unionist vote.

The fact Alliance party is standing in Belfast West, and not withdrawing for Sinn Fein, may seem odd given the probabilities involved. But in Northern Ireland whether one is a nationalist or unionist is the penultimate political question. If Alliance party was seen to be making a pact with Sinn Fein it would alienate many of their unionist voters given Sinn Fein's absolute commitment to a United Ireland, which may be fatal.

The whole point of coalitions is regional give and take to maximise collective gains. This is why the Brexit Party have said they will not contest Conservative safe seats, and will instead go after Labour ones. There has also been an agreement between the DUP and UUP over Tyrone.

Here is a recent BBC map of which UK constituencies have majorities of less than 10%. You may notice that Belfast West is certainly not one of them. The 'Remain Alliance' has no motivation for contesting such a seat when they already have allies there. And even if they didn't, they are native to Great Britain, not Northern Ireland, and do not have the ability to stand there... as much as I'd be amused to see the Welsh nationalists of Plaid Cymru as an option when voting in Northern Ireland. 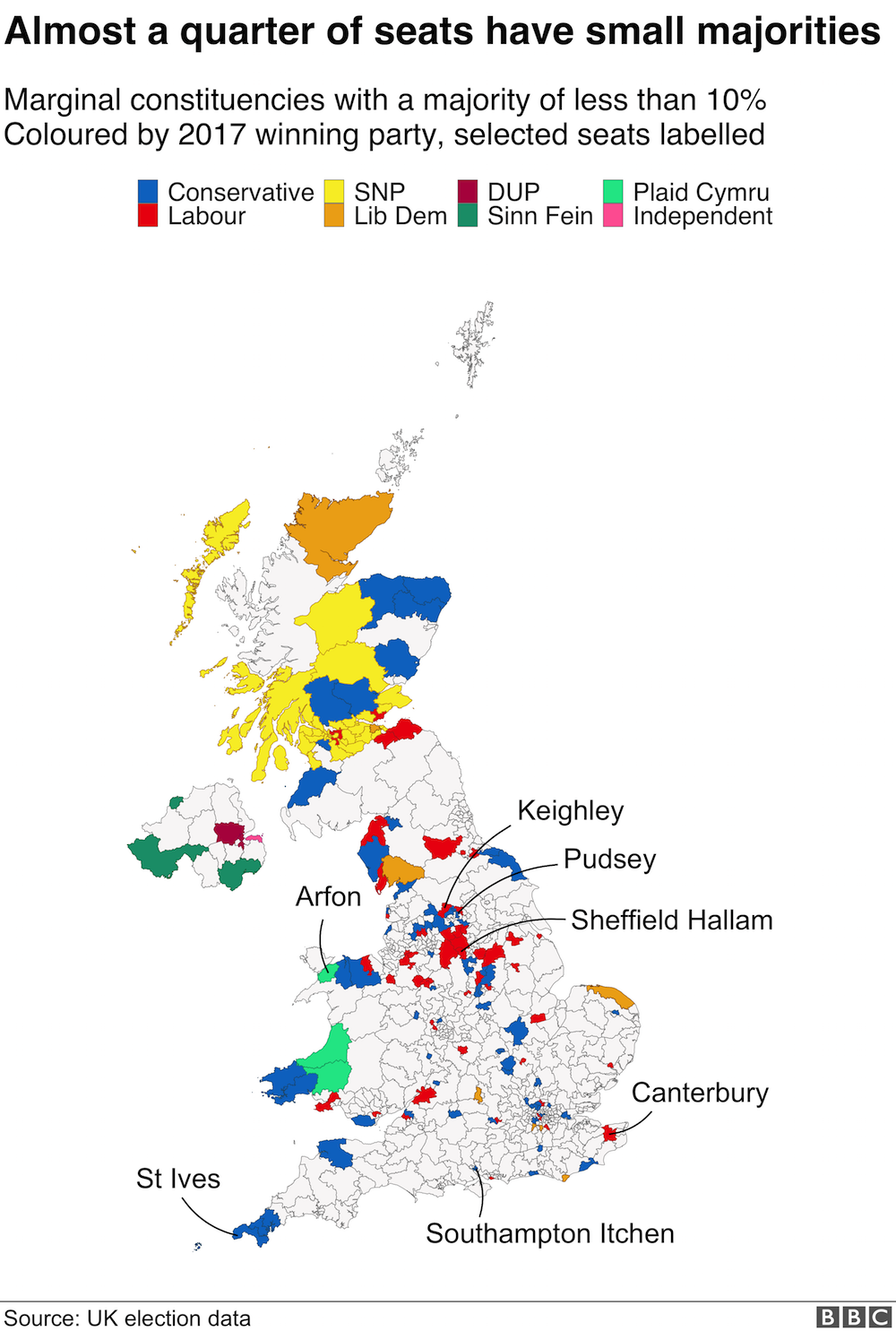 It is unlikely that any Great Britain parties will get particularly far in Northern Ireland.

Most Sinn Féin voters believe that Northern Ireland should break away from the United Kingdom and join the Republic of Ireland. It is difficult to see many Sinn Féin voters voting for a party that believes Northern Ireland should remain in the UK, which all of the main pro-Remain parties in GB believe. It therefore makes sense for them to focus on their campaigns in Great Britain.

As for parties in Northern Ireland, there is a pact that was formed between Sinn Féin and the SDLP, both of which are Irish Nationalist parties. The pact has Sinn Féin standing down in some seats, and the SDLP in others, to hold off a challenge from the pro-Brexit DUP.

If the Remain Alliance campaigns against Sinn Féin they risk taking enough votes away from Sinn Féin to let a (pro-Brexit) DUP candidate win the seat.

It's much better to have an abstentionist Sinn Féin MP than an actively pro-Brexit DUP MP.

Not the answer you're looking for? Browse other questions tagged united-kingdom election brexit house-of-commons northern-ireland .

16
Why are left-wing unionism or right-wing Irish nationalism unsuccessful in Northern Ireland?
5
Which UK polls//surveys provide information at a constituency-by-constituency level, for the upcoming EU elections in May 2019?
13
Would the Republic of Ireland and Northern Ireland be interested in reuniting?
3
Has Boris Johnson's government explained why its latest Brexit proposal does not include a referendum for Northern Ireland leaving the single market?
9
Why is Labour sticking with Jeremy Corbyn?
3
The Belfast/Good Friday Agreement and the revised Ireland/Northern Ireland Protocol
5
Can candidates for MP seats “stand down” in a formal way after declaring candidacy?
12
Is there any evidence that the Brexit Party simply didn't have the resources to field as many candidates as they claimed?
4
What, if anything, are the consequences of nationalist parties winning a majority of constituencies in Northern Ireland?
4
Is it possible for the Alliance Party of Northern Ireland to form a Government if they win a majority?