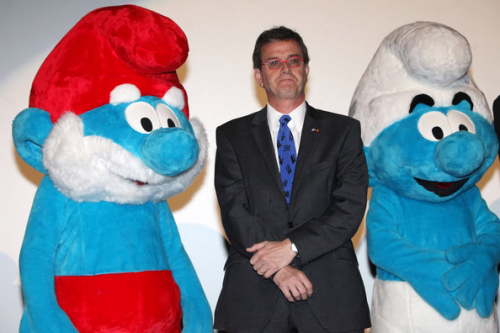 Aside from Obama fundraiser, Howard Gutman (Pictured Above, the one who is not a smurf)

Anything along the lines of The Vaticans?.

Are there any examples of sexual or criminal scandals amongst any contemporary presidents choices for Ambassador?

Randall L. Tobias was the U.S. Ambassador of the U.S. Agency for Intentional Development and the deputy Secretary of State under George W. Bush. He was forced to resign after it came to light he had used an infamous D.C. prostitution service (the same service, incidentally, that would destroy New York Governor Eliot Spitzer's political career).

The Russian press reported that Bush's Ambassador to Azerbaijan Reno Harnish was recalled because of his involvement in a prostitution and human trafficking scandal in that country. No allegations were ever proven, and given the Russian government's heavy influence in the media, those allegations should probably be taken with a grain of salt.

In recent years, it's true that U.S. ambassadors have often been embarrassments. The advent of lightning-fast communication channels have made the entire purpose of ambassadorship largely ceremonial, so ambassadorships to close U.S. allies are typically given to unqualified party loyalists. Barack Obama is not the first president to do so, and I doubt he'll be the last.

Not the answer you're looking for? Browse other questions tagged international-relations president financing .

14
Why do some criticize Kasich's advice to a female college student?
54
What does the POTUS do, exactly?
0
Are any Presidency and national job number change correlations provably causal?
3
Ability of the President of the United States to contact other nations in secret
3
is partially publicizing international negotiation really bad behavior?
0
How many treaties did US presidents terminate without Congress approval?
6
Is there any precedent for refusing to withdraw an ambassador on grounds of illegitimacy?
14
Is there a preferred time in their presidency when US presidents pardon the most people?
19
Was Nixon right, and if so, to what degree was he right, when he said that “… but when the president does it, that means that it is not illegal.”?
2
Have there been any sitting US presidents that regularly consult a former president, even informally?