Is there a preferred time in their presidency when US presidents pardon the most people?

According to a tally by Thoughco Trump seems to be in the last place as far as pardons issued, compared to all presidents since 1900. But are these stats misleading given that Trump's presidency is still ongoing, i.e. were past presidents more likely to issue pardons at the end of the term?

Or maybe in [the end of] their 2nd term?

President Obama granted just 22 pardons in his first term, the lowest number of any president since George Washington.

That number may a be a little misleading as Obama preferred commutations and eventually issued more of those than any other president on record. But even considering commutations, Obama has apparently issued the most in 2016:

Obama was particularly active in granting clemency later in his tenure. In the 2016 fiscal year, which ended Sept. 30, he granted clemency 589 times, including 583 commutations and six pardons. That was the most of any president in any fiscal year since 1920, when Woodrow Wilson issued 341 commutations, 198 pardons, 57 respites and 43 remissions for a total of 639 acts of clemency, according to DOJ.

Are there more comprehensive statistics on the time distribution of pardons within presidential terms?

The most popular month for both Pardons and Clemency is December, during the holidays. Clemency (commuting the sentence without restoring rights) is far more popular among modern presidents than Pardons. For example, Nixon granted clemency to 653 people during the Decembers he had available compared to the 274 he made in all of the other calendar months combined. For George W. Bush, around 50% of the acts of clemency was made during the December Holiday Season.

Indeed, an analysis of 12 presidents covering 10,626 pardons and commutations shows that December is the most popular month with more than two times the number of pardons compared to the next most popular month. 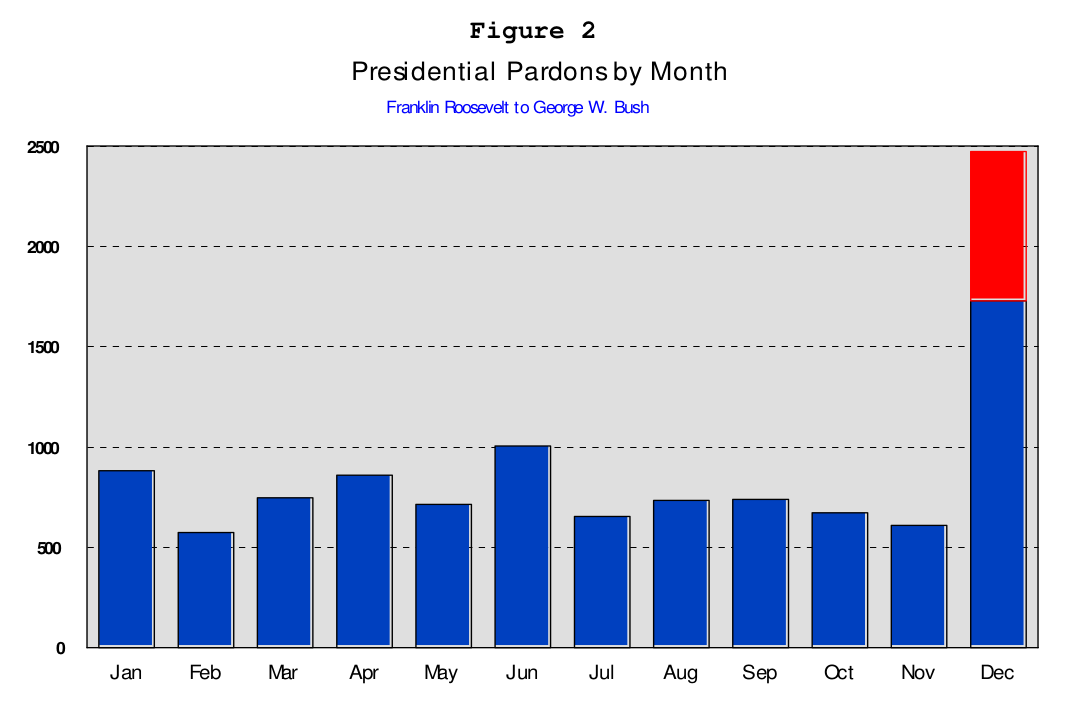 8
Why do people talk about the "first 100 days" of a presidency?
6
Who runs the USA when the presidents are switching?
21
Is there any time limit that the President has to obey when speaking of signing a law?
34
Is there a legal way for US presidents to extend their terms beyond two terms of four years?
7
Were there no leaked phone calls of US presidents before Trump's presidency?
6
What is the history of presidents making personal attacks against their successor?
6
What are the restrictions that a President has when issuing a pardon?
3
Who would rule on the validity of a self pardon if there were one?
23
Why did Trump rescind his executive order that barred former White House employees from lobbying the government?