Looks like the Gaza Strip has high naturally occurring fluoride in it's water. Greater than the suggested beneficial amount of 0.7-1.0ppm.

"Except for the north area, the average concentration of fluoride in the groundwater in the Gaza Strip is higher than the WHO standards (1.5 mg/l). The most affected areas are Khan Younis (2.7 mg/l) and Rafah (2 mg/l)"

"Groundwater from 73 municipal and 21 private wells were analyzed for Ag, Al, As, B, Ba, Cd, Co, Cr, Cu, Fe, Hg, Li, Mn, Ni, Pb, Sr and Zn over a 3 year monitoring program in the Gaza Strip. The results show that the trace elements of the groundwater of the Gaza Strip do not generally pose any health or environmental hazard. In spite of that, only 10% of the municipal wells meet the WHO standards. Cl-, NO 3 − and F- concentrations exceeded 2–9 times the WHO standards in 90% of the wells tested with maximum concentrations of 3,000, 450 and 1.6 mg/l, respectively. Several private wells should not be used for drinking purposes as the average of Zn, Cd, Pb, Fe and As was 58, 30, 270, 468 and 10 μg/l, respectively. A severe water dilemma will appear in the near future from both quality and quantity aspects"

Don't think so. In case someone else finds this link (below), it is talking about the Texas Palestine. http://www.palestineherald.com/news/local_news/article_3f608ff4-21c0-5148-b42a-ace74d4a9ce6.html

It isn't listed on "The extend of fluoridation" by the British Fluoridation Society: http://www.bfsweb.org/onemillion/09%20One%20in%20a%20Million%20-%20The%20Extent%20of%20Fluoridation.pdf

Hopefully not, though I wasn't able to find any hard data.

According to UNICEF "Waterfront" article "Fluoride in water: An overview" about fluorisis about endemic diseases caused by naturally occurring overabundance of fluorides in drinking water, "Palestine" is in the wide blue band of problematic countries stretching from Morocco in the west to China and Japan in the east (this seems to be geographically/geologically clustered, and independent of poverty since the list includes Japan, Australia, Kenya and Bangladesh; but I didn't dig into research as to what the proposed reason for the band are). 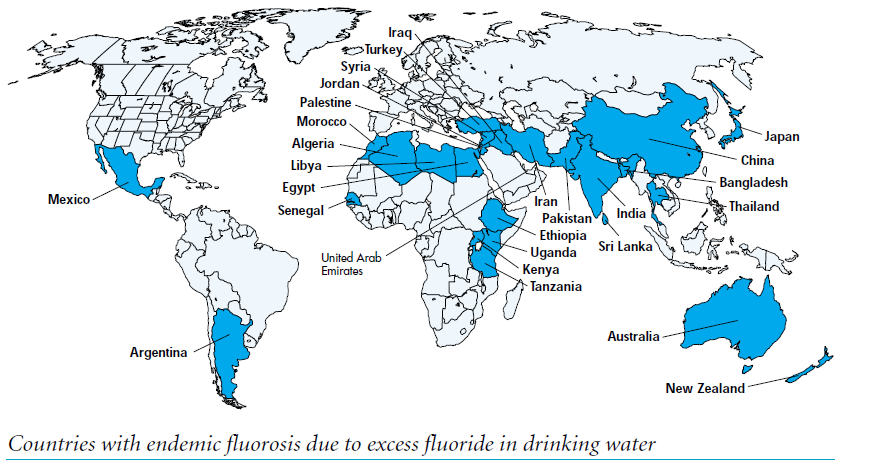 24
What is Israel's long-term plan in the West Bank?
22
What is the current meaning of "Palestine"?
15
Does it make sense for Jordan & Egypt to annex Gaza and the West Bank?
2
Do Japanese governments support fluoridation?
16
Can one leave the Gaza strip permanently?
4
Does moving the US embassy to Jerusalem make a three-state solution more likely?
9
Why did Egypt start the blockade of the Gaza Strip?
8
Why do the Palestinians in Gaza not declare an independent state?
3
What are the exact terms of the recent Israeli-Palestinian cease fire?
5
How many Congressional Democrats support a one-state solution?