Are members of the military allowed to wear civilian clothes when testifying in Congress?

The question is sparked by the attention that media has to military personnel wearing dress uniform when testifying in front of a US Congress committee, calling it "pulling the soldier card" in regard to Lt Col Vindman.

Also, US congressman from Utah mentioned that it is not required to wear uniform.

The US Navy mention that:

All uniformed naval personnel testifying before Congress or attending Congressional hearings will wear service dress blue throughout the year, regardless of season.

Is it allowed for active military personnel to testify in public hearing in the Congress wearing civilian clothes?

Also, my question is inspired by this quote from West Wing TV series: 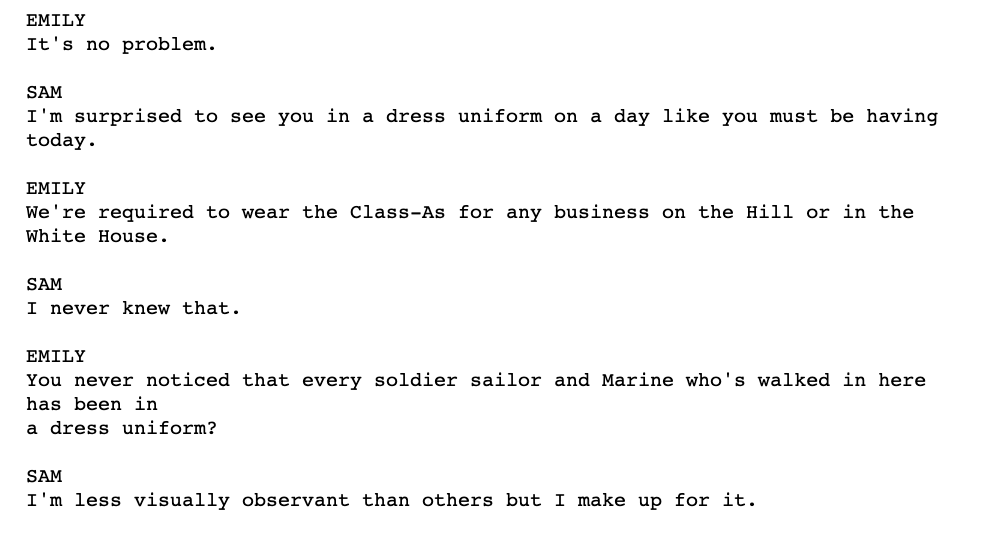 According to an article found by JoeW in Stars and Stripes (an independent daily military newspaper authorized by the DoD), wearing a dress uniform while testifying is not strictly required, but is routine, and would not have raised any notice if not for the political issues involved

Active-duty service members routinely wear their full dress uniforms to testify on Capitol Hill. But security experts say the scrutiny of Vindman’s uniform has become another data point in the politicization of the space between civilian society and the military.

The Army’s guideline for appearance standards, AR 670-1, says all personnel “will wear an Army uniform when on duty, unless granted an exception by the commander to wear civilian clothes.”

“Most reactions to it imply a choice where there is not one. Commentators are projecting their own feelings without understanding military regulations, a pretty frequent occurrence in civil-military relations,” said Loren DeJonge Schulman, a former Obama defense official who advised national security adviser Susan E. Rice.

Military officials assigned to the NSC typically wear formal civilian clothes on a council blended with many other agency representatives, said Steve Miska, a retired Army colonel who served on a rotation at the NSC in 2011.

However, wearing a dress uniform during testimony is “probably appropriate” for Vindman, he said. “That’s your dress attire expected for that level of formality.”

The same article also discusses the powerful symbolism of the uniform, and how attacks on Lt. Col. Vindman's choice of outfit are intended to question his service and patriotism to blunt the effect of his testimony:

“The outsize symbolism attached to uniform is like a totem that everyone wants to co-opt to say, ‘I can use this to my advantage,’ ” said [Former Army Officer Jason] Dempsey, who writes on civil-military affairs as an adjunct senior fellow at CNAS. ...

Attacks have concerned officials to such a degree that the Army is “providing supportive assistance to help Lt. Col. Vindman with the public attention,” an Army spokeswoman said.

“Its fascinating how quickly they will abandon anyone in uniform if they don’t fill preconceived notions of who you should be support,” Dempsey said, referring to public conceptions that troops identify as conservatives.

“There’s almost this knee-jerk, immediate reaction to undercut the validity of his service.”

No. As a general rule, while on the job, military personnel are required to wear uniforms and the combat uniform, the service uniform (Dress Blues in the Navy), and the Mess Uniform (Dress White in the Navy). Combat Uniforms are work casual and are your standard camo uniforms (except the Coast Guard's which are solid blue) and typically given a different pattern for different branches (Army, Marines, and Airforce all have different camo patterns with various shades of green. Navy has a blue camo pattern, Coast Guard has solid blue uniform). According to a military buddy, these are actually pretty comfortable to wear.

Service Uniforms are the military equivalent of formal office wear and would be worn anytime a male civilian would be expected to wear a suit and tie (court martial, meetings with politicians or VIPs including Congressional testimony, press conferences). The Mess uniform is for formal events, such as service balls and galas, promotion ceremonies, change of command ceremonies, weddings (traditionally, especially in the Navy and Marines, though I'm fuzzy if it's a rule or just a de facto thing).

As a rule, you are expected to be in proper uniform while performing your duties unless a few exceptions. For example, rank isn't worn in forward operating bases (for the same reason Lt. Dan told Forest and Bubba to not salute him when they first meet) or if you are a guard of the Tomb of the Unknown Soldier (because no one is allowed to outrank the Unknown Solider... save for George Washington, who is by law the highest ranked person in the United States military for all time). Additionally since the Navy provides many of the non-combat service roles for the Marines (JAG, Doctors, Chaplains), Navy personnel assigned to Marine units will wear marine combat uniforms while embedded with the unit.

It is possible for military personnel to be given orders to dress like civilians. Generally this means that they are being ordered to go somewhere and/or do something that the military officially doesn't want to be associated with doing or going to. This is usually done when it's in the best interest to avoid the the implication of people who clearly work with the military being there for whatever reason. And it's avoided unless absolutely necessary (if captured, being in a clearly identifiable uniform is one of the four requirements for Geneva convention protections for Prisoners of War. This is important as you're not allowed to torture or kill POWs once they surrender (and you can't shoot them if they escape a POW camp and later surrender again... Only while they are still resisting by running away). With out a uniform, you don't qualify and you go to the enemy nation's criminal justice system. Hope they have respect for due process and human rights... though most enemy nations of the U.S. aren't all that great in almost all historical contexts.). So while these orders are rarely issued, they can be... and they are sometimes more serious than your bog standard "casual Fridays."

Oh, and you're not really supposed to consider Congress as an enemy*, considering they pay for all your cool toys... and a lot of prohibited practices in the Geneva Conventions are perfectly legal for a nation to use on it's own personnel (you can not use tear gas enemy soldiers. But you can gas your own troops all you want as far as War Crime tribunals are concerned. That said, as bad as it sounds, being grilled by that idiot in congress, [Insert name of preferred congressional idiot here], for five minutes is not a violation of Geneva Conventions on use of torture.

According to DOD policy, the proper term for a hostile force is "adversary" not "enemy". The U.S. Army's greatest and only enemy in every war is the U.S. Navy. (It's a bit of inter-service rivalry humor and if you ask any member of any branch, they are more than willing to rescue a member of another branch... they will also be officially grateful to another branch saving their bacon... unofficially, they will bitch about being saved by worst service in the military the whole way back to the safe zone.)

(Thank you Air Force for spelling this out. I know the Navy has a similar requirement, and I would be shocked if the Army and Coast Guard where any different. I did find a Marine Corps instruction, but it was 15 years old so I went with the Air Force example)

1.2.15. Mandatory wear of the Service Dress Uniform. Airmen will wear the Service Dress Uniform, unless directed otherwise by competent authority [... lists various authorities...] in appropriate circumstances. Some examples include but are not limited to: when officially visiting Congress or congressional offices; the White House or Supreme Court; when officially visiting high ranking executive branch, legislative branch or judicial branch employees...

Note, however, that these images document private testimony. But Lt. Col. Vindman is definitely in civilian attire while on duty.

Public testimony may require Lt. Col. Vindman to be in uniform. But these images are proof that Lt. Col. Vidman does not have to wear his uniform at all times while on duty, despite other postings to the contrary.

Not the answer you're looking for? Browse other questions tagged united-states congress military .