Why is it ethical for Ambassador Sondland to have been given an ambassadorship for campaign contributions?

Ambassador Sondland donated 1 million dollars to Trumps inauguration, and then was appointed to a high profile ambassadorship. He never worked in the government previously, has no credentials, no experience in international diplomacy, but somehow found himself in a high value role in the state department.

Why has this not been investigated and treated as a Pay to Play appointment? This seems like the easiest of all charges that Democrats could be charging against Trump.

This has a long tradition in the US. Before World War II, most ambassadors were actually political appointees rather than career diplomats. Trump might be marginally worse than Obama and reverted back to a level of political appointment last seen under FDR but everybody is doing it. Consequently, using this as a charge would promptly backfire for Democrats.

The practice of giving ambassadorships purely in exchange for (large) campaign contributions was seen as somewhat problematic even in the US, which passed a law in 1980 attempting to mitigate this. But that law was apparently very easy to circumvent, with the practice of large donors becoming ambassadors exacerbated (again) under G. W. Bush and Trump. (Do note that this practice of an apparent quid-pro-quo with large campaign contributions is different from merely political ambassadorship appointments, which have a broader tradition in the US, even though that tradition in itself is less common in other countries.)

Some but not all Democratic candidates for the 2020 election have pledged to substantially curtail the practice.

While noteworthy that 73 percent of political nominees donated, it is perhaps more surprising that 27 percent did not. The common assumption seems to be that those who become ambassadors without first entering the Foreign Service must have paid their way into office. The surprise largely dissipates, however, upon closer scrutiny. A clear majority of the 27 percent are individuals with high-level experience in the executive branch or Congress—such as Deputy Chief of Staff at the White House, Chairman of the Joint Chiefs of Staff, and members of the House or Senate—all of whom appear capable of using their influence or personal connections to the president, rather than financial support, to secure a nomination. [...]

The picture for career nominees is much different. From 1980 to 2019, only 5 percent personally contributed, and their contributions averaged only thirty-three dollars. [...]

Another way to think about the role of money is to examine whether campaign contributions affect bilateral relationships to different degrees. Figure 4 addresses this issue by depicting, for each state, the percentage of the nominees who made financial contributions to the nominating president, with values ranging from 0 percent (white) to 100 percent (black). The data establish that donors were most common among nominees to politically stable and economically developed countries, particularly in Western Europe. 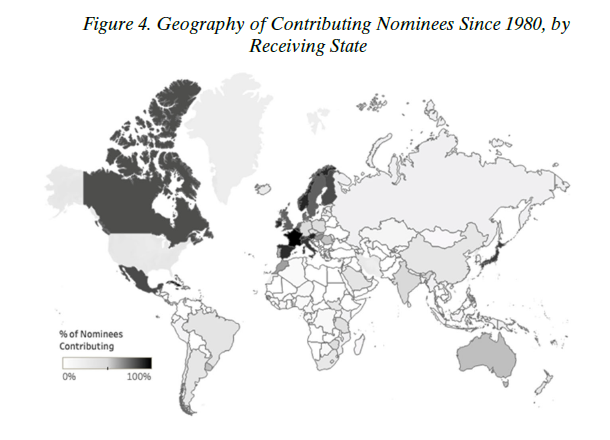 This doesn't, of course, answer whether this is ethical or a good idea, other than to justify it with tradition.

There are also some stats over time on contributions by would-be ambassadors: 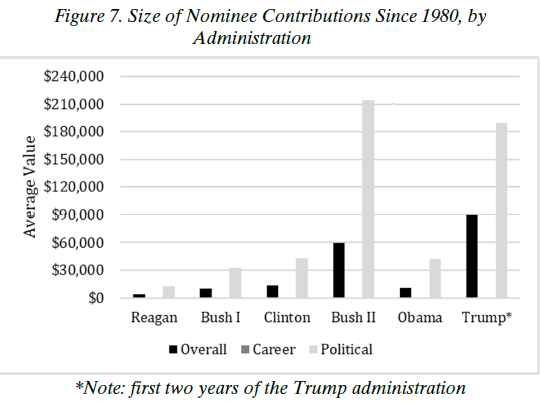 This pattern (of contributions) is a bit different than merely looking at the percentage of political appointees. G. W. Bush and Trump are clearly outliers here with much larger campaign contributions (from would-be ambassadors) than the rest of the presidents since Reagan.

Also Sondland is not actually the largest such example from the Trump era:

United Nations ambassador Kelly Craft and her husband contributed over $2 million to Trump’s election campaign and inauguration. She also gave generously to over half the Republican senators on the Foreign Relations Committee that had to approve her nomination.

Some but not all Democrats do seem to see as unethical the appointment of large donors:

Democratic presidential candidate Sen. Elizabeth Warren has said she will appoint no big donors as ambassadors — period. But when I have contacted the campaigns of every other person seeking the nomination to ask if they would make a similar pledge, I have been met with silence. That is because, in Washington, money does the talking.

And according to a 2017 study cited by the Washington Post, the US is indeed an outlier with this practice of politically-appointed ambassadors, compared to other countries:

A 2017 study by researchers at the University of Texas at Austin said the United States was an “extreme outlier among foreign services in the number of political appointees as ambassadors, even in key posts.”

The researchers noted that in the other countries they studied (Brazil, Britain, China, France, Germany, India, Russia and Turkey), ambassadorial posts were almost entirely reserved for career diplomats.

And the newspaper also quotes some quid-pro-quo examples of appointments in exchange for donations:

Herbert Kalmbach, an attorney for President Richard M. Nixon, once testified under oath that he had spoken to a wealthy political donor about an ambassadorship. “Well, you know, I am interested in Europe, I think, and isn’t $250,000 an awful lot of money for Costa Rica?” Kalmbach recalled the donor, Ruth Farkas, complaining about one potential destination.

Farkas eventually donated $300,000 to Nixon’s reelection campaign. She was ambassador to Luxembourg from 1974 to 1976.

Despite the Foreign Service Act, political appointees, many of them big-dollar donors, have continued to be placed in embassies since 1980.

So yeah, there was an apparent attempt to mitigate the practice in the US by at least requiring some qualifications from ambassadors with that 1980 law, but apparently it was easily circumvented thereafter.

The fact that the Senate confirms ambassadors has not proven much of check in practice:

In theory, an ambassador requires Senate confirmation. This can weed out some picks. Though the Senate has not voted down a White House ambassadorial pick in decades, just appearing before the Senate can sometimes cause weak candidates to crumble: Hotel magnate George Tsunis withdrew from the nomination to become ambassador to Norway in 2014 after questioning revealed his lack of basic knowledge about Norway.

But, in general, the Senate does little to hold things up. The ever-ballooning cost of U.S. electoral campaigns, which surged to $6.5 billion in 2016, according to OpenSecrets, may add to the problem. Many wealthy presidential donors who harbor ambassadorial ambitions also donate to members of the Senate Foreign Relations Committee.

I'm not sure there are stats on the latter kind of donations (i.e. from would-be ambassadors to Senators).

The USA has a long history of doling out top Federal government jobs to political supporters, going back to Andrew Jackson (a very Trump-like figure, I might add). It is a common and accepted part of the system, which has been regularized by limiting it to the top jobs at embassies and government departments, and creating a non-partisan professional civil service corps underneath that level to perform the actual work. The political appointees are just there to be the department's interface to the POTUS, expressing the executive's leadership desires, and communicating the department/embassy's needs back up to his boss.

There is (very arguably, I realize) some benefit to the nation (and the host nation) in this practice.

The most useful ambassador for a country to have is a person who the President trusts, and who in a pinch can get the presidents' ear. Particularly when the POTUS in question might be otherwise reluctant to listen. In fact this is so important that it is common for foreign governments to judge where they fall on a new POTUS' international pecking order by how close to the POTUS their new ambassador is.

Under the current US election system, there is nobody who can command the time of a US politician as easily as their big donors and bundlers. We might prefer it if things weren't that way, but they are. So, if said person is willing to take their responsibilities seriously, landing one of them as head of your department or embassy would actually be the ideal for getting your concerns paid attention to.

Ambassadors are different from a lot of other appointments, in many cases they serve as a representative of the state rather than of the government; their role is largely ceremonial. In the US having a particular posting being a purely political appointment (rather than a professional from the USDOS), is actually pretty common, though Trump has cranked up the number compared to recent presidents.

Still a lot of depends on the posting, critical posts that actually require someone competent usually get someone who knows what they're doing, and a donor isn't usually going to want to get posted near a warzone. For example, ambassador Yovanovitch who was posted to Ukraine is a professional ambassador, while Sondland was the the ambassador to the EU. One posting is at war with Russia, the other isn't even a traditional state actor and I'm unsure how "the EU" would conduct a coherent foreign policy. (Note that Ukraine is not part of the EU, why Sondland was involved at all is outside the scope of your question).

It is unethical to appoint individuals to any role for their personal benefit in return for political or financial gain. This practice is usually called cronyism, graft, or other variations of corruption in public office. It is also illegal in most jurisdictions of the world, though it should be remembered that the people passing the laws that allow exceptions tend to be the same people who are using those exceptions for their own political or personal benefit.

Not the answer you're looking for? Browse other questions tagged united-states foreign-policy campaign-finance trump-impeachment ethics .

15
Do countries other than the US have politically appointed ambassadors?
0
Are there some patterns as to which Cabinet positions get filled with political appointees?

32
Why have US Presidents not been given the power of line item vetoes?
10
Have there been any studies that show that advertising for an election has an effect on who wins?
37
Why don't the Democrats make a deal to give Trump his border wall in exchange for campaign finance reform?
9
Have there been any personal attacks on Sondland after his change in testimony on the quid-pro-quo?
4
Have there been cases in New Zealand in which the consequences for unparliamentary speech have been more than a (forced) apology?
21
Why was ambassador Sondland involved in Ukraine?
14
What arguments have been made for not impeaching Trump?
13
Why does the Biden campaign have a $32 donation tier?
5
Why is there so much campaign-like activity after the polls have been closed?