Why does California spend so much on healthcare?

Taking a look at the California State budget, one can see that 46% of their taxpayers' money goes towards healthcare costs. But why is this the case? Isn't healthcare generally a federal concern, with programs such as Medicare and Medicaid?

Isn't healthcare generally a federal concern, with programs such as Medicare and Medicaid?

Partly, but under the ACA, California has set up is own health insurance market place in 2010. According to Wikipedia:

Covered California is the health insurance marketplace in the U.S. state of California established under the federal Patient Protection and Affordable Care Act (ACA). The exchange enables eligible individuals and small businesses to purchase private health insurance coverage at federally subsidized rates. It is administered by an independent agency of the government of California.

But even with that, many remain uninsured. According to the California Health Care Foundation (article dated 6 August 2018):

Since the implementation of the Affordable Care Act (ACA) in 2014, the uninsured rate in California dropped by nearly half, from 16% in 2013 to an all-time low of 9% in 2016. However, 2.9 million Californians remained uninsured.

So why so much?

The report describes the waste as follows, based on national estimates of waste (more on that here, the paper which they cite):

At least 18 percent of health care spending, and perhaps as much as 37 percent, is lost due to a combination of inefficient processes, excessive administrative overhead, unnecessary care (also called overuse), and excessive prices. Assuming the minimum level of waste at the national level applies to California’s health care system, that’s $20 billion of health care spending in the state’s budget that is wasted each year. These wasteful practices also affect costs for employers, private insurers, and Medicare.

Trade-off between spending on health and community conditions

To get an idea of this, the report introduces the community conditions as follows:

This shift in resources away from “social spending” is having dire and long-lasting consequences for the nation’s health and community well-being. A large and growing body of evidence shows that there are numerous factors besides medical treatment that affect our health. Some of these factors have been traditionally known as “socioeconomic determinants,” such as housing stability, financial security, and educational opportunity. Other factors include environmental quality, strong community ties, and adverse childhood experiences, or ACEs, such as trauma or neglect.

The trade-off between spending in these two areas exist from the idea that the total amount of money allocated in the budget remains roughly the same, but healthcare gets increasingly large piece of that pie. In turn, less is spent on community conditions, which in turn impacts community-well-being, thus leading to more healthcare problems so more money is needed for healthcare.

The report summarizes this as follows:

Moreover, the structure of health care funding in California makes it beneficial for policymakers not to acknowledge the tradeoffs that are occurring between health care spending and investing in the community conditions that have such a profound impact on health.

Practical illustration of that trade-off

As a practical example, you can look at homelessness, for example those living out of their car, instead of in a home, as some working people do in California (see for example this documentary by DW). They will face a lot of practical problems. They'll not be able to sleep as well, they'll have more difficulty maintaining good hygiene, etc. That can lead to extra problems that result in doctor's visits.

Instead of tackling the homelessness problem that causes these healthcare problems, it's easy to notice the increase in healthcare use and trying to solve that. If you don't have more money available, you'll have to take money away from other things. So this can lead to a vicious circle in which problems arise from less spending on community factors, which put pressure on the healthcare system resulting in new budgets reallocating money from community policy areas to healthcare.

To show how this happened in the case of homelessness, consider the graph below from the LA Times: 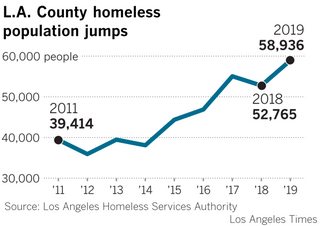 Not the answer you're looking for? Browse other questions tagged healthcare budget california .

11
What prevents the U.S Congress from adopting a capital budget?
0
Why was the Healthcare.gov site development managed so badly?
3
Why did the Supreme Court consider the Obamacare Medicaid expansion coercion?
24
Why fund research in pure mathematics?
1
How could California finance a single-payer healthcare scheme with only a payroll tax
12
If medication prices in the US are higher than in other countries, why not import from there?
4
Is the use of "fear" effective in terms of voter turn out in US elections.....?
19
Long term, does Trump's wall cost more than it saves per year?
15
COVID-19 in US healthcare: who pays for testing?
21
Do any nations have in place formal mechanisms to "save in good years/spend in bad years"?