How true are Trump’s claims about NATO spending?

Over President Trump’s term in office, he has been very vocal about the spending commitments made by many NATO countries, and their frequent failure to live up to them. He now seems to be taking credit for reversing this trend. In particular, I’m talking about the claims made in the tweet below.

How true are Trump’s claims that the US is unfairly paying for Europe’s defense, and are his claims that his presidency has been responsible for persuading other member states to meet their spending commitments valid? 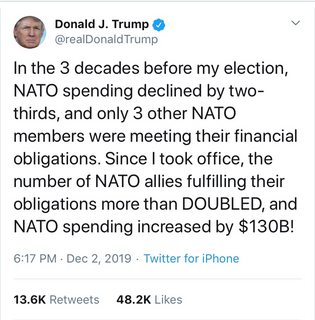 Text of tweet: In the 3 decades before my election, NATO spending declined by two-thirds, and only 3 other NATO members were meeting their financial obligations. Since I took office, the number of NATO allies fulfilling their obligations more than DOUBLED, and NATO spending increased by $130B!

On page 4 of this 1987 report(pdf) on NATO military spending, we learn that in 1987 they were globally spending 5.0% of their GDP on defense. More precisely:

The military spending has thus decreased by a half, and not by two-thirds, in share of GDP.

In nominal terms, of course, it had not decreased at all, since GDP more than doubled from 1987 to 2016.

Please note that these comparisons are not on a consistent number of countries, since NATO expanded to new countries after the end of the Cold War. I suspect than Warsaw Pact countries, e.g. Poland, were spending a huge share of their GDP on defense, but it would be complicated, and certainly meaningless, to refine the figures to include them.

Second claim: true
[Before Trump came to office] only 3 other NATO countries were meeting their financial obligations.

At the 2014 summit in Wales, all of the NATO members agreed to spend 2 percent of their GDP on the defense by the year 2025.

According to table 3, Back in 2016, only 3 NATO countries beside the USA were fulfilling this 2% commitment: Greece, UK, Estonia were at least at 2.07%, and Poland stood just under the threshold with 1.99%.

So, 3 out of 27 non-US NATO countries, the claim is correct.

Bulgaria announced a spectacular increase in military spending, it was standing at 1.48% in 2018. This is due to a huge one-time command in 2019 (cf notes below), so it is hard to imagine how much they will spend on defense in 2020.

If we include Bulgaria and the USA, the number of countries above 2.0% of military spending passed from 4 to 9, so this is indeed more than doubling.

However, this is maybe not as significant as the capital letters might make the readers of Trump's tweeter account think: for instance, Poland's military spending has increased from 1.99% to 2.00% of GDP. The figures are more impressive for Romania's (from 1.40% to 2.04%) Latvia's (from 1.45% to 2.01%), and of course Bulgaria.

Fourth claim: rather false
NATO spending increased by $130B

Using current prices and exchange rates, however, the increase is +$128B, from $911B in 2016 to $1039B in 2019. This might be the figure Trump refers to, but it is misleading. The extra $54B are due to inflation and to the exchange rate of US dollar($) versus other NATO countries currencies, mainly Euro(€).

In any case, about half of the raise is due to the US own growing military budget. Canada and Europe NATO countries have raised their military spending by $40B in this 3 years period. (Which I would describe as significant, but also significantly lower than the figure given by Trump's tweet).

If we were Since we are on Politics.SE and not Skeptics.SE, we might discuss how much of this raise is due to Trump's diplomatic effort, and how much was already planned (the 2% commitment was taken in 2014, countries needed time to converge there), or a reaction by East-European countries to the perceived threat of Russia after the Ukraine crisis, or a consequence of NATO members putting less trust in their American ally for their own protection.

The previous answer gave plenty of numbers, so let me focus on

How true are Trump’s claims that the US is unfairly paying for Europe’s defense [...] ?

Once upon a time, the US and their Western European allies were menaced by the Soviet Union and their Eastern European allies. The Group of Soviet Forces in Germany stood ready to roll through the Fulda Gap and might have reached the Rhine in seven days. They were deterred by the combined forces of the US and the other NATO members and especially the US nuclear umbrella.

After the end of the Cold War, NATO greatly reduced their forces and budgets, especially the European members. The US reduced their forward deployment of combat forces to Germany and transformed most of the remainder into a logistics hub. Ramstein has become a drone operations center for the global War on Terror, Landstuhl receives casualties from those interventions.

Then the Russian threat became much more credible again. Especially the Baltic EU/NATO members and Poland felt threatened. NATO conventional forces were drawn down to a point where they are no credible deterrent. The Enhanced Forward Presence comes to perhaps one armored brigade, and that is counting the US and Canadian contributions.

The last bullet point is clearly the weakest of the six. The military budgets of France, Germany, and the UK are each individually in the same range as the Russian budget, so why are they not getting the expected results? Higher salaries are part of the explanation, but they are not enough. Duplication of effort is another. To get a credible defense, the EU-and-NATO countries would have to coordinate much better.

Regarding fairness, would the US really want an EU that spends 2% of GDP on defense and gets value for money?

I wanted to just add a comment, however I do not have the reputation needed, so I am just gonna write an answer. Have in mind I am not going to provide solid facts, however my claims can still will be confirmed one way or another, and I am expressing the notion that not only I, as an European have, but many of my friends and people living around me share. I have also lived in different EU countries over the past 10 years:

it is true that NATO has increased military spending during Trump. It was actually on a decline during Obama, and countries were still refusing to increase it when confronted directly, which the US took as an offense.

Absolutely NO. Europe is not threatened by Russia. Russia does not have the reason, nor funds, nor will power, nor manpower to invade any country in Europe. It will be detrimental for Russia to attack. Russia is still recovering from the fall of the Soviet Union a few decades later. It makes no sense in halting this slow, but sure economic recovery by dragging itself into a war and cutting it short. Also: have in mind that despite being the biggest country, Russia only has about 120 million people, so manpower for an offensive war will be an issue.

Why does the US insist on increaded European military spending?

Well, that's simple. Increased spending means buying more machinery. And considering the US is the world's top producer of all sorts of military hardware AND software, this increase in European military spending will directly increase the money flow into the US.

Where does the threat come from?

As I said politicians and their agendas and opinions are very different than the normal person and their opinions and feelings. What we constantly see is politics and "the few at the top" trying to unsuccessfully influencing their nations. The problem here is that I, living in my home country can see the "propaganda" they are trying to bathe us with, however when my politician's words go abroad, people in other countries are unable to fact-check so easily and take the truthfulness behind those words for granted. I believe at this point everyone has understood that any sort of war is not going to benefit ANYONE.

Not the answer you're looking for? Browse other questions tagged united-states donald-trump international-relations military nato .

5
What is the defense spending obligation for NATO countries this year?

4
How much additional defense spending would NATO have if every member met its obligations?
18
If Turkey enters a war, are other NATO members obligated to assist it?
15
Are NATO countries obliged to meet their 2% defence spending targets?
8
Why was the 2% threshold specifically chosen as the target for NATO spending?
8
Why would Russia care about NATO troops on its borders if it has nuclear weapons?
2
Are U.S. territorial claims in the Pacific compliant with UNCLOS?
4
Is there a fund into which NATO countries are supposed to pay?
5
What is the defense spending obligation for NATO countries this year?
11
Doesn't NATO have something to say about conflicts with non-NATO allies?