Does Boris Johnson’s new negotiated withdrawal agreement mandate customs checks between Northern Ireland and the rest of the UK?

The new Withdrawal Agreement negotiated under Boris Johnson’s leadership has constantly come under scrutiny about whether or not the agreement when implemented would necessitate customs checks between Northern Ireland and the rest of the UK.

For his part, Mr. Johnson has repeatedly claimed that “there will not be checks”, while the EU has said that the deal “means customs forms for exports from NI to GB”. Today, Labour released a leaked government document which they say is “hard evidence that Boris Johnson is misleading people about his deal”.

What is the truth here? What checks, if any, need to exist between NI and GB and vice versa, under the new withdrawal agreement? Is there anything new in the documents released by Labour that wasn’t already set out in the text of the deal?

Yes, there will be some forms and checks according to the Withdrawal Agreement with the Revised Protocol on Ireland and Northern Ireland, statements made by the Brexit Secretary Stephen Barclay and other Ministers (albeit trying to minimise it), official statements from the Department for Exiting the European Union in response to press queries (summary), as well as statements made by Prime Minister Boris Johnson himself in past interviews (despite what he has said on other occasions including in the press conference on 6 December 2019) - and now this leaked Treasury analysis.

Unfortunately we cannot yet know the extent of the forms and checks etc because that is to be hammered out over time.

This difference between the Government's stated position and the legal reality is what led to the Democratic Unionist Party's upset in October 2019 (Parliament debate, BBC article) with the Conservative Government, with which they had a confidence and supply arrangement since 2017. Despite the Government's promise and repeated denials, the DUP understood from the actual Withdrawal Agreement that there would have to be some checks.

According to the Treasury impact analysis leak, the authenticity of which is not disputed (although there is some FUD about its depth of analysis and its disavowal by Johnson as "complete nonsense" although he also said he hadn't seen it):

The new NI Protocol maintains the UK's commitment to protecting the UK internal market by ensuring that NI goods have "unfettered access to GB. However, this is constrained by the international obligations applying to NI by application of EU law.

You can see it warns of the distinction between (A) the promise or aspiration and (B) the constraints resulting from legal obligations. Johnson said yesterday, ignore that material and listen to his promises - businesses can't rely on doing that.

At minimum, this means that exit summary declarations will be required when goods are exported from NI to GB, in order to meet the EU's obligations under the SAFE framework. 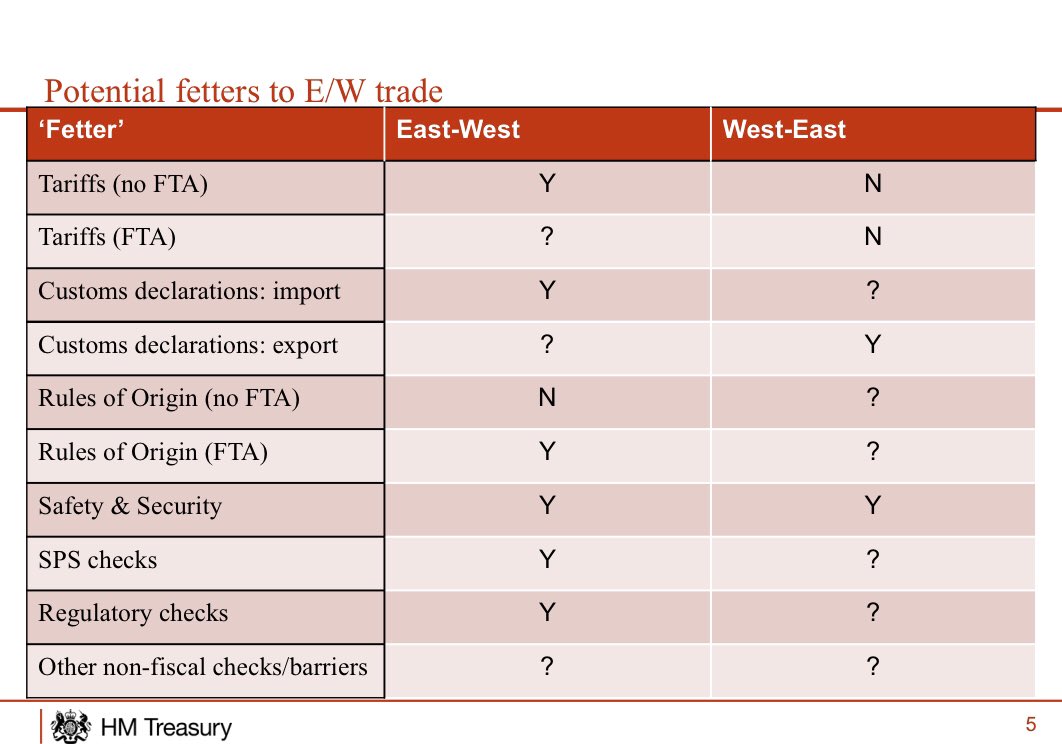 And some customs experts, e.g. Dr Anna Jerzewska, have said the customs reality is that "A number of the ? should be changed to Y".

Of course the impacts and risks differ depending on the circumstances: 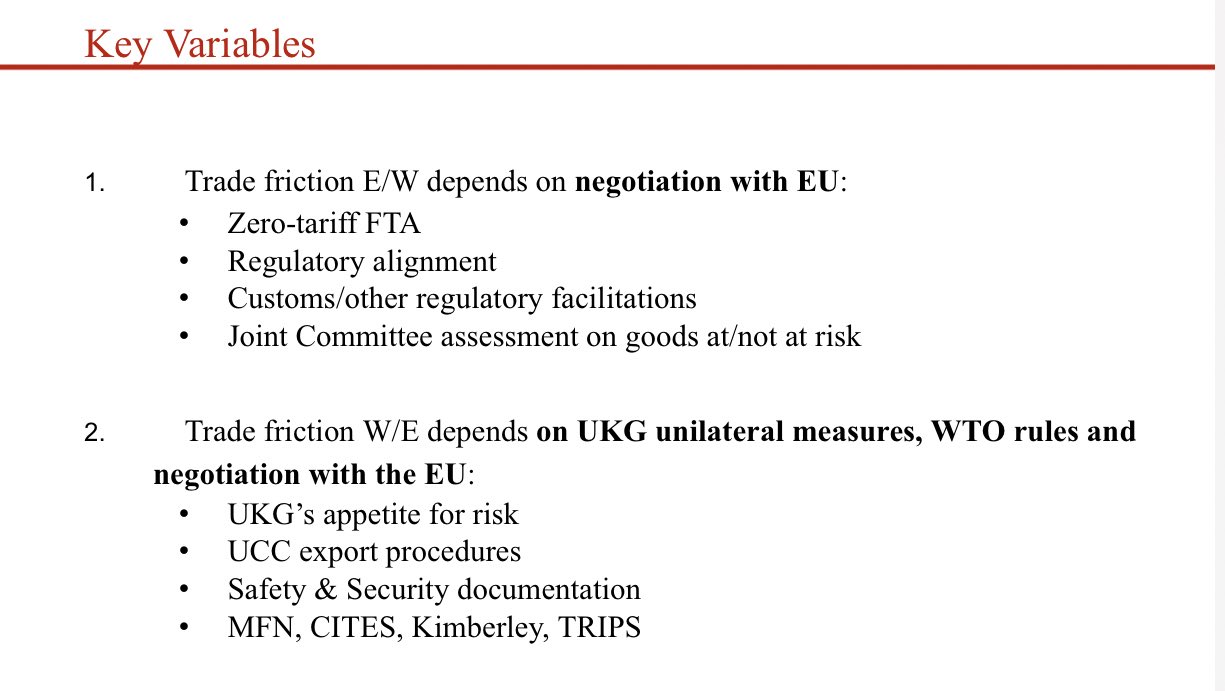 I think it's true that, in terms of content, those parts of the leak are not new because the information is in the Withdrawal Agreement, whether explicitly stated or reasonably inferred - but the simple tables concisely represent lots of legalese and save time reading thousands of words and thinking about their implications. It just hasn't been such a big story in the mainstream media before now.

A new part, so far as I'm aware, is the Treasury's estimated impact: 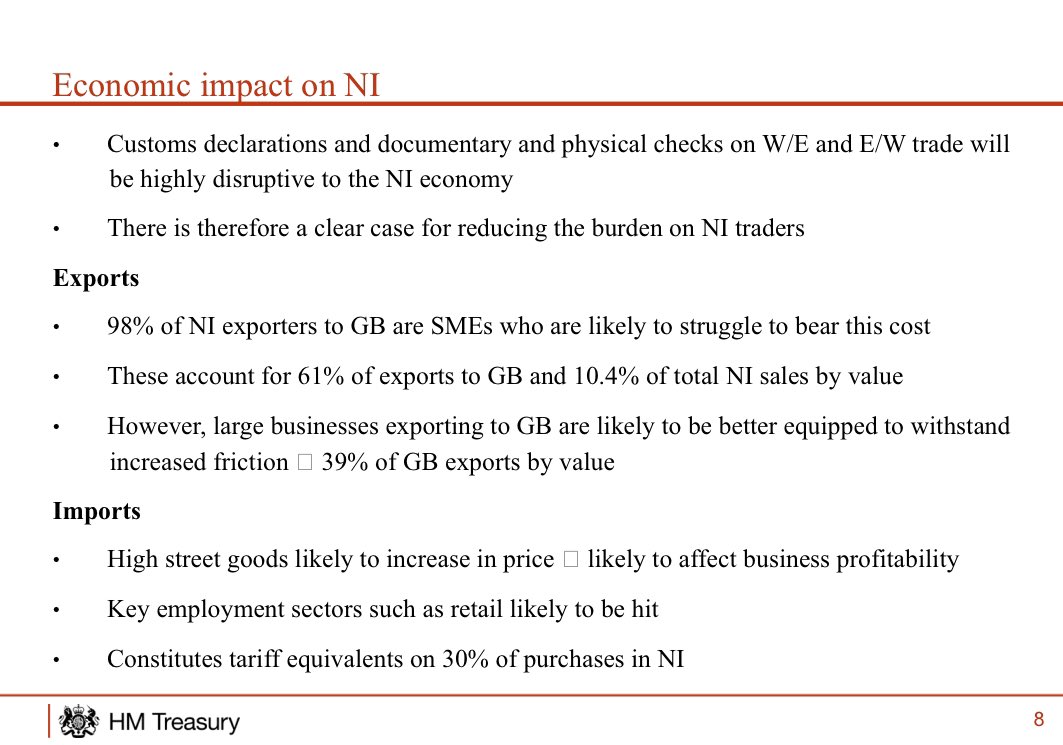 That says the customs declarations, documentary checks and physical checks on trade will be equivalent to a 30% tariff on purchases in Northern Ireland of imported goods, which is extraordinary. The declarations and checks will be "highly disruptive" to the economy of Northern Ireland and there is talk about grants of money to mitigate such costs.

So far as I can tell, the only possibilities consistent with "no checks" are that (1) the Government does not intend to enforce international agreements re checks and/or (2) they hope/believe in a 'unicorn' arrangement, i.e. the Joint UK/EU Committee will agree to completely free trade while allowing the UK freedom to diverge from 'alignment' with the EU.

So the content isn't 'news', the leak is news because it is a leak and because of statements made by Johnson that contradict the content.

A wider point is that, in contemporary politics, facts matter so little and blatant falsehoods can be repeated with little or no cost.

Not the answer you're looking for? Browse other questions tagged united-kingdom european-union brexit trade northern-ireland .

15
What is the evidence that customs checks in Northern Ireland are going to result in violence?
15
Why is Boris Johnson visiting only Paris & Berlin if every member of the EU needs to agree on a withdrawal deal?
20
Brexit and backstop: would changes require unanimous approval by all EU countries? Does Ireland hold a veto?
38
Why is the UK so keen to remove the "backstop" when their leadership seems to think that no border will be needed in Northern Ireland?
8
How can the British government both obey the Benn Act and still leave without a Brexit deal?
5
Why did the EU agree with a Stormont vote when the Assembly might not even meet?
3
The Belfast/Good Friday Agreement and the revised Ireland/Northern Ireland Protocol
9
Is the dossier released by Labour proof that the NHS is for sale?
13
How does the recent EU-UK trade treaty "go beyond a Canada-style" agreement, but still not require ratification by national parliaments under EU law?