Why are Amex fees allowed in the European Union?

As I was reading this answer on Travel SE, and more specifically this part:

In one hotel in London I had to pay 3% extra for using Amex instead of Visa/MC.

I started reading some more about this regulation, as it was my thinking that within the EU traders can't charge extra for Credit Card payments. They can refuse them all-together though.

Now, my search brought up the following page on pricing and payments in the EU. Especially this part (Emphasis mine):

Traders in the EU are not allowed to charge you extra for using your credit or debit card. The only exceptions to this rule are American Express/Diners Club cards and business or corporate credit cards, where your employer is billed instead of you.

I am however unable to find as to why the EU allows the AMEX/Diners Club exception. Can someone elaborate on that?

These are considered cards issued by three party schemes, from europa.eu:

Credit and debit cards issued by three party schemes (such as American Express and Diners Club), and business or corporate credit cards, where your employer is billed instead of you, are not covered by EU rules on payment services, and you can still be charged extra for using these cards.

So these cards, the ones you name are also named as an example by the EU's information page, are not covered by the rule against surcharging.

The European Court of Justice has a bit more on this in its press release entitled A three party card scheme involving a co-branding partner or an agent is subject to the same restrictions as those applicable to four party schemes with respect to interchange fees.

An ‘interchange fee’ is a fee paid directly or indirectly (i.e. through a third party) for each transaction between the issuer and the acquirer involved in a card-based payment transaction. An EU regulation restricts the amount of interchange fees.

Then there is a lot of technical talk which I'll skip, but I'll add their conclusion:

The co-branding arrangements talked about in their conclusion are perhaps better explained on Wikipedia (emphasis mine):

Examples of this setup are Diners Club, Discover Card, and American Express, although in recent times these schemes have also partnered with other issuers and acquirers in order to boost their circulation and acceptance, and Diners Club now operates as a four-party scheme in many regions.

In a four-party scheme, the issuer and acquirer are different entities, and this type of scheme is open for other institutions to join and issue their own cards. This is the type of card scheme used by brands such as Visa, Mastercard, Verve Card, UnionPay and RuPay. There are no limitations as to who may join the scheme, as long as the requirements of the scheme are met.

The explanation is somewhat simple. Regulation (EU) 2015/751 of 29 April 2015, which capped the interchange fees for four-party schemes like Visa and Mastercard, was according to a World Bank presentation, specifically designed to

Introduce more competition on the acquiring side

Why three-party schemes (like Amex) were excluded is a bit harder to fathom. I suspect some lobbying was at play. There was another (temporary) exception allowed:

Three party schemes with licensees: Member States can exempt for till 09.12.2018 if whole scheme has <3% market share

Another presentation has this interesting slide, which shows that in the run-up to the Regulation, Visa and Mastercard (but not Amex) were sued in the EU (UK at least) by retailers for the fees. So I guess the EU took the minimal measures with the 2015 regulation to avoid the exact same lawsuits, but not similar ones (which predictably enough followed). 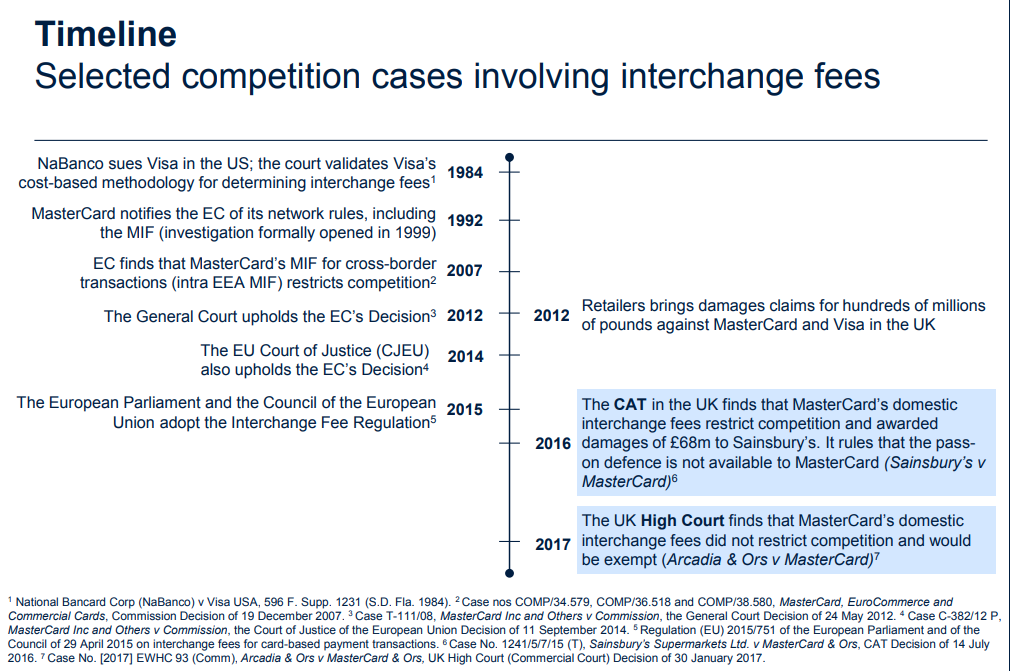 A bit more searching found a US-EU comparative paper on card regulations that states that Amex (with rewards) is mostly used by rich people... so I guess that the EU didn't see a need to help them (with the fees). Also, and perhaps more importantly, it seems that the EU considers that steering the consumer to cards with lower fees is feasible and even desirable in the case of three-party schemes, unlike in the case of four-party schemes in which the Visa/Mastercard as a sort of intermediary monopoly. (Frankly, this is seem to work in some EU theory, in which there could be many three-party scheme, even though in practice there probably aren't anymore than four-party schemes, i.e. the three-party market is just as oligopolic.)

The inspiration for that rule in the PSD1 Directive also came from competition policy thinking: "[i]n order to promote transparency and competition", "[t]he payment service provider shall not prevent the [store] from requesting from the payer a charge or from offering him a reduction for the use of a given payment instrument".

Two conclusions can be drawn from this. First, prohibiting corporate behaviour by regulation is arguably even more severe than characterising it as a "restriction by object" under Article 101. A restriction by object may be exempted through the efficiency defence under Article 101(3), while EU regulation of anti-steering provisions does not allow for exemptions. Second, in the eyes of the European Commission and EU legislator, allowing "steering" exposes "more expensive means of payment" to more competition, while anti-steering policies cause all consumers to subsidise the wealthier users of high-cost cards. This rationale for prohibiting anti-steering clauses in the EU would apply equally to the Amex case.

Since Amex cards function on the basis of high rewards but also high fees to cardholders, Amex cardholders tend to be wealthier than other cardholders. Amex cards also charge higher fees to stores than Visa and Mastercard. Stores internalise those fees on Amex transactions as costs ultimately borne by all customers. Therefore Amex cardholder rewards are subsidised by all customers. In technical terms, one could call this a negative externality. In simple terms, one would call this a mechanism of economic inequality – a "reverse Robin Hood payment system".

The same idea, more concisely stated in an industry paper (from the merchants' perspective):

There are a number of exemptions from the caps:

The rationale here is that these exemptions, coupled with the steering provisions in Article 11 and the near removal of the honour all cards rule, will enable merchants to steer consumers to the most efficient payment type.

Interestingly, an industry article notes that Amex found itself at a severe disadvantage following the new rules, and has subsequently largely exited the EU market in 2019, with a few [sectoral] exceptions. This was actually fairly predictable following their loss of a 2018 lawsuit,

The popular British Airways American Express (Amex) credit card is among those which could disappear from the UK market after the European Court of Justice (ECJ) this week issued a ruling against the card provider. [...]

But this week’s European-wide ruling has judged that in cases when a card is co-branded, such as with an airline, this counts as a fourth party and thus fees charged to retailers must be capped.

And as a result:

Over the course of 2019, American Express credit cards issued under independent operator agreements will be rendered invalid in all countries of the European Union. Various banks that have up to now had exclusive licensing contracts with American Express have already responded accordingly and provided their clients with the opportunity to switch to other card brands.

The card company is still open to dealing directly with interested individuals and has also opted to maintain a physical presence in several European Union countries, operating its proprietary businesses or joint ventures, including France, one of its most lucrative markets. [...]

So it looks like the three-party exception (to the fee cap) is something that Amex actually likes, as they chose to withdraw from any card business where the four-party rules were judged to apply (but insofar not from the three-party ones).

Also interestingly, Mastercard argued that the same rules should apply to three-party schemes (but they didn't get that from the EU insofar):

What's also interesting from another Mastercard 2014 lobbying document, is that EU apparently considered regulating the three-party schemes likewise at some point, but that apparently changed during the regulation process:

We would support amendments to the proposed Regulation that: Maintain the European Commission’s original proposal to consider three party schemes using payment service providers as issuers or acquirers as four party payment schemes and follow the same rules

Not the answer you're looking for? Browse other questions tagged european-union regulation banking .