Was the President obligated to notify Congress of a hold on funds to Ukraine? [closed]

Ask Question
Asked 9 months ago
Active 9 months ago
Viewed 156 times
2
Closed. This question needs details or clarity. It is not currently accepting answers.

During Testimony before the House Committee, Mark Sandy, Office of Management and Budget, said concerns about the hold on military aid caused at least two officials within the Office of Management and Budget to resign. At least one of officials expressed the possible "hold" as improper as the Impoundment Act requires the President to notify Congress of his intent to impound funds that had been otherwise authorized by Congress.

If the President is obligated to notify, could the director of OMB unilaterally hold up funds that have been authorized by Congress, thereby relieving the President of providing Presidential notification?

I think I understand the confusion of the person asking the question. The so-called impoundment act, with the full name of Congressional Budget and Impoundment Control Act of 1974 was intended to prevent the president from withholding funds from programs he does not support even though Congress has approved funds for that program. For example, funds that are set for the EPA must be released to the EPA to be committed. The point that needs to be retained from this point is that those funds are available to be committed but do not need to be committed. Just like if your dad gives you $10 to buy movie tickets and you spend $8, you are not required to shred the remaining $2 or face prosecution.

The problem with this rule is 2-fold.

There is enormous examples of presidents withholding or over extending the budget line for foreign aid since this rule was enacted.

If you just take the year by year summary of appropriation vs disbursement (source explorer.usaid.gov) you can see that spending is often less than appropriations and sometimes higher (2015, 2016). 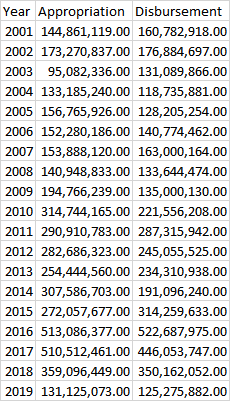 Now the devil is in the details, never has there been a year without appropriations but what was the money spent on. During the Obama administration, there was a question of lethal aid or not, Trump did not get around to making a change until late 2017 and begin sending lethal aid, but the dollars did make it to Ukraine every year in one way or the other.

This whole discussion is entirely academic since there is still no proof that any aid had been withheld for any extensive period. Certainly not for a year, the numbers do not lie.

The question of aid is so convoluted that it does not make sense to question whether a president can or cannot withhold aid as in all aid. The president can play with some disbursement but in a practical sense, no one agency can stop everything at once since there are so many disbursement from so many agencies. For example just Ukraine in 2019 has as many as 303 sources of disbursements (Source: explorer.usaid.gov): 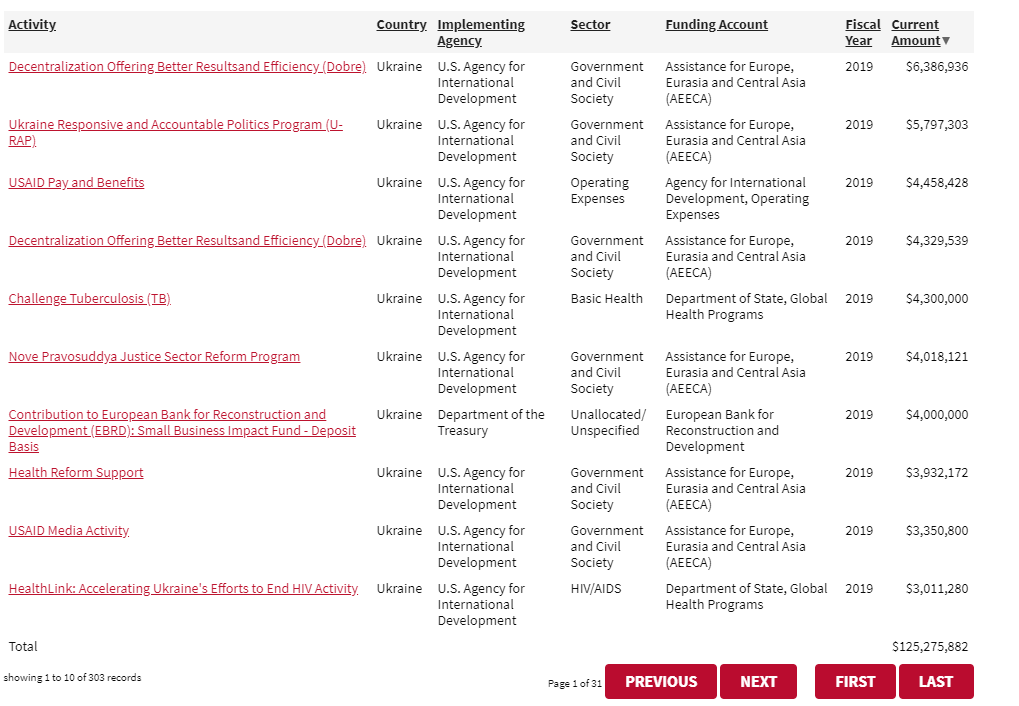 Not the answer you're looking for? Browse other questions tagged united-states impeachment trump-impeachment .

2
If the Capitol weren't available, where would Congress hold votes?
6
Can the US Congress allocate funds conditionally?
15
Was the whistleblower in the Ukraine scandal legally required to make his report?
3
What would happen if the President in America was convicted by the Senate after being renominated?
22
Did Obama notify Congress (the Intelligence committees in particular) that the bin Laden raid was ongoing?
19
Was the whistle-blower's (12 Aug 2019) complaint deemed credible?
21
Why was ambassador Sondland involved in Ukraine?
38
Can the U.S. Senate hold an impeachment trial if the House “passes” articles of impeachment but does not “transmit” them to the Senate?