I understand the first past the post system in that the candidate with the most votes in a constituency is elected as the MP for their particular party, but what I don't understand why the SNP can get 40 odd seats with around 3% votes yet the Greens get 1 seat for 1.7% of the vote?

This is not proportional and I don't understand the constituency bias? Can someone explain this please?

First past the post is not meant to be proportional. You didn’t say which particular election you were talking about, but taking the 2017 election as an example, the SNP fielded candidates in all 59 seats in Scotland, winning in 35 of them, and achieving 37% of the votes cast in the seats which they contested.

This is a comparable percentage-vote to seat ratio as the overall UK winners of that election, the Conservatives, with 42% of the UK vote share for just under half of the seats they contested.

The answer to your specific question, then, is that the SNP’s votes are far more concentrated in a small number of seats, while the Greens votes are spread around most of the UK. This can be seen as either a weakness or a strength of FPTP - but that’s not the question today.

For an example of a real tragedy of FPTP - and possibly a better example of the phenomenon you’re describing - we need only look back to the 2015 election, where UKIP achieved 12.6% of the UK wide vote-share, but only won 1 seat in Parliament. The feeling of disenfranchisement and unfairness caused by that result could well have been a significant factor in the events that would follow in the Brexit saga.

The first past the post voting system favours large nationwide parties (in the UK the large nationwide parties in terms of members, funding and presence in the field are the Conservatives and Labour, to a lesser extent the LibDems) and small parties with strong support in clearly defined regions. The latter group contains almost all of the small or small-ish parties that hold seats in Westminster:

Lady Hermon, a Northern Irish indepent is somewhat of a special case: she was initially elected for the Ulster Unionist Party in 2001 but sat and stood as an independent candidate since 2010. She was obviously sufficiently popular in her constituency to continue getting elected even without party support, although the UUP would be another of the local Northern Irish parties. She is not standing for reelection in the 2019 election.

The Greens don’t have a clearly defined local stronghold base. If anything, Brighton Pavillion, the constituency of Caroline Lucas might be considered one as she won an absolute majority there in 2017 when she was still co-leader of the party. But if you take a look at the map of strongest third party by constituency below (taken from Wikipedia, where a full list of authors is available), you see that the strongest third party was LibDems or UKIP pretty much all across England. 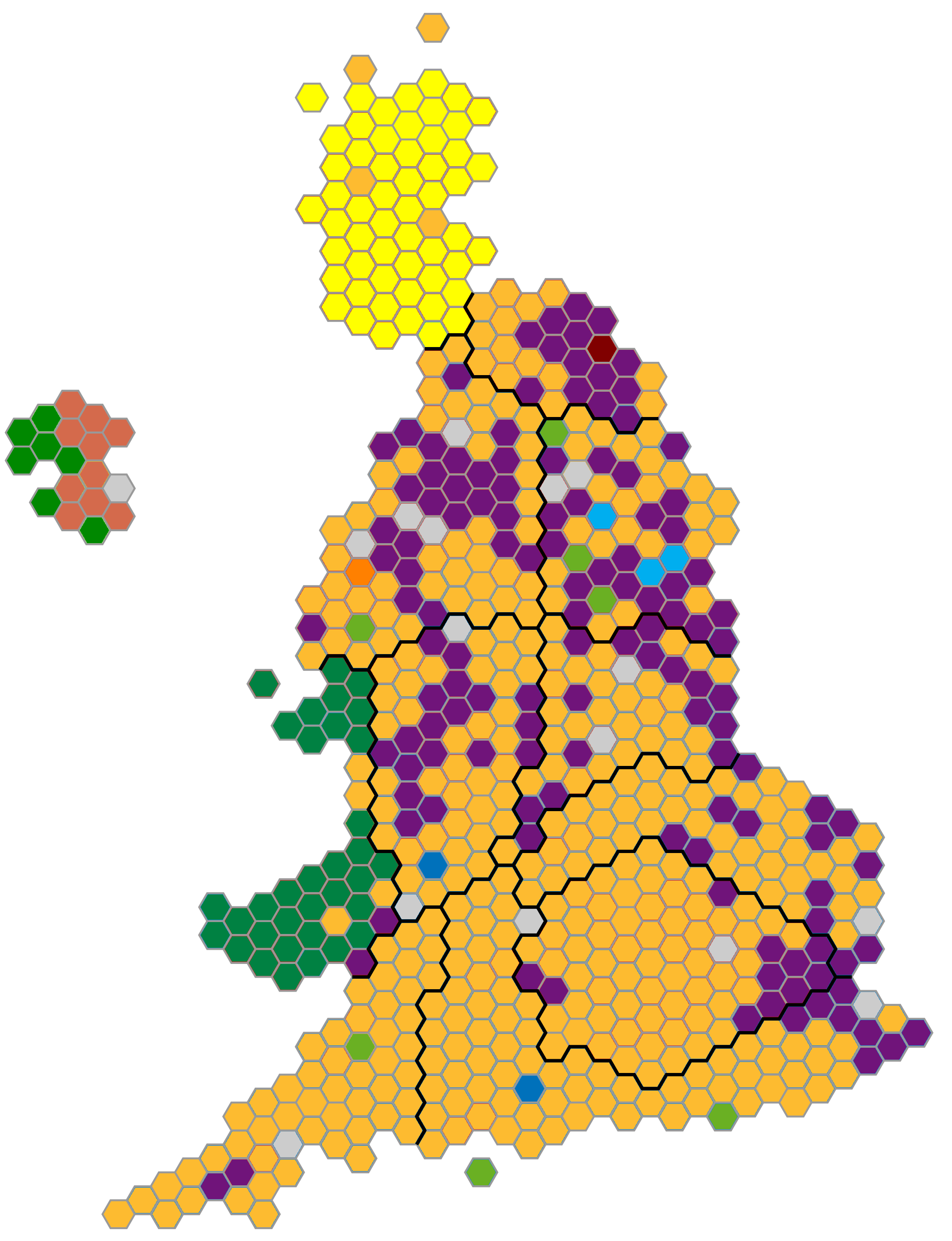 The map clearly shows how the SNP outscores everything that is not Labour or Conservative across most of Scotland while Plaid Cymru does the same in Wales. However, in Wales there was still much more support for the two main parties leading to Plaid Cymru only gaining 4 seats. The greens pop up in a number of unconnected constituencies as do some exceedingly minor parties in other places (whose names and colours I had to look up). While the UKIP was, at the time of the 2017 election, gaining traction all over England, they never managed to take over a seat from one of the two larger parties (one may argue how much of an opponent the LibDems were after their humiliating defeat in the 2015 election).

Thus, the non-proportional FPTP system favours a party such as the SNP but disfavours one like the Greens or the UKIP.

The core answer to the actual question is built-in to the design of the UK's electoral system. It deliberately ignores any consideration of proportionality at the aggregate level (or, perhaps, the complaints of unfairness have never gained enough support for a major party to try changing the ancient system except for the coalition government who proposed a more proportional system and decisively lost a public referendum on the topic). The biggest argument for holding with the current system is that it magnifies swings in the vote and makes getting a government with a decisive majority more likely.

But the mechanics of First Past the Post (FPTP) are clear. The only vote that matters is in the individual seat. A candidate is elected to be an MP if they get more votes than any other candidate in that seat.

So concentration of vote matters a lot. Popular candidates can beat big parties if they can get a strong local vote (this is why the greens get a seat). Parties who spread their vote efficiently (so not building up very large majorities in the seats they win) can win a bigger proportion of seats than their national vote would suggest (this is a current problem for Labour as they have a number of seats in deprived cities where they wastefully get >70%).

So imagine a centre party with evenly spread support across the country of 34% can get no seats at all: in left-leaning seats where the Labour party gets at least 35% will win that seat; in right-leaning seats the Conservative party can win with 35% of the vote. If we assume that the Conservatives and Labour get few votes in the "enemy" seats this could give a parliament where a government gets a majority with ~17% of the national vote (assuming nobody in Labour-leaning seats ever votes Conservative and other parties take up the slack). This is an unrealistic extreme example, but highlights the point.

In reality there are local parties who have few national votes but whose vote is very concentrated. This is what happens in scotland where the SNP won >80% of scottish seats with ~45% of the scottish vote (helped because the opposition is split 4-ways in scotland).

In short: this is how the system is meant to work: there are arguments for changing it but there are also arguments that it has advantages. And it won't change unless a party wins a majority under the current system and decides to change it.

Not the answer you're looking for? Browse other questions tagged united-kingdom election parliament house-of-commons member-of-parliament .

39
What are the disadvantages of first-past-the-post electoral systems?

16
Why is proportional representation not considered in any of the US states?
11
In an MMP system, why don't parties game the system by splitting into two parties?
4
If opposition parties collude at election time to prevent splitting votes, does the public object?
13
In first-past-the-post/winner-takes-all elections, is turnout higher in marginal seats / swing states?
9
Rules for New Hampshire's 1845 Congressional election
10
In Bundestag election, can a party abuse the system by endorsing independents in constituency (first vote) races?
10
What is the point of Germany's 299 “party seats” in the Bundestag?
5
What happens if an independent candidate in the UK gets two seats worth of votes in EU elections?
5
How does Alba's “list only” strategy work in Scottish Elections?