YouGov's multilevel regression and post-stratification (MRP) model is seen as one of the most reliable pre-election predictors of what results will look like in the UK. Their turnout predictions by age are as follows: 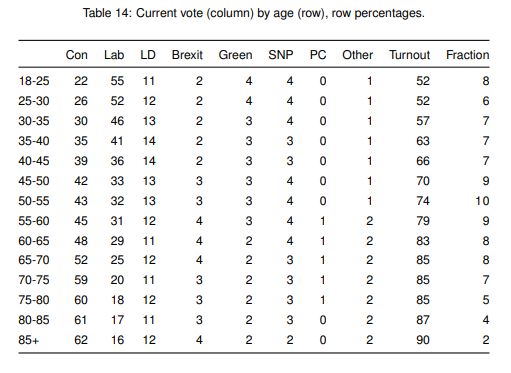 It seems to me like these turnout figures exaggerate the differences that exist between age groups. Let's compare them to the historical figures from the parliament website: 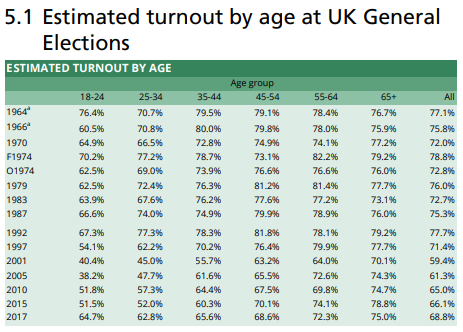 It is also worth noting that in past elections, the polls have underestimated Conservative voting strength, and have (as Nate Silver says) engaged in "pretty dodgy" methods to boost the headline figure for the Conservatives up to where they often seem to be at the election (Nate suggests these resulted in the polls missing the 2017 hung Parliament). Nate Silver's analysis may be found here.

TLDR: they estimate turnout rates using data from the British Election Study, which in some cases has validated vote records.

The answer to your question is yes, at least for the 2017 election. From their article in the International Journal of Forecasting:

For each application, we estimated the conditional probability of turnout p(T_i = 1|X_i) as a function of covariates using a face-to-face probability survey conducted after one or more prior election(s). ... For the UK general election model, we pooled the 2010 and 2015 BES post-election surveys, after verifying that the demographics of turnout in the two surveys were largely similar. ... For all three applications, the turnout model took the form of a multilevel binary logistic regression model. ... for the UK general election model, BES weights were used via a quasilikelihood approach. The variables used in each model (including interactions) are listed in Table A.2 in the Appendix.

They go on to describe their procedure in more detail. So, basically, they estimate turnout by age group (and other demographics) from the British Election Study. Note that recent waves of the BES have validated turnout variables, which are presumably better measures than mere self-reported turnout. This FAQ on the 2019 forecast says they still use recent waves of the BES:

Turnout is assessed on voters’ demographics and is also based on analysis from 2015 and 2017 British Election Study data.

Not the answer you're looking for? Browse other questions tagged united-kingdom statistics voter-turnout polling .

9
Are partisans more likely to vote if they believe there will be higher turnout among the opposing party?
5
Are turnout figures available at the German consulate level for the 2017 Turkish Referendum?
1
What are the reasons for not having a voter turnout threshold for a nation-wide referendum?
10
Evidence in support of highly myopic retrospective voting
6
Did only retired people vote in a majority for the Conservatives in the UK 2017 General Election?
36
What is the purpose of polls published by the organization that they are asking about which have leading/confusing questions?
1
Has the UK had an election, referendum, or similar result either not implemented or put again before being implemented (in modern times)?
5
Has the membership of SAGE during the COVID-19 pandemic been published?
3
What, if anything, has been done to account for mail-in votes in 2020 exit poll data?