Why did a decent number of London constituencies vote to Leave?

London has been seen as a Remain stronghold. However, I see that there are a decent number of London constituencies which voted to leave (eg: Carshalton and Wallington, Croydon Central, Uxbridge and South Ruislip, Orpington, Romford, Ilford North, Dagenham and Rainham (where 69.9% of voters chose to Leave!)).

These constituencies are far from the centre of town, so is it possible that culturally and economically, they are more similar to Essex/Surrey/other Home Counties as opposed to London as we understand it? Or are there other reasons at play?

I'm not going to rule out local effects, but a lot of the differences you note can be explained by ordinary demographics.

Now if we look at mappings of the census data for the 2011 census for age, ethnic identity and social group in London we see that the constituencies you've named have a greater than average number of old, white non-professionals than other areas of London.

More generally, "London" is really just being used as a short hand for an urban mixture of young professionals and BAME (Black, Asian and Mixed Ethnicity) communities, the same kind of voting pattern was seen in several smaller University towns around England and Wales.

It appears to be the same belt (or "doughnut") effect discussed more generally with respect to other elections in (Greater) London. Basically Greater London is more than the [core] city, which itself is quite Labour and Remain oriented.

Here's the EU referendum results on a London map: 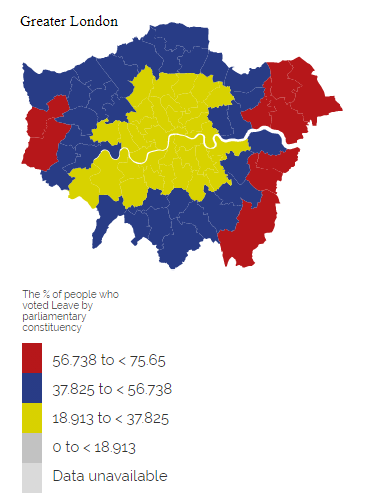 Image from polimapper; alas their [color] scale is a bit coarse.

A better map in terms of color scale, but alas with lower geographical resolution: 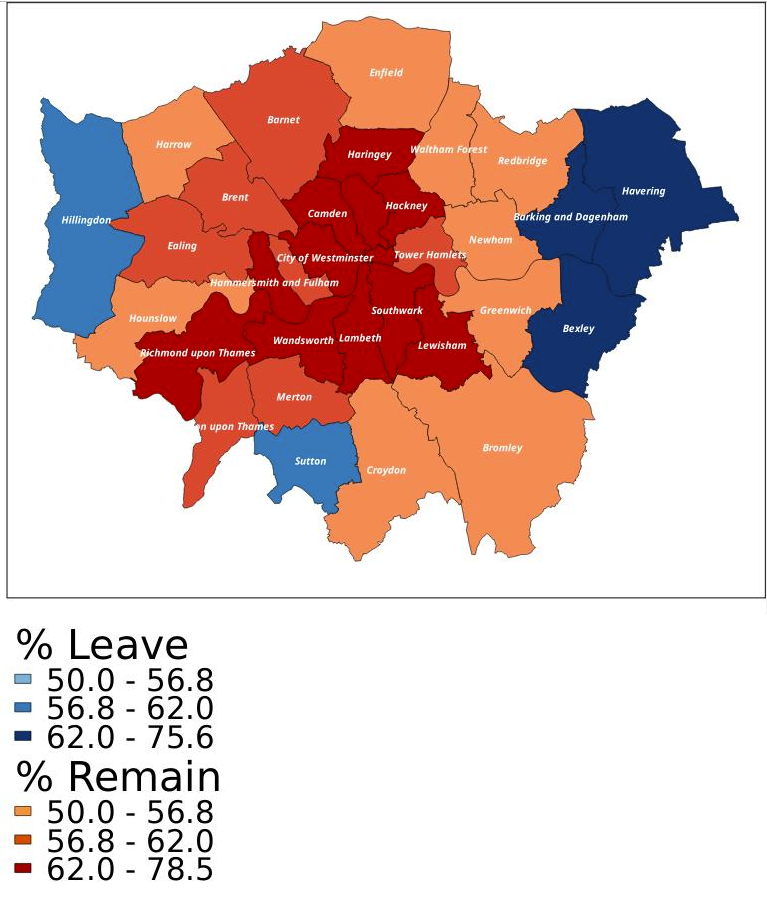 The BBC has ward-level data, but alas they don't depict it on a map, however they do offer this analysis for some (Greater) London areas:

Ealing and Hounslow are neighbouring multi-ethnic boroughs in the west of London with large Asian populations, where - in contrast to the national picture - non-white ethnicity was associated with voting Leave, particularly in Ealing. Both boroughs shared a varied internal pattern of prosperous largely white areas voting strongly Remain, poorer largely white areas preferring Leave, and the Asian areas tending to be more evenly split.

Ealing voted 60% Remain, with Southfield ward hitting 76%, but in contrast the Southall wards which are over 90% ethnic minority were close to 50-50.

In Hounslow the richer wards in Chiswick in the east of the area voted heavily Remain (73%), but the poorer largely white wards at the opposite western end in Feltham and Bedfont voted Leave (64-66%). Osterley and Spring Grove was also 63% Leave, the highest Leave vote in any individual ward in the UK with a non-white majority for which we have data.

The south London borough of Bromley narrowly voted Remain. Those parts which did not do so by a significant margin were the Cray Valley wards, largely poor white working class areas; and Biggin Hill and Darwin wards, locations to the south which contain more open countryside and lie outside the built-up commuter belt.

In Croydon in south London, places which voted Leave by substantial amounts were New Addington and Fieldway, neighbouring wards with large council estates.

So the poor & white suburban areas seem to have voted consistently enough for Leave in Greater London as they did nationwide. The Asian voting pattern differed in London than elsewhere though.

Not the answer you're looking for? Browse other questions tagged united-kingdom brexit london .

16
How did Boris Johnson manage to be elected Mayor of London for two terms when London is usually staunchly Labour?

10
Could the City of London leave the EU while the UK remained?
3
Did those who voted to stay in the EC also vote to leave the EU?
35
What happens if it is proved that "vote leave" campaign broke campaigning laws?
6
Did Nigel Farage ever explain why the UK should leave the EU?
2
Why did so many MPs not vote in Meaningful Vote 3?
11
Why did the Government cancel Saturday's Brexit-deal vote?
16
How did Boris Johnson manage to be elected Mayor of London for two terms when London is usually staunchly Labour?
2
Is there a more in-depth explanation why Asians in (Greater) London voted to leave the EU, breaking with the national trend for ethnic minorities?
0
Why is it possible for influential foreigners to commit frauds in their respective countries, flee to London, and live there safely for years?