"The choice for Labour is to renew itself as the serious, progressive, non-Conservative competitor for power in British politics; or retreat from such an ambition, in which case over time it will be replaced."

The emphasis on the word "replaced" has been added by me. However after listening to his speech the tone seemed to suggest that he considered it possible for the Labour party to cease to exist, unless radical changes were made to restore confidence given the scale of their defeat.

I understand that in this sense, the word "replaced" could also mean that the party's leadership would be replaced by new leadership with a completely different strategy from Jeremy Corbyn and those in the party at the time of the General Election.

However this got me wondering, given the Labour party has existed since the 19th century, is it possible for the party to cease to exist? What conditions and processes would be required in order for that to happen? Given that British General Elections are usually a two horse race between the Conservative and Labour party, would this result in a situation where there was essentially only 1 viable party for leadership of the country?

As the people in the party won't cease to exist, it is generally unlikely that a party can completely vanish. Those people are likely to be in some party. But a mainstream party can cease to exist by merging, splitting, fading, rebranding or formal dissolution.

As examples, The SDP was a major party in the 1980s. It had similar policies to the Liberal party, and so an increasingly close alliance formed. Eventually the parties merged to form the Liberal Democrats. You can argue that the SDP ceased to exist, but many of its personalities and policies continue in the Lib Dems.

Other parties can undergo schisms. The result can be different groupings that may use the same name but can be very different parties. The splits and mergers over the question of "corn laws" (ie free trade with Europe, American and the Empire; this was brexit 1840s style) and Ireland, led to a completely reorganised set of parties, with the "Tories" and "Whigs" ceasing to exist and Conservative and Liberal parties emerging from them.

A party can simply fade away. We have seen this recently with UKIP. It has ceased to exist as an effective political force. This is most likely for a narrowly focused party, whose aims are either achieved, or become seen as unachieveable. This seems to be what Blair is warning about: If the Labour party's aims are not considered to be realistic it might become a political irrelevance. As with the emergence of the Brexit party, the same people may join another party with similar aims.

A party can cease to exist in name as a result of rebranding. This can happen if policy change means that the name of the party doesn't reflect the new stance. There was some suggestion that Tony Blair might rebrand the Labour party in the 1990s, but he chose not to.

Formal disolution is possible for most organisations. But at the point that a party dissolves itself, without merging or splitting, it has probably ceased to function. A small rump of SDP members didn't merge with the Liberals in 1988, and instead continued as the SDP. After being beaten by the Monster Raving Loonies, the party formally dissolved in 1990, however a reconstituted party with the same name was formed shortly after. Nevertheless the SDP was irrelevant and has functionally ceased to exist.

Let me answer with another question: what did it take for the Liberals to become a minor party in the UK, when they once were a major one? The answer is basically deep internal divisions within the party and loss of credibility with the electorate. Actually, the re-emerged Lib Dems are a center-left party, so potentially a threat to Labour, especially if Labour loses the actual worker base, which they seem to be on their way to (but to the Conservatives) at least in the last election. Speaking of which, Labour lost working-class voters to the Conservatives and higher-educated voters to the Lib Dems. 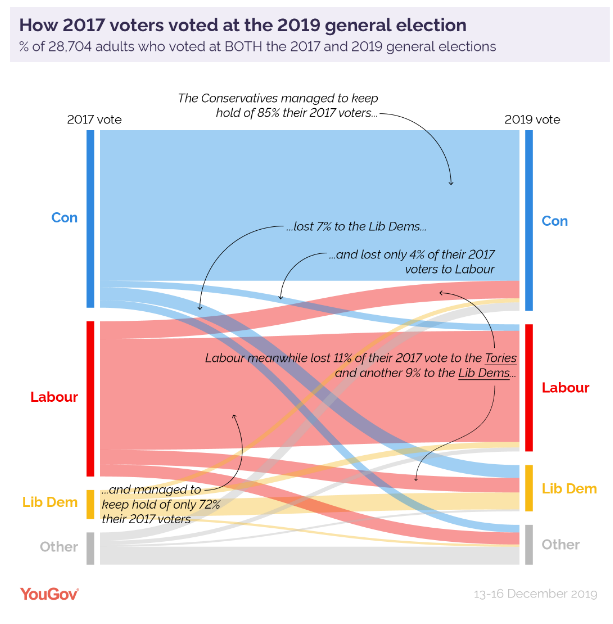 An acceleration/repeat of this process could [in theory] lead to the loss of status of Labour as a major party. It's not a given that a dominant left-wing party needs to be (nearly) Marxist... see Ireland for example, where their Labour party is a minor one.

Actually UK's Labour is already a minor party in Scotland, where the SNP has combined a leftish general policy with Scottish nationalism.

(Of course, it's not a given that the last UK election predicts the next one. The Conservative gains with the working class could well be temporary outside of a Brexit context, despite the more populist measures that the Conservatives are taking e.g. with respect to bolstering the NHS. If anything, the UK elections of the past decade have been known for voter volatility.)

The Liberal Party of UK used to be a major party that either formed the government or was the Official Opposition. They are a third party now in terms of their popularity. But this party still exists even after more than 100 years since its founding.

I think this is a more likely scenario for Labour, if they lose more of their popularity. But it's premature to talk of Labour's decline. Because they still form the Official Opposition, and the Conservatives don't have such a large majority that they can't be defeated in the next election.

People are just playing politics when they say that the Labour Party might cease to exist. Because it's nowhere close to this now.

There is a difference between the literal "cease to exist" and "cease to have any credible chance of holding power".

Don't forget that Blair is a very special case here, since he took the name of Michael Foot's "Labour Party" (whose 1983 election manifesto has been described as "the longest suicide note in history") and transformed it from something which won 209 seats in 1983, to winning 418 seats in 1997 years later.

Generals love re-fighting the last war, and apparently Blair thinks the Labour party needs to repeat the sort of transformation he made to it. But that ignores other structural changes such as the growth of the SNP and the wipe-out of Labour's Scottish MPs, which ironically could at least partly be attributed to Blair's setting up of the Scottish Parliament.

I would tend to agree with Blair's analysis that in its current state the Labour party could be characterized as the "Trade Union Party" surviving in the few remaining northern industrial areas, plus the "London Champagne Socialist Party" who care more about political philosophy than political power. (Momentum's apparent position that half a million claimed activists would produce a political majority was simply delusional, IMO).

Of course the Labour party could continue as that sort of minority party for a very long time, just like the renamed Liberal Party, or minorities like the Greens. The more interesting political question is what happens when the UK no longer has a reason to be a one-party (Conservative) state plus a collection of permanent minority parties, including a bloc of 50 independence-seeking Scottish nationalist MPs ...

Not the answer you're looking for? Browse other questions tagged united-kingdom election parties .

0
What does it take to start a new political party in Wisconsin
2
Do national political parties in the US exist in student government? (College)
9
Why didn't Labour's 2017 manifesto contain a commitment to abolish the House of Lords?
2
Any survey-based analyses of “why you voted that way” for the 2017 UK election results?
3
Can a political party prevent their members from running for office?
10
Has Nigel Farage given any recent indication whether his party is going to contest a general election against Boris Johnson?
10
What does “bracketing” a UK political party mean?
9
Where would UK political parties fit on the US party political spectrum?
5
Is there a mechanism for forcibly removing the leader of the Labour Party?