Why has Donald Trump's approval rating been rising since impeachment processes started?

It appears that recently, Trump's approval rating has been rising despite impeachment, and the accusations and evidence against him.

How can this be explained? Has there been anything published about why the public continue to support him, and indeed seem to be becoming more likely to do so?

From the very same article you cited about the very same poll that showed that Trump’s approval is up by about 6 percentage points:

Support for impeaching and removing the president has dipped slightly among independents, Gallup found, from 55 percent and 53 percent in two October polls to 48 percent in the latest survey.

Given that the drop in support for impeachment is exactly proportional to the increase in support for the President, and that there’s very little else in political news being reported at the moment, the simplest explanation is that independent voters are not being persuaded by the impeachment case that the Democrats in Congress have put forward.

Approval rating fluctuates for every president, as it's based on (a tiny subset of) the people's opinion, so you have to get the average of not only multiple polls, but also across multiple measurements in time, to see if it's actually trending up and trending down.

This is the historic trend of Trump's approval rating (black line) and disapproval (red line), over the past two years. 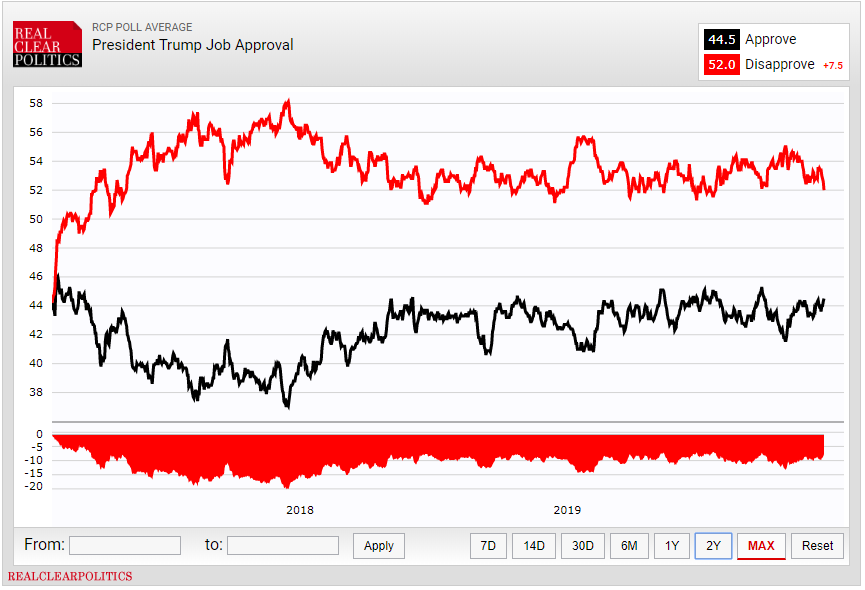 Here's me roughly averaging it his approval polling, by eyeballing it (blue line). 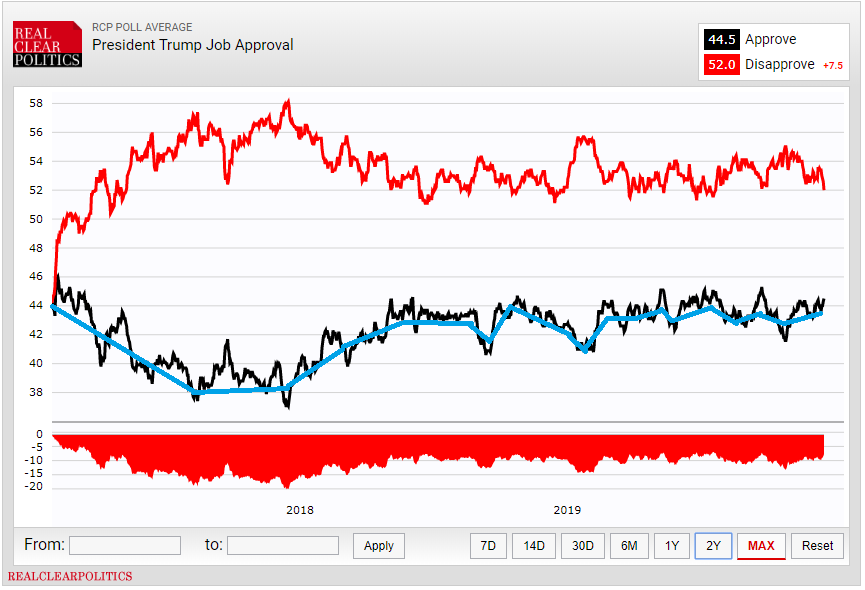 Here's me adding in the start and end of the Russian investigations, and the start of the Ukraine scandal and impeachment: 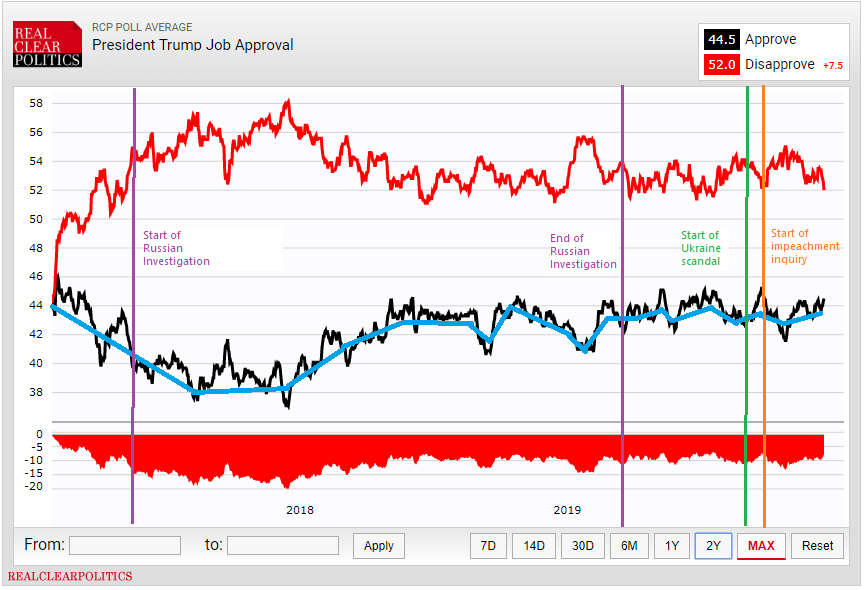 When you look at the broad picture, you notice that as he got ensnared in the Russian investigation and continued criticism and bad press over treatment of illegal immigrants, he dropped in approval, but it has since balanced out and has mostly held steady over the past year-and-a-half, with a small gradual upward trend as the economy has continued to do well. By "holding steady", it still has the regular up and down bouncing of people's opinions in the average of a dozen tiny polls measuring a thousand people here, a thousand people there, out of a nation of >325 million.

Trump's gradual upward trend pre-dates the impeachment process, by over a year.

Further, the fluctuations are of a few tiny points here or there, e.g. 1 out of a hundred people changing their mind slightly from "Extreme disapproval" to "Mild disapproval" or from "Neutral" to "Mild approval". These are not big swings of the population, if you look at the scale on the left side of the chart.

The impeachment hearings were rushed through so quickly, that it's really too short of a polling period to filter out the regular fluctuations of Trump's approval from the effect of the impeachment.

The impeachment hasn't had a substantially noticeable impact one way or another, with the exception of a small blip right when it began.

That much I can discern by looking at the raw polling data. So, the question becomes not, "Why has impeachment helped Trump?" (which it doesn't seem to have - at least, not enough evidence exists to substantiate that), but rather "Why hasn't the impeachment hurt Trump?". To answer that new question, we have to enter speculation, which obviously gets distorted by our personal biases.

Any change in the polling we're measuring are mostly people who are neither concretely locked into being pro-Trump (concreted pro-Trumpers are solidly 38% of the country who've supported him without fluctuating) nor people concretely anti-Trump (solidly 42% of the country who haven't wavered against opposing him).

I would speculate, based on my biased interpretations of the trends visible in the charts above, that voters that are neither permanently Pro-Trump nor permanently Anti-Trump were really bothered by, and concerned about, Russian interference, and that the Russian investigation hurt Trump with these voters. The national narrative was, "Trump himself explicitly colluded with the Russians to win the election, and is working to impede the investigation."

But after the Russian investigation ended there was little concrete evidence that Trump colluded with the Russians (though he did impede the investigation in my opinion, but Mueller refused to issue a "verdict" on that), and non-concreted Americans mostly thought Trump was vindicated on the primary charge: outright collusion with Russia.

Then, when the Ukraine scandal began just a month or two later after the Russian investigation ""cleared"" Trump (or at least didn't convict him badly enough to be impeached), to these independents, it possibly failed to work against Trump, for several reasons:

(Note: I keep using the word "optics", because we're talking about why public polling of random citizens many shift one way or another. In such cases, optics is everything, as unsubstantiated opinion is exactly what the polls are measuring).

All this adds up so that people who are neither rabid anti-Trump nor rapid pro-Trump could feel far less worried about the Ukraine scandal than they did about the Russian scandal, and isn't letting it tamper their slightly rising approval over the good economy.

Note: As the question itself is one that can only be answered by speculating individual voters opinions, I've tried to provide reasons why they might have leaned more Trump-ward over the impeachment process. No concrete answer can be given without examining the unique individual minds of the voters polled.

The easiest explanation is that it's a matter of who people believe. The Republican stance on the impeachment has been that it is a partisan hitjob intended to oust a democratically elected President for no justifiable reason. They're using Pelosi's own words against her from when she stated that she did not want to move forward on impeachment unless there was strong bipartisan support. And unfortunately, there has been zero bipartisan support, and there has even been dissent within the ranks of the US House of Representatives, with one Democrat expected to switch parties in January. He and one other Democrat from a strongly red district voted against impeachment.

The other defense talking point has been to read the transcript of the Ukraine call. These next bits are primarily conjecture and personal opinion, with limited documented support, so please take them with a grain of salt; The transcript is too long and dull of a read for the average voter. It's 5 pages of largely dull conversation that, without a decent knowledge of external factors (the way Congress had already approved aid, the other conversations denying a white house visit, etc.) doesn't look all that nefarious. Most people don't really want to sift through the document-- they want a snappy excerpt from it that supports the stance they've already taken, and they're inclined to believe whoever they hear that has agreed with them in the past. As such, their views on impeachment are those of whichever broadcasting network they've watched the most.

The final factor (and the one that I believe influences impeachment views the strongest) is that Senator Mitch McConnell and Senate Republicans have made it clear that they intend to make the impeachment trial as swift as possible, and to settle on no convictions ASAP. The Republicans have a simple majority in the Senate at this time, and that's all it takes to override the objections of the minority party and deny admittance of evidence that they do not wish to see. Many believe that this means McConnell will block key witnesses who would be exceptionally damaging to the President, including those who have been barred from testifying in the House's prior investigations. When Bill Clinton was previously impeached, his support grew following the Senate's failure to convict him. Many persons who do not support Trump oppose impeachment because they believe that a failure to convict will strengthen his run in 2020 and could lead to 4 more years of Trump in the White House.

Any answer to this question will be opinion based...

It seems obvious that the Democrats have not made their case to anyone other than people already predisposed to dislike Trump.

The bump in popularity most likely is independent fence sitters not liking Trump more, but disliking how the House Democrats have spent most of their time pursuing Trump, and the manner in which they have done this.

I think we should look at what the voters are saying

"'It’s a joke. All they do is make up lies (ed note: Democrats),' said Robert Korhonen, of Fort Lauderdale, one of about 100 people who attended the monthly Americans for Trump Broward meeting Tuesday night — in a county that’s biggest Democratic stronghold in the state. 'It’s just a big frigging waste of time and I think most Americans are smart enough to understand what’s going on here.'

"Democrats, Korhonen added, are 'trying to throw as much crap against him as they can. Trump is not guilty of anything. He hasn’t done anything wrong. They keep throwing crap and trying to trap him in stuff. But he’s innocent. They got nothing. They got nothing.' "

"Of the more than dozen Democratic presidential candidates who have stumped in Storm Lake, only Tom Steyer brought up impeachment. Nobody is asking. They want to know about immigration (where half the town of 15,000 is Latino) and healthcare, and what to do about unreliable weather and corn yields.

“I’ve been a Democrat all my life, but when he ran for office, when I could see what he was standing up for — for the borders and the different solutions he brought forth — I felt that I definitely needed to vote for him,” Sparker added.

Joe's answer is correct, but I think there is an additional reason. It has to do with voters' perception of fundamental fairness. By now it is indisputable that the FBI omitted key exculpatory evidence from FISA court filings during its investigation of Carter Page. Even Adam Schiff says they made serious mistakes. And now it looks like Trump did in fact pressure Ukraine to go after Biden.

But some independent voters are going to say, wait a minute. If the Democrats have been playing dirty with their investigations against Trump, why does it make sense to impeach Trump for trying (and failing) to play dirty and get Ukraine to investigate Biden?

EDIT: on the question of whether the FBI wrongdoing was supported by Democrats -- Schiff and Nunes had a lengthy argument about whether or not the FBI was breaking FISA rules. You may object that Schiff's assertion that the FBI was playing it straight is not the same as support of rule-breaking. But I suspect a significant number of voters will see things differently.

Not the answer you're looking for? Browse other questions tagged united-states donald-trump public-opinion trump-impeachment .

3
How would Donald Trump benefit from a commuted sentence for Rod Blagojevich?
48
Why has Speaker Pelosi been so hesitant to impeach President Trump?
10
What was the stated reason for giving Trump this award?
3
Has there been a decrease of US aid to Iraq under Trump?
12
How did the US administration usually refer to COVID-19 before the Chinese foreign ministry started claiming the virus is of US origin?
24
How has the handling of the coronavirus outbreak (CoViD-19) affected Donald Trump's approval ratings?
6
Why has Narendra Modi's approval rating remained high despite massive protests by Indian farmers?