To whom does the Islamic State sell their oil?

The Islamic State (IS) is largely funded, it is often said, by oil revenues. This New York Times claims that the value of the output of the oil fields under IS control is $1 million to $2 million dollars per day. It goes on to state that the Iraqi fields under their control "may produce 25,000 to 40,000 barrels of oil a day -- worth a minimum of $1.2 million in the underground market."

The question: Who makes up this underground market? To whom is IS selling their oil?

Islamic State oil is being sold to organized criminals in Turkey, who conceal the oil's origin and sell it on the open market.

This activity was spearheaded by Saddam Hussein's Iraq as a means to circumvent the oil embargo.

It is an open question to what extent Turkey is deliberately allowing this to occur.

The government of Turkey. Though this is hotly contested, there is some direct evidence and much circumstantial evidence to suggest that the Turkish government has at the very least facilitated/mediated the purchase of oil from IS (if not actually buying oil itself). 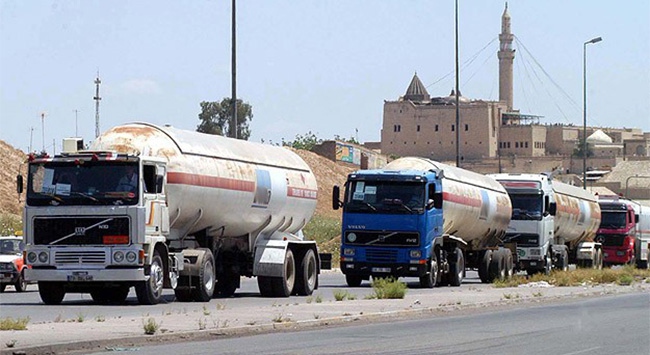 So, circumstantially, which would be the most likely culprit? Turkey.

Now, as for proper evidence, I'm quoting from this blog post:

US special forces raided the compound of an Islamic State leader in eastern Syria in May... The target ... was an Isis official responsible for oil smuggling, named Abu Sayyaf. He was almost unheard of outside the upper echelons of the terror group, but he was well known to Turkey. From mid-2013, the Tunisian fighter had been responsible for smuggling oil from Syria’s eastern fields, which the group had by then commandeered. Black market oil quickly became the main driver of Isis revenues – and Turkish buyers were its main clients.

... In the wake of the raid that killed Abu Sayyaf, suspicions of an undeclared alliance have hardened. One senior western official familiar with the intelligence gathered at the slain leader’s compound said that direct dealings between Turkish officials and ranking Isis members was now “undeniable”.

Al-Monitor quoted a member of the Turkish opposition party CHP (the secularist/nationalists/militarists/Kemalists):

The Islamic State of Iraq and al-Sham (ISIS) has been selling smuggled Syrian oil in Turkey worth $800 million, according to Ali Ediboglu, a lawmaker for the border province of Hatay from the main opposition Republican People’s Party (CHP).

Sadik Al Hiseni, the head of the security committee in the city of Diyala in Iraq, says they have arrested several Turkish tankers trying to take ISIS oil out of the province of Salahuddin.

And you can find lots and lots more by web-searching.

Edit - July 2017: Turkey no longer has any border with the Islamic State, So obviously no sales since the cut-off; but the sales may well have ended before that. Probably even sometime before the Turkish invasion of North Syria.

Another major buyer is Israel and it makes sense too. It shares border with Syria so transfer of barrels is easy. It has booming economy and industries which means they have capacity to purchase it. All other surrounding countries are troubled except Turkey which has already been accused of buying oil from them.

15
How truthful is the Russian allegation, that Turkey is buying oil from ISIS?