Is there any country other than Austria with a conservative-Green government?

Austria is now going to have a coalition government between the right-wing People's Party and the Greens.

This is interesting; the parties are, from a US perspective, pretty much opposites of each other, but the right-wing party doesn’t seem to have compromised outside of climate change—the People's Party for example, plans to impose restrictions on immigration in the new government and lower taxes, and the Greens plan to fight climate change.

Is there any other clearly right-wing government that is pro-climate action, or is this a completely unique case?

This question is a bit vague. Generally speaking, it is mainly the right-wing populist parties that are engaging in various forms of climate change denialism. The more traditional conservative European parties are usually not doing that... In (European) countries where there isn't a two-party system, voters usually have a choice of several right-wing/conservative parties... some populist and some less so, some engaging in climate-change denialism, and some not.

If we take this question nominally, i.e. coalitions between Greens and [traditional] right-wing/conservatives, these have been observed before at least at Länder level in Germany:

In two cases the Greens entered into a coalition with the Christian democrats (CDU), crossing traditional political camps. After the black-green coalition in the city state of Hamburg (2008-2010), Hessen is the first larger state where black-green is being put to the test. In Baden-Württemberg both parties have been governing since 2016 in a converse constellation as green-black with the Greens leading the coalition as the strongest party.

Generally speaking however, both in Germany and elsewhere in Europe, the Greens are more likely to enter coalitions with left-wing (e.g. social-democrat) parties. It depends however on the "flavor" of the Greens though. In Finland for example:

Within the Green political family, the Finnish Greens are more moderate, certainly on taxes and welfare policies, and thus can accept broad coalition governments, which have always included at least one right-wing party.

Also that latter source mentions (alas without specifics) that

the Irish Greens even went as far as to form a coalition with two right-wing parties.

Another thing to note is that in Austria the ÖVP (People's Party) is not as opposed to climate-change mitigation as you might assume:

The ÖVP policy is to reduce carbon output, but not at the expense of commuters and people in rural areas.

“We do not want to ban people from driving when they need to, but we want to significantly reduce CO2 emissions,” Kurz has said.

There's another right-wing (populist) party in Austria, the Freedom Party (FPÖ) which is not part of the present (Green-including) coalition, but which were in coalition with the ÖVP in the previous government. The FPÖ has been more critical (or at least more silent) of climate change than the ÖVP at least in the past. While in power, the FPÖ has pursued some goals that might be described as anti-Green, including eliminating smoking bans and other forms of deregulation. The FPÖ also held more clear views on climate change... until recently...

Until recently, the FPÖ in Austria held a similarly sceptical position on climate science to their German [AfD] counterpart. In an interview in December 2018 with Der Standard, for example, the former party leader (and until recently vice chancellor of Austria) Heinz-Christian Strache stated that “Whether humans can affect the climate is an open question. Climate has changed for thousands of years. The Sahara desert once was the bread basket of the Roman Empire.” (The fact that the climate has always changed does not, of course, disprove human-caused climate change.) As with the AfD, it seems that US climate denialism is influential; there are close ties between the FPÖ, the influential Friedrich Hayek Institute in Vienna, and the climate-sceptic Heartland Institute in the US.

However, after Strache was forced to resign in May 2019 (due to the infamous “Ibiza scandal”), this position has changed. The new party leader, Norbert Hofer, declared in an interview that he wants the FPÖ to be “the” climate protection party. It is explicitly declared on their website that “climate change is reality and cannot be denied”.

Referring to FPÖ’s party colour, Hofer has gone so far as to declare that “the blues will turn green”, though he advocates “sensible” environmental protection without what he calls ‘Klimahysterie”’ – a ‘climate hysteria’ which he contrasts to “concrete measures”. This has meant that, for example, the FPÖ did not align with the other Austrian Parties who, after an official all-party-meeting with the with leaders of Austria’s Fridays for Future movement in July 2019, supported the declaration of a “climate emergency” in order to “make curbing the climate and environmental crisis the top political priority”.

While stating their support of policies to combat climate change, the FPÖ reject any policy that clashes with the interest of ‘Kleinenmannes’ (or ‘the ordinary guys’) and that “punishes” commuters and diesel drivers and profits only the few: “The FPÖ is committed to climate and environmental protection and has already presented numerous policy proposals. We are not supporting ‘cheap climate populism’ however”. They argue that reducing C02 emissions without a concomitant effort from the USA and China is futile.

So, as you can see, there's a substantial amount of flexibility on climate policies in right-wing parties in Europe, even among the the populist ones nowadays [if leadership change is part of the equation], which means that coalitions with Greens might be possible depending on the circumstances...

Actually, one source even mapped where the populist right-wing parties in Europe stood on climate change policies (before the recent FPÖ change), although there can be boundary problems with such strict categorization: 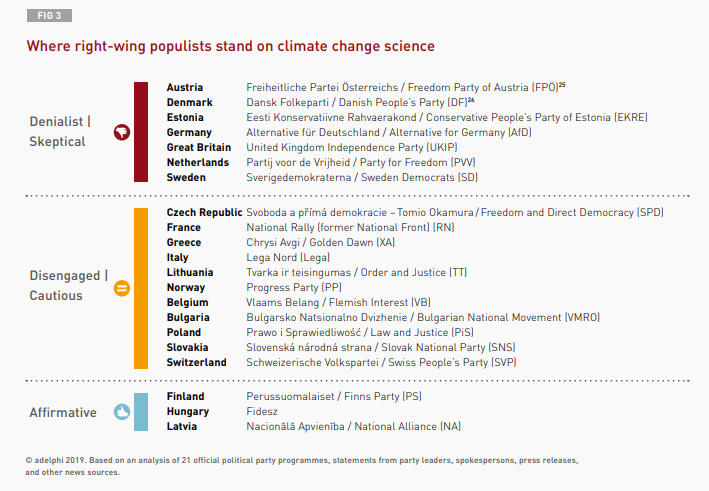 As noted further in that [long] paper (pp. 22-23), many of these parties nonetheless oppose EU rules on climate change as they claim these would be ineffective, in line with their general Eurosceptic stance. Still, their actual opposition to such EU measures varied greatly with the party in question: 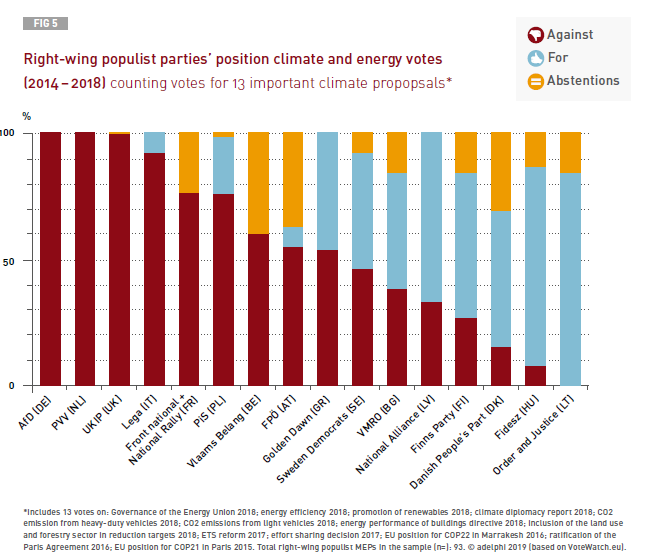 Not the answer you're looking for? Browse other questions tagged conservatism climate-change comparative-politics green-party .

3
Is there any self-professed conservative transhumanist?
9
Do any countries other than Azerbaijan have education requirements for a national elected office?
3
Are there any systems (in other countries) comparable to the overt dualism of Puntofijismo?
6
Have any Democrats embraced any new policies or compromises in an attempt to appeal to conservatives that are unhappy with Trump?
2
Has there been a comparison of party discipline in the UK with other European countries?
0
Are there other EU countries besides Romania and Hungary where the ECR and ID did not gain any seats in the last EU elections?
27
Has any country's government concluded they need more decentralization to fight Covid-19 or future pandemics?