Is there a comparison of the cost structure of residential electricity in the EU?

I can easily find the total cost of residential electricity for each country in the EU, but I would like to know/see how much of that is taxes and fixed network tariff. I could find such information for Germany (which has the highest prices), from some years ago.

But I'd like to know if the lower cost in the other EU countries is due to lower taxes/tariffs or lower production costs. 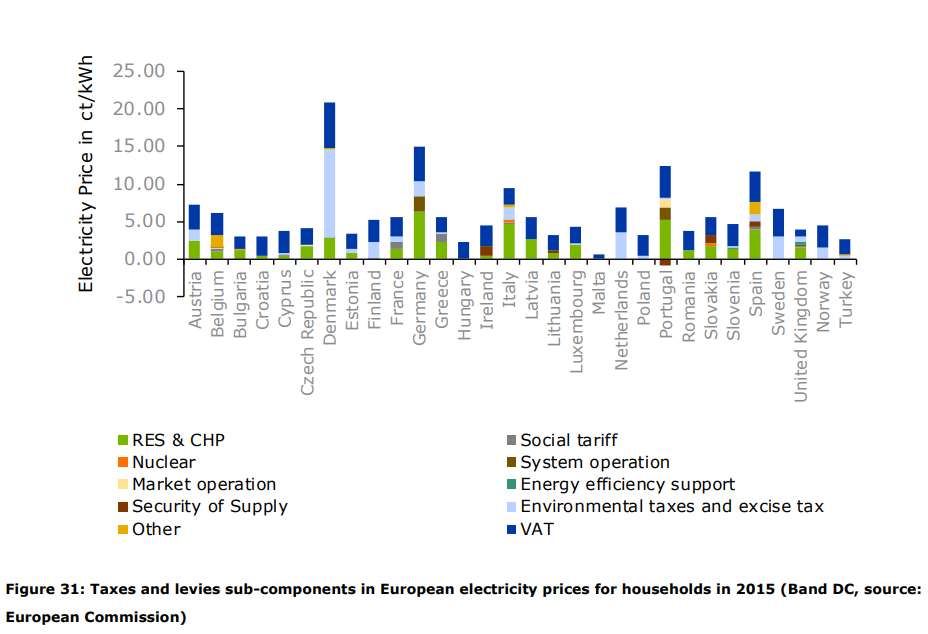 I found a simpler but more recent graph in another EU report, which being for 2017 has Germany ranked first, but this one also has the production cost in the breakdown.

This latter paper also has a similar breakdown of industrial electricity. Interestingly, Denmark is far from the top in the latter category.

If someone knows of a better source/study on this (e.g. a regression) I'd accept that as a better answer.

Not the answer you're looking for? Browse other questions tagged european-union taxes statistics energy-policy .

2
Why is the cost of food stamps 10 times higher than in 1938 in real dollars?
14
How much will the ObamaCare tax penalty cost?
1
Why does Tax Freedom/Cost of Government day differ so much in the United States, and how are they calculated?
2
Is there data that looks at income inequality by examining total income over each person's life?
10
Us Income Inequality adjusted for cost of living differences on a per county/city basis
6
How much is the wall across the Mexico & US border going to cost?
0
What is the total estimated cost of complying with GDPR?
6
Any problems with zero corporate income tax?
3
Is there a ranking of states population density based on usable land area?