Are there any examples of official Nazi glorification in Ukraine?

Recently, the Israeli Foreign Ministery protested against Ukraine's glorification of Nazis. Ukrainian officials responded that this is the inner dealings of Ukraine. An official protest is a rather big diplomatic issue, which cannot be triggered by something minor.

But are there any examples of official Nazi glorification in Ukraine?

If there are no such examples, then this complaint is less logical - the Ukrainian government cannot take responsibility for each and every group of radicals.

From your linked article:

the government-sponsored honoring of Bandera and Andryi Melnyk

Specifically, it was the city government of Kyiv which hung a banner of Nazi collaborator Stepan Bandera from a municipal building.

The original letter here. In addition to the honoring of Bandera, it also mentions public funds being spent on celebrating Andryi Melnyk - another Nazi collaborator - as well as Ivan Lypa and Yurii Lypa.

The current cases fit in with a history of glorifying Nazi colaborators such as Bandera, who was awarded the Hero of Ukraine award by president Yushchenko in 2010 and has several monuments dedicated to him.

Disclaimer: I don't want to imply that Bandera is honored specifically for his Nazi collaboration (it's probably more his nationalism and anti-communism), nor that this is unique to Ukraine (in Germany, Schleyer or Rommel would be two of countless examples of Nazis still honored after WW2). This is a problem, but in no way does it represent the whole of Ukraine, nor does it justify the current war of aggression started by Russia, which was started for no legitimate reason.

Ukraine has adopted Law #2558 “On Condemning the Communist and National Socialist (Nazi) Totalitarian Regimes and Prohibiting the Propagation of their Symbols”, (review in English).

So it is simply illegal to glorify Nazi or Communist regimes, its ideologies, flags, other symbols, or any of its members. Whoever who has evidence against a Ukrainian citizen, official, or an institution to do so, can file a request to police or SBU.

It should be mentioned that the entire population of Ukraine was forced to collaborate with either Nazi or Russians during the WWII. Some people made the difference, but OUN/UPA generally did not; they fought for Ukraine's independence against both occupants.

This leaflet circulating in Ukraine is self-explanatory: 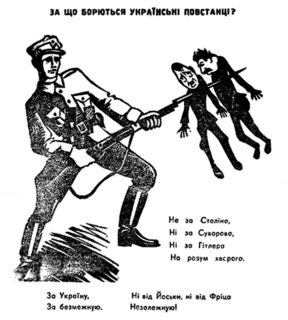 The International Military Tribunal at Nuremberg did not indict Bandera on any crimes against humanity, despite the tremendous pressure of the Russian prosecutors. The Tribunal papers contain a captured German document of 25 November 1941 that ordered (page 265):

"It has been ascertained that the Bandera Movement is preparing a revolt in the Reichskommissariat which has as its ultimate aim the establishment of an independent Ukraine. All functionaries of the Bandera Movement must be arrested at once and, after thorough interrogation, are to be liquidated..."

OUN-B, the Bandera-led faction of OUN, has been so dedicated of fighting against the Nazis that within two years 1941-1943, the Nazis had imprisoned or killed 80% of OUN-B leadership. You can hardly call this "collaboration".

Stepan Bandera himself was arrested in 1941 by Gestapo and has been enslaved in the Sachsenhausen concentration camp till 1944 specifically because of his refusal to rescind the Proclamation of Ukrainian statehood and to collaborate with the Nazi regime.

It seems to be difficult to "collaborate with Nazis" while staying in a Nazi concentration camp.

Unfortunately, there are still various Nazi groups operating in Ukraine today. Ukraine condemns and prosecutes Nazis, but the process is slow due to imperfection of law-enforcement institutions of Ukraine who are unable to tackle this problem. In addition, many Nazi organizations are supported from abroad which slows down the process. 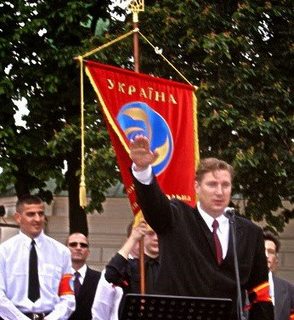 Eduard Kovalenko (on photo) was sentenced for 5 years in jail.
However, on December 2019 Russia has included him in POW swap list, and Kovalenko fled to Russia evading the justice.
It is not currently known why the Russian government salvaged this Nazi from the jail.

(1) The last, but not the least, the quoted article looks very biased: it is anonymous (signed by "Hamodia Staff"), it refers to an unnamed "Ukrainian diplomat in Tel Aviv", and its repetitive "collaborators" and "murderers" clearly indicates that the entire article's goal is antagonizing Ukrainian and Jewish nations in the verge of Holocaust commemoration ceremony.

The others answers are somewhat outdated regarding the role of Stepan Bandera and the attitudes toward him in Ukraine. Specifically, president Zelensky has a few weeks ago recalled the Ukrainian ambassador to Germany, Andriy Melnyk, over the latter's denial of the Bandera's role in the massacres of Jews and Polish during the Nazi occupation. The recall followed the protests by Israel and Poland (the latter being among Ukraine's most vocal supporters in its conflict with Russia.)

Bandera was controversially made Hero of Ukraine by President Victor Yuschenko, but this status has been since revoked:

On 22 January 2010, the President of Ukraine Viktor Yushchenko awarded Bandera the posthumous title of Hero of Ukraine. The European Parliament condemned the award, as did Russia, Poland and Jewish politicians and organizations. President Viktor Yanukovych declared the award illegal, since Bandera was never a citizen of Ukraine, a stipulation necessary for getting the award. This announcement was confirmed by a court decision in April 2010. In January 2011, the award was officially annulled. A proposal to confer the award on Bandera was rejected by the Ukrainian parliament in August 2019.

Bandera exemplifies the tragic history of the Eastern Europe during WW2, where the only way of fighting against Soviets meant allying themselves with Nazis and vice versa. Some may feel the very mentioning of Bandera Nazi collaboration as anti-Ukrainian... however one may equally point out that Ukraine has grown from a post-Soviet country, glorifying anyone anti-Russian, into a modern pro-western society, capable of facing its controversial past, the way other European countries do.

Nazism is forbidden in Ukraine by the accepted law 2558, so the "official glorification" for exactly Nazism is legally not possible.

Glorification for activities completely irrelevant to Nazism is unlikely a glorification of Nazism. Israel generally seeks that organizations and people with the known Nazi or antisemitic views should not get any respect, regardless of what else have they done. Understanding the extend to which Jews suffered, this kind of respect likely should be granted for the Jew community. They have right to demand such things, with all they national populations wiped.

Quite often some group or organization participates in the resistance against Soviet army and, after the state gets independence, is honored just for this resistance. They more questionable views or even actions may not even be known by majority at that time. Then streets get renamed and memorial plaques removed, but even before that, they were glorified because of other reasons than Nazism.

One example is the case of Karpatska Sich veterans. This is a far-right paramilitary group. It was founded originally in 1938, and was a local ally of the Nazis in the Transcarpathian Region. It was officially banned after WWII, but was reestablished in the last decades. Since then it has carried out several attacks and threats agains minorities of the region like Hungarians, Gypsies, etc. There was no official effort from the authorities to dissolve this group.

Yes. The state flag of Russian Federation and close derivatives of it has been raised by Russian armed forces over destroyed cities of the Ukrainian territories (image credit): 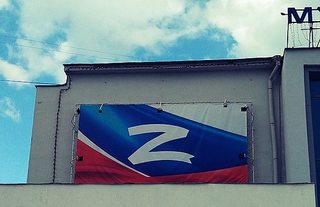 I initially assumed that this question is limited to the glorification of the "classical" WWII Nazi or they very close successors (SS, Hitlerjugend, etc) with relatively few symbols (swastika, etc) that are all officially banned in Ukraine. But if it expands to all "neo-Nazi" on that the references can be found and whatever symbols they use, it may be relevant to point out that it is not difficult to find some sources accusing Russia itself as a new form of Nazism (here example). This is mostly for invading another sovereign country, but also for some rhetoric that another nation they do not like should be wiped from the globe (source).

This point of view will not find a widespread support in more pro-Russian sources but maybe should be included here for the completeness of the coverage.

17
Who are the alleged Nazis in the Ukraine government?
5
Is present-day nazism correlated with their countries' allegiance in WWII?
-1
Why is the Belarus plane grounding incident treated more harshly than a similar one caused by the USA?

11
Are there constituencies for the partition of Ukraine?
20
Why don't Russia and Ukraine enter an official state of war?
5
Were there any "Punch A Nazi" polls done in the US?
6
Did the Nazi regime resort to any nationalizations?
1
Are there ANY examples of corruption in Ukraine where the USA has an actual stake?
11
What are the concrete demands of Germans who want to "put an end to" (Schlussstrich ziehen) nazi commemorations?
21
What are some examples of Ur-Fascist Newspeak?
17
Who are the alleged Nazis in the Ukraine government?