Why does the Democratic Party perform well in New England?

A lot has been written about the current demographics of the voter base of the Republican and Democratic parties in the United States. A Google Search of Trump popular white working class will result in many article describing how Trump and the Republic Party are rural (or small city) white working class voters. Conversely, People living in urban areas, women, college graduates, sexual and gender minorities, millennials, and black, Latino, Jewish, and Asian Americans tend to support the Democratic Party.

Except in New England. New England is 83% white, the only big city is Boston, yet since 1992, in Presidential Elections, either 5/6 or all 6 states voted for the Democratic candidate. Why does New England seem to go against the (admittedly oversimplified) model where rural/white/working class are more likely to vote for the Republican Party, and urban/nonwhite/well educated vote for the Democratic Party? This is completely opposite from, for example, the Great Plains states, similarly white and rural but overwhelmingly Republican. Why is it so different?

In part, it has to do with the lower religiousness in the area, as well as different kind of religiousness compared to the midwest etc.

[New England] evolved into the most secular part of the country. In the words of one regional missions group, “pulpits that once boasted gospel preachers like Jonathan Edwards and George Whitefield now proclaim universalism, liberalism, and postmodernism.” A Gallup poll this year [2012] found that the four least-religious states in America are in New England. 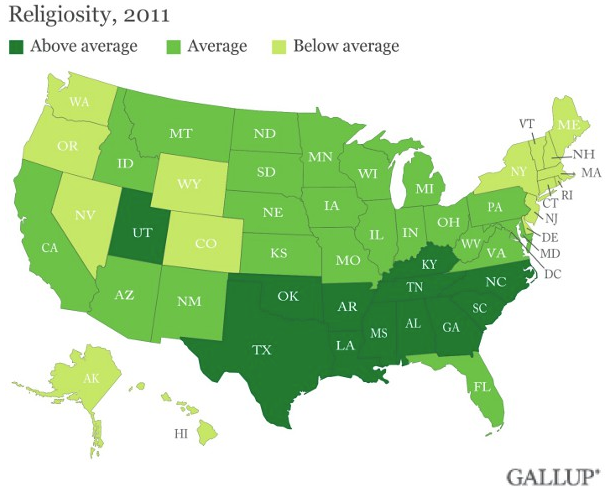 Of course, this is a bit of a "chicken and egg" problem, as one can then ask, what explains the latter trend.

Historically, the Catholics (who were more prevalent in New England) tended to vote Democrat, but that's no longer the case much today, so that's a non-explanation nowadays. (The distribution of Catholics has also changed in the US, to being more uniform, in tandem with the increase in Latino population. Nevertheless, the 2010 census recorded 45% of Massachusetts as Catholic.) As more general picture of religious distribution of relevance to our issue (alas in words):

There is substantial variation in religious identity between the four regions of the United States. Collectively, white evangelical Protestants are twice as large in the South (22%) and Midwest (20%) as they are in the Northeast (8%). Twelve percent of residents in the West are white evangelical Protestant. In contrast, Catholics represent a much larger share of Northeastern residents. Roughly three in ten (29%) residents of the Northeast identify as Catholic, compared to about one in five Westerners (21%), Midwesterners (19%), and Southerners (17%).

Notably, there is significant racial and ethnic variation among Catholics by region. White Catholics outnumber Hispanic Catholics by a wide margin in the Northeast (20% vs. 7%, respectively) [...]

However, despite white Catholics not being overwhelmingly Democrat nowadays, they are more split than the white Evangelicals are, e.g. in support of Trump. 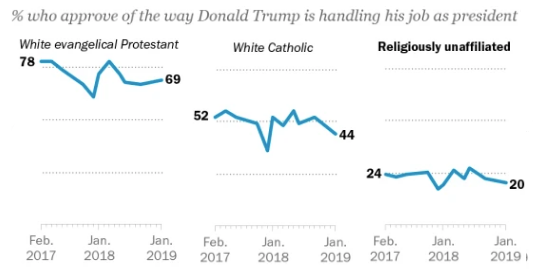 So, on this dimension, New England is "double whammy" for Republicans: fewer religious people and those who are religious are more likely to be of the "neutral" religion (as far as party orientation goes).

Educational attainment (e.g. % of Bachelor's degree) seems above US average in many states in New England (at least in Massachusetts, Connecticut, Vermont, New Hampshire, Rhode Island; only Maine is [slightly] below US average). This generally correlates with Democratic party preference (and liberal ideas--the so-called "diploma divide", particularly among whites) nowadays.

The Atlantic has a interesting profile of some Republican governors in New England. In a sentence, they are lot more liberal than Republicans elsewhere on issues ranging from gun control, to climate change, to abortion support etc.

Wikipedia has bit of blurb on this topic too (supported by some citations):

Though New England is today considered a Democratic Party stronghold, much of the region was staunchly Republican before the mid-twentieth century. This changed in the late 20th century, in large part due to demographic shifts and the Republican Party's adoption of socially conservative platforms as part of their strategic shift towards the South. For example, Vermont voted Republican in every presidential election but one from 1856 through 1988, and has voted Democratic every election since. Maine and Vermont were the only two states in the nation to vote against Democrat Franklin D. Roosevelt all four times he ran for president. Republicans in New England are today considered by both liberals and conservatives to be more moderate (socially liberal) compared to Republicans in other parts of the U.S.

Hmm. This is sort of a tough question. I will answer it as best as I can though.

In the first 2/3 of the 19th century, slavery wasn't allowed in the northern states. This started because it was hard to grow cotton in the north. But, over time, the Northeast opposed slavery on moral grounds as well. This was cemented with the "Missouri Compromise". Though this sets the line well south of New England, it does give some parameters to where slavery is allowed.

The time in between the Civil War and 1960 are confusing so I won't get too deeply into this. In 1960s the party's ideologies were becoming more formed when Lyndon B. Johnson worked on civil rights laws. Then the Southern Strategy was used to draw in white voters who were like "what?" when Johnson did the civil rights legislation. But, I will say that back then, before the Great Depression, Republicans were the liberal party and Democrats were the conservative party, more or less.

In the 1990s, this became more apparent as ideology became more consistent at the national level. This same climate separation in growing crops such as cotton and tobacco still affects politics around the more densely populated East Coast today.

Even though California has more of a vote blue no matter who mentality than New England states, Democrats still perform very well at the federal level, holding all House districts and almost every Senate seat has a Democrat or Democratic-leaning independent. The fact that there are Republican governors is in part a vestige of the pre-Great-Depression GOP.

This is oversimplifying but this is my best shot.

It is worth noting that New England is not that strongly Democrat. For example -- the governor, state senate, and state house of these states are surprisingly often Republican.

Why does the Democratic Party perform well in New England for federal elections, but not as well in state elections?

Divided government is more common in some states.

Hartford CT and Providence RI are also pretty big cities, I think. And in Vermont, the state that I live in, we have the most successful third party in the United States. And they are to the left of the Democrats. The reason why Dems do well in New England is that we're not so stupid and not so dishonest as those Trumpers in the midwest and in Dixieland. And because of Duverger's Law, if you're gonna resist the power of the GOP, which is becoming a truly evil and fascist party in the U.S., then you normally have to vote Dem.

With Ranked Choice Voting, it's possible that the Dems will lose some elections to independent and third party candidates, but outside of Vermont, that might be risky to voters worried about throwing away their vote.

Not the answer you're looking for? Browse other questions tagged united-states demographics .

5
Why did a trade-union and labour movement not arise in the United States, as it did in other developed countries?
7
How abnormal is Vermont's Democratic lean considering its rurality?
25
Why do such a relatively high percentage of Republicans approve of Bernie Sanders?
4
Why does Trump do (somewhat) well with Native Hawaiians and Pacific Islanders?
3
Is ticket splitting among nonwhite Democratic voters particularly uncommon?
7
Why are Colorado and New Mexico “bluer” than surrounding states?
5
Is splitting states to rebalance the senate really a viable strategy for the Democratic party?
3
Why did South Texas shift towards the Republicans?