What is the Chief Justice's role regarding Senator's written questions in an impeachment trial?

Its been explained that the Senators in attendance at an impeachment trial must remain silent, but may submit written questions. Can someone explain the process these written questions go through?

For example, can the questions be objected to as in a courtroom trial? Does the Chief Justice have any role in selecting and/or prioritizing the written questions submitted by the Senators?

Any references to relevant rules, laws, or constitutional provisions would be appreciated.

Any references to relevant rules, laws, or constitutional provisions would be appreciated.

XIX. If a Senator wishes a question to be put to a witness, or to a manager, or to counsel of the person impeached, or to offer a motion or order (except a motion to adjourn), it shall be reduced to writing, and put by the Presiding Officer. The parties or their counsel may interpose objections to witnesses answering questions propounded at the request of any Senator and the merits of any such objection may be argued by the parties or their counsel. Ruling on any such objection shall be made as provided in Rule VII. It shall not be in order for any Senator to engage in colloquy. [Emboldening added.]

For example, can the questions be objected to as in a courtroom trial?

Does the Chief Justice have any role in selecting and/or prioritizing the written questions submitted by the Senators?

No. Questions are given to either the majority or minority leader. They will make those choices. Explained further below.

Its been explained that the Senators in attendance at an impeachment trial must remain silent, but may submit written questions. Can someone explain the process these written questions go through?

The precedent for impeachment trials is normally the Procedure and Guidelines for Impeachment Trials in the United States Senate, above; however, that resource is silent on the question. The following reference will be used as a source for answering this question.

There were approximately 106 questions asked, by Senators, during the impeachment trial of Bill Clinton. The questions were propounded by Mr. Lott and Mr. Daschle for the majority and minority, respectively, on behalf of the Senators asking the questions.

Mr. LOTT. This afternoon, the Senate will begin the question-and-answer period for not to exceed 16 hours, as provided in Senate Resolution 16. I have consulted several times about this procedure with Senator DASCHLE and others, and we have determined that the majority will begin the questioning process with the first question, and we will then alternate back and forth.

As I noted yesterday, this has not been done in quite a while, so we will just have to go forward in a way that we feel is fair and comfortable. We ask that you give the benefit of the doubt to us in how we send the questions up to the Chief Justice. Senator DASCHLE and I will try to make sure that the time stays pretty close to even as we go through the day. Of course, the Chief Justice, I am sure, will make sure the deliberations and the answers are fair. We hope the answers will be succinct and that they will respond to the questions.

Before the start of the question-and-answer period the Senators were provide with question cards. 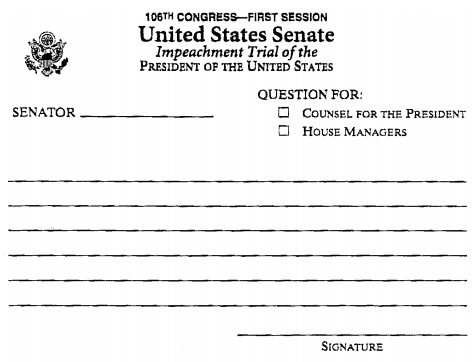 The exchange for the first two questions (the questions are emphasized, answers elided):

Mr. LOTT. (continued from above)

I do have the first question prepared to send to the Chief Justice, but I thought perhaps he has some further business he might want to address before I do that.
The CHIEF JUSTICE. Yes. I would like to advise counsel on both sides that the Chair will operate on a rebuttable presumption that each question can be fully and fairly answered in 5 minutes or less.
[Laughter.]
Mr. LOTT. Mr. Chief Justice, I do send the first question to the desk.
The CHIEF JUSTICE. Senators ALLARD, BUNNING, COVERDELL and CRAIG ask the House managers:
Is it the opinion of the House Managers that the President’s defense team, in the presentation, mischaracterized any factual or legal issue in this case? If so, please explain.
Mr. Manager BRYANT. Mr. Chief Justice, [...]

Mr. DASCHLE. Mr. Chief Justice.
The CHIEF JUSTICE. I recognize the minority leader.
Mr. DASCHLE. Can I inquire as to the length of time that response took.
The CHIEF JUSTICE. Approximately 9 minutes.
Senator SARBANES asks:
Would you please comment on any of the legal or factual assertions made by the managers in their response to the previous question from Senators ALLARD, BUNNING, COVERDELL, and CRAIG?
Mr. Counsel RUFF. Thank you, Mr. Chief Justice. [...]

This back-and-forth proceeded until all questions were answered.

3
Why is Senator Paul's question believed to have been about the identity of the whistleblower?