Between 1984 and 1994 US Supreme Court filings almost doubled but arguments nearly halved. Why?

US Supreme Court Chief Justice John Roberts has released his end of the year message for 2019, and the Appendix is a brief summary of the "workload of the courts".

I noticed that the plots suggest that while the Supreme Court cases filed almost doubled between 1984 and 1994, the cases argued there nearly halved.

Is this a reflection of any major changes in the manor that the court handled their caseload? If so, were the changes procedural, cultural (if a court can have a culture) or something else? 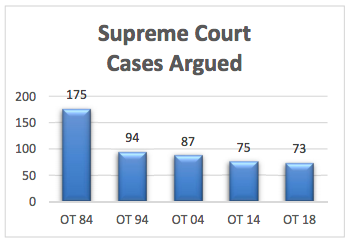 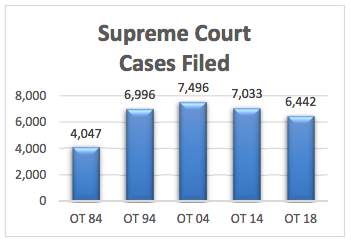 Between 1984 and 1994 US Supreme Court filings almost doubled but arguments nearly halved. Why?
Is this a reflection of any major changes in the manor that the court handled their caseload? If so, were the changes procedural, cultural (if a court can have a culture) or something else?

There were several changes, thus some of each of procedural, cultural [and] something else.

In recent years, the United States Supreme Court has decided fewer cases than at any other time in its recent history. Scholars and practitioners alike have criticized the drop in the Court’s plenary docket. Some even believe that the Court has reneged on its duty to clarify and unify the law. A host of studies examine potential reasons for the Court’s change in docket size, but few rely on an empirical analysis of this change and no study examines the correlation between ideological homogeneity and docket size.

In a comprehensive study, the authors analyze ideological and contextual factors to determine the conditions that are most likely to influence the size of the plenary docket. Drawing on empirical data from every Supreme Court Term between 1940 and 2008, the authors find that both ideological and contextual factors have led to the Court’s declining plenary docket. First, a Court composed of Justices who share largely the same world view is likely to hear forty-two more cases per Term than an ideologically fractured Court. Second, internal and external mechanisms, such as membership change and mandatory jurisdiction, are also important. Congress’s decision to remove much of the Court’s mandatory appellate jurisdiction is associated with the Court deciding roughly fifty-four fewer cases per Term. In short, the data suggest that ideology and context have led to a Supreme Court that decides fewer cases. [Emboldening added.]

The Court’s docket is not likely to increase significantly in the near future. Unless Congress expands the Court’s mandatory appellate jurisdiction or the President makes a series of unconstrained nominations to the Court that increase its ideological homogeneity, the size of the Court’s docket will remain relatively small compared to the past. Because the Court’s case selection process is an important aspect of the development of the law, this Article provides the basis for further normative and empirical evaluations of the Court’s plenary docket.

[...], Clement said: “The explanation which I think has the most explanatory force is that there is a sense in which the Court’s docket, particularly in the statutory area, is a kind of time-lag reflection of Congress’s activity.” Adding that the lag between a new congressional act and Supreme Court litigation over it is typically about 10 years, he said: “Congress 10 years ago was not passing as much new, landmark legislation as they were before.”

This chart of enacted laws, by each Congress with a 5-Congress (or 10-year) centered moving average, is based on Statistics and Historical Comparison and shows the decrease in laws enacted. 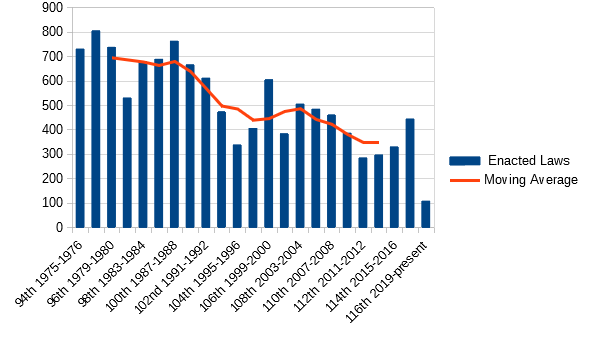 The caseload peaked in 2006. The decrease in caseload may be the result of fewer disagreements among the circuit courts. One basis for appeal to the Supreme court is a difference with another circuit court. Without that disagreement, it may not be worthwhile to file an appeal. 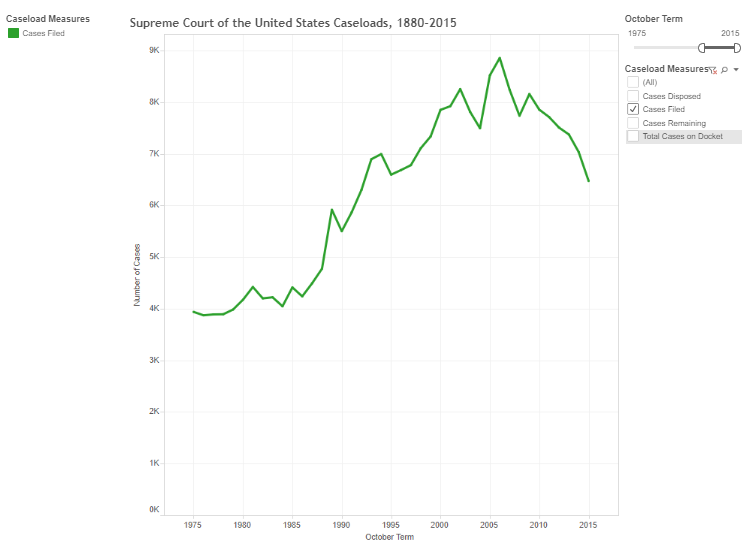 8
Why Is The U.S. Supreme Court Reviewing So Few Cases On The Merits?