Why does Russia have so little / no formal recognition of animal suffering or sentience?

According to this Wikipedia map, Russia appears in the following category when it comes to "World laws pertaining to animal sentience":

No recognition of animal sentience or suffering

This is somewhat strange since virtually all European countries have at least reached "Formal recognition of animal suffering".

World Animal Protection provides more details about this and it mostly boils down to: there is legislation with partial application or not at all when it comes to animal protection aspects (animal suffering, wild animals protection etc.).

Question: Why does Russia have so little / no formal recognition of animal suffering or sentience?

I would venture a guess that because stray dogs are/were such big problem in Russian cities, so it was hard to even pass legislation against killing them, as reported in Dec 2018:

Russia has banned petting zoos, animal cafes and the killing of stray dogs and cats under a new law submitted eight years ago that dramatically overhauls rules overseeing the treatment of domestic and wild animals.

Stray dogs roam the streets of many Russian cities and towns, and attacks by — and against — the animals have become increasingly frequent. Animal rights activists have called for humane control measures of stray dogs, as vigilantes around the country have shot or administered poison to kill the animals.

“This law covers only one percent of what we’d like to see,” Irina Novozhilova, head of the animal rights group Vita, told the RBC broadcaster. [...]

The law prohibits the killing of stray animals, requiring them to be captured — out of sight of children and recorded on cameras for public access — and placed in shelters instead.

Likewise Russia (or rather the USSR before it) had bit of a tradition with animal experimentation, including in space (Laika etc.) There has been a bit of political football somewhat recently (December 2017) over something like that as well:

As part of the demonstration, broadcast on St Petersburg's Channel 5, scientists in white coats put a dachshund named Nikolas headfirst into a container filled with the oxygen-saturated liquid. [...]

"The liquid gets into the lungs and the animal starts breathing in the liquid," a commentator told the guests.

Although the dog survived the experiment, social media users and animal rights activists were quick to accuse Mr Rogozin of cruelty to animals.

"A Russian deputy PM with colleagues are mistreating the poor dog. Mistreating humans isn't enough for them, they are not letting dogs live," a popular blogger, who is often critical of the Russian authorities, said in a widely-shared tweet. [...]

There's a survey (albeit not of great quality) comparing public opinion in BRIC countries on such matters to that of the US. There isn't actually a lot of difference in that regard. 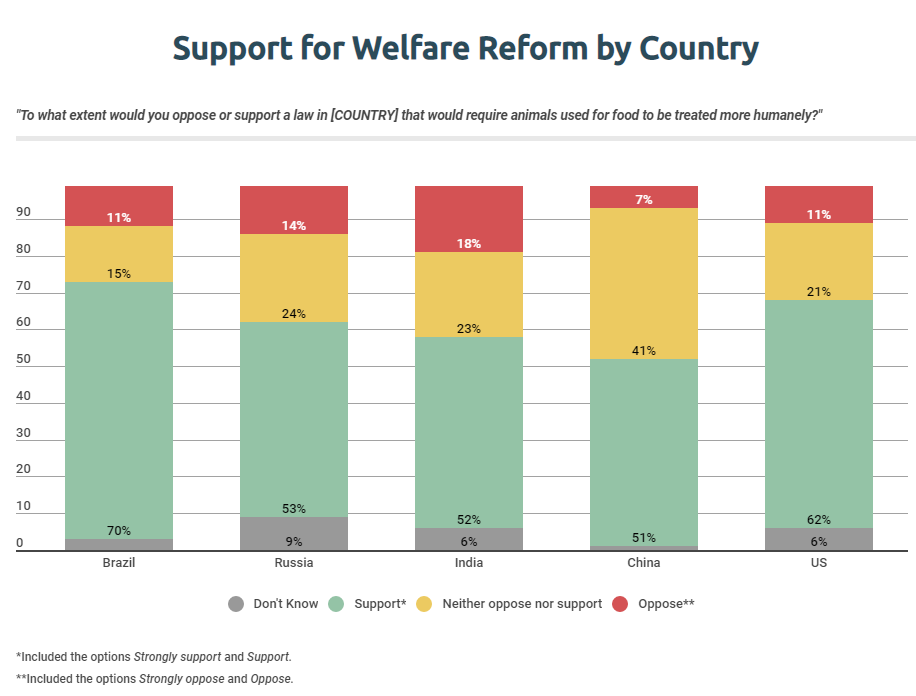 So differences seem mostly explained by political and legislative peculiarities rather than big differences in public attitudes.

But Russia did get low marks for animal protection laws in general (note that this was prior to the recently enacted legislation), e.g.:

For some (BRICS) contrast, China got an E, Brazil and India a C, and South Africa a D.

Another (2013) publication noted (regarding the same survey) that

A global review of animal protection legislation carried out by the World Society for the Protection of Animals (WSPA) reveals that Russia lags behind many countries, having no legislation for fifteen of the sixteen areas researched.

Also, formally recognizing animal sentience in law is somewhat of a new thing; the TFEU was amended for example in 2009 in this respect (by the Lisbon Treaty). And Russia has not been on very good terms with the EU since then, so appearing to copy western liberal ideas was probably not seen favorably domestically.

This map seems to correlate very well with (per capita) GDP. If you account for that, Russia scores slightly lower than other countries of similar wealth but it doesn't look like a big outlier. It just happens to be big in land area and therefore stands out.

Not the answer you're looking for? Browse other questions tagged russian-federation animal-rights .