Why is Senator Paul's question believed to have been about the identity of the whistleblower?

According to this NPR article, the reason Chief Justice Roberts blocked a question by Senator Paul may have been because it identified the whistleblower.

It is believed that Paul's question would have identified the whistleblower whose complaint sparked the House's impeachment investigation of Trump.

What makes people think that the question identified the whistleblower? Can't the Chief Justice block any question he wants? 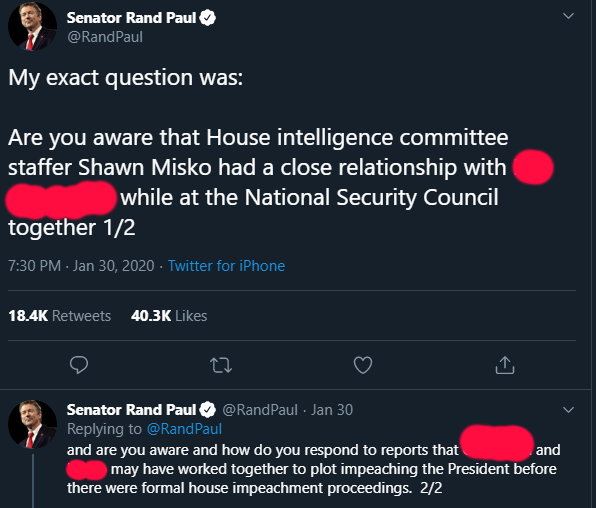 Can't the Chief Justice block any question he wants?

This is a different question and it's better addressed in a different answer here. To quote from that answer:

So the presiding officer, in this case Chief Justice Roberts, may rule to block a question. A senator could move to challenge that and ask for a formal vote. I don't know, however, how that would work exactly as reasonably you'd have to know the question to vote on it.

What makes people think that the question identified the whistleblower?

Because everyone in Congress and most people in Washington DC know who is the whistleblower. They just pretend not to know.

Everyone who wants to know the name of the whistleblower, can know within 5 minutes. The name has been mentioned on large sites many times. A simple search for "Trump whistleblower identity" will identify him in the short snippets on the search page. Senator Paul has retweeted a tweet with the name back in 2019 already, so searching for that is good enough as well.

That's why everyone knows which name should not be mentioned.

Not the answer you're looking for? Browse other questions tagged united-states congress trump-impeachment .

4
What is the Chief Justice's role regarding Senator's written questions in an impeachment trial?

39
Can the current President of the United States block the transfer of their office to the next elected president?
55
Why do members of Congress in committee hearings ask witnesses the same question multiple times?
5
Would switching to a proportionate House require a constitutional amendment?
26
Why it is a big deal whether or not Adam Schiff talked to the whistleblower?
34
Why does the media continue to hide the identity of the Trump-Ukraine whistle blower when they have already been outed?
46
Why is it so important who the whistleblower in the Trump-Zelensky phone call is?
46
Why is it ethical for Ambassador Sondland to have been given an ambassadorship for campaign contributions?