Is there a sustained difference in public views on the Israel-Palestine issue between Europe and the US, and if so why?

I found an interesting YouGov poll from 2014: 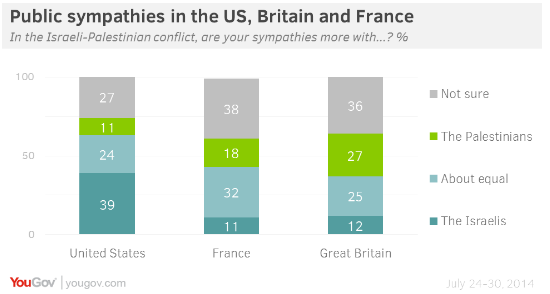 Is this a sustained trend over a longer period of time, echoed in other polls? If, so what explains the difference? (I would prefer if the latter issue were also answered from polls if possible, rather than [expert] opinion.)

N.B. A Pew poll some years earlier also suggests a US-Europe difference, but with a wider spread among various European countries: 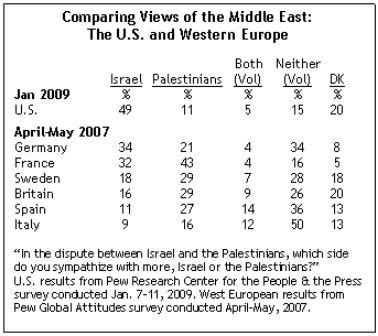 The United States has 12 million Jewish people, almost twice as many as Israel at 6.5 million, the only country to have more Jewish people than Israel. We also have the greatest percentage of Jewish people than any other country save Israel itself, with 3%. The next closest country is France at 1%.

That isn't to say that our approval of Israel has remained unchanged. We hit a low of 34% approval of Israel in March of 1979, around the time of the Egypt-Israel peace treaty. We also hit a high of 64% approval three times: early 1991 after the Manhattan assassination of a prominent Israeli-American Rabbi, early 2013 (after Hamas and Fatah show solidarity and the UN orders Israel to remove settlements to comply with the Geneva Convention), and early 2018 (after Syrians shot down an Israeli F16).

As for Europe, most of the EU countries have between 3 and 9% Muslims, compared to only 1% in the USA, giving them much greater exposure to Muslim peoples and cultures.

so people are more informed , and even relate to the pain of the Palestine more (especially in Ireland for example)

Not the answer you're looking for? Browse other questions tagged united-states israel europe palestine public-opinion .

4
Has there been a significant difference in sympathy for Israel between the public in Ireland and in the UK?
1
Is the French public opinion more favorable to Muslims than to Jews?
4
Is there a party in Europe whose supporters show a high degree of sympathy towards Israel?

66
Why does Israel build settlements in Palestine?
23
Why won't Israel just capture Palestine?
32
Why is it important for Israel that Palestine not be connected by land with Jordan?
11
Which Arab countries have explicitly stated they support Trump's peace plan for the Israel-Palestine issue?
4
Has there been a significant difference in sympathy for Israel between the public in Ireland and in the UK?