Are the partial results announced in Iowa consistent with prior polling in the state?

This may be a bit of a surprise, but according to some news sources (CNN, BBC), Buttigieg came in first and Biden fourth with Sanders and Warren 2nd and 3rd, after more than half the votes were counted:

The Iowa Democratic Party said results from 62% of precincts show Mr Buttigieg was ahead on 26.9%, followed by Bernie Sanders on 25.1%.

The whole thing is rather complicated because the Iowa primary seems to resemble a bit the voting system for the Bundestag:

Because Iowa precinct holds not one but two rounds of preference expression, or alignments, caucusgoers' second choices are more important than ever before.

A caucusgoer whose first-choice is viable after the first alignment cannot, however, change their preference, meaning candidates can only gain and not lose votes in the second alignment. [...]

A candidate must break 15% of the vote in a given district to win any delegates from that district at all.

There are also five pledged delegates statewide for party leaders and elected officials, and nine at-large delegates. Those are allocated based on the statewide popular vote, meaning its possible for candidates to win district-level delegates but not statewide delegates.

(The Iowa system showcased with a [rather lengly] chart over here.)

With regard to the 1st preference, after counting slightly more of the votes (65%), other media sources announced that Yang did substantially better (5.5%) and that Sanders overtook Buttigieg... but not after taking into account the 2nd preference and the translation of votes into delegates. The less detailed articles I found/mentioned first apparently only announced these delegate-equivalent results. Below is the "1st preference" in the Iowa primary (insofar), which is fairly different... 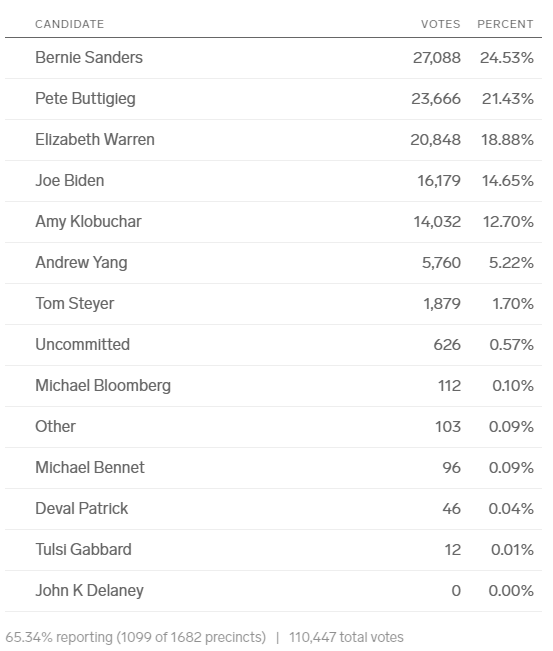 So how far off are these results from the average polling in Iowa in the months preceding the primary? (This is a bit open-ended, because I don't know if pollsters in Iowa tried to emulate/compensate for the complicated voting system over there, or not, when they did their polling. So, answers should try to clarify/specify that too.)

It looks like (most) pollsters don't try/bother to emulate what the Iowa caucus system would produce. At least that's the impression I get from the RCP summary, which also gave Sanders a small lead recently, which is consistent with the "1st preference" results announced in the actual caucus. On the other hand, Buttigieg was in the lead in December, but it's not clear to me if this was due to polls [conducted then] using a different methodology or just a shift in opinion... 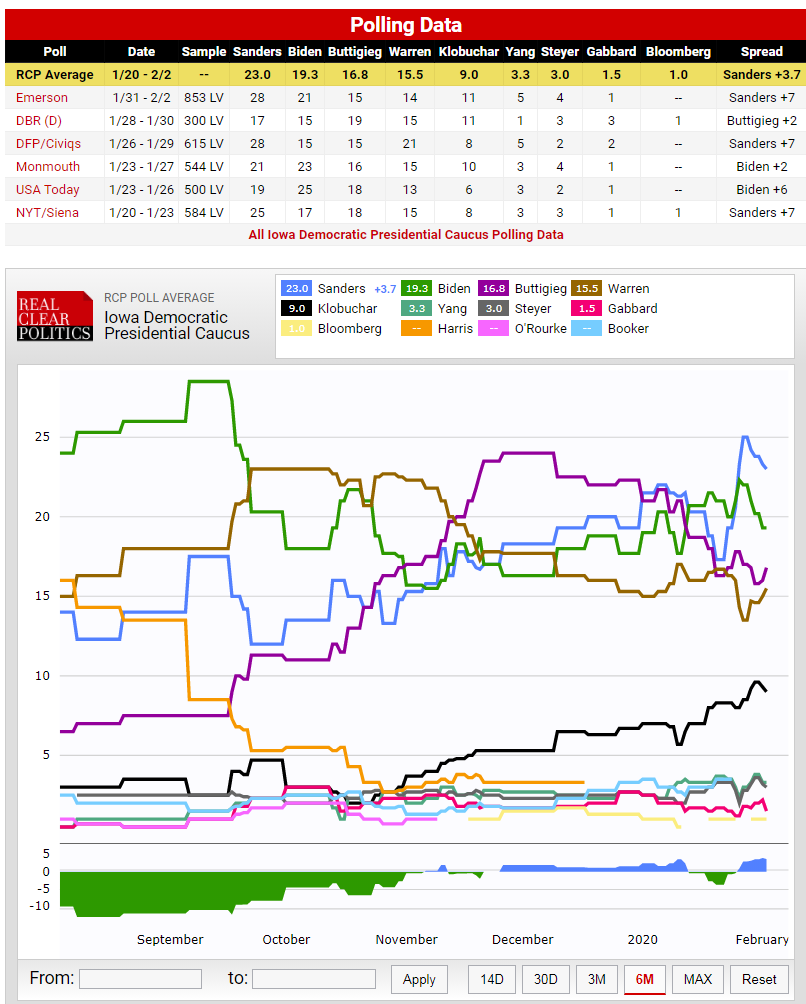 The recent "DBR (D)" poll that gave Buttigieg a lead and which is accessible from the RCP summary by a simple click did ask about the 2nd preference... but the number summarized by RCP from that poll is simply the 1st preference, on which Buttigieg also led in this poll! (This poll only published raw answer data at least in the pdf linked. I see no attempt in there to apply some algorithm to emulate the caucus system's two-round voting to infer delegate-equivalent results.) 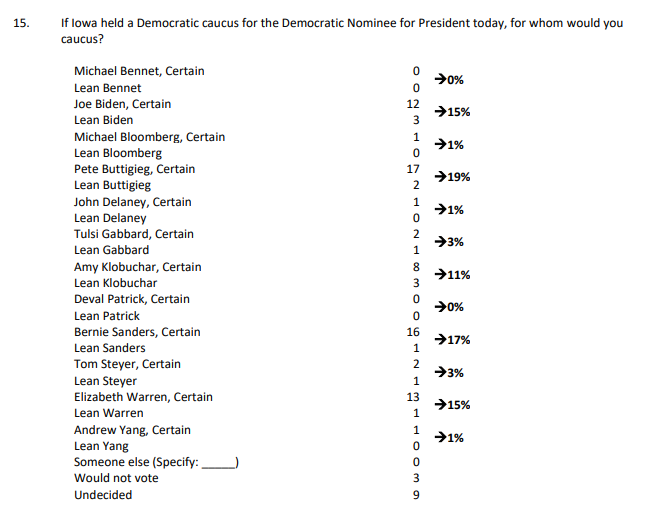 Even from the (late November) CNN poll that gave Buttigieg a large lead (as reported by RCP of +9), RCP has actually reported the "1st choice" again. (The CNN poll pdf also summed 1st and 2nd choices, but that's not what RCP reported from it.)

So at least we know that what RCP has reported/summarized needs to be compared to the "1st preference" in the actual caucus. (Unfortunately, the little "poll average" summary box (saying "Sanders +3.7") that you see immediately above the RCP graph does not get updated if you pick a different time frame in the interactive graph below it...)

It appears that fivethirtyeight applies the same methodology in their reporting, i.e. only the 1st choice is summarized/reported, at least going by that same last poll I mentioned (which fivethirtyeight lists as conducted by "Selzer & Co.", who actually ran it; it's rated A+ by the way.) Below is the fivethirtyeight summary/graph for Iowa. 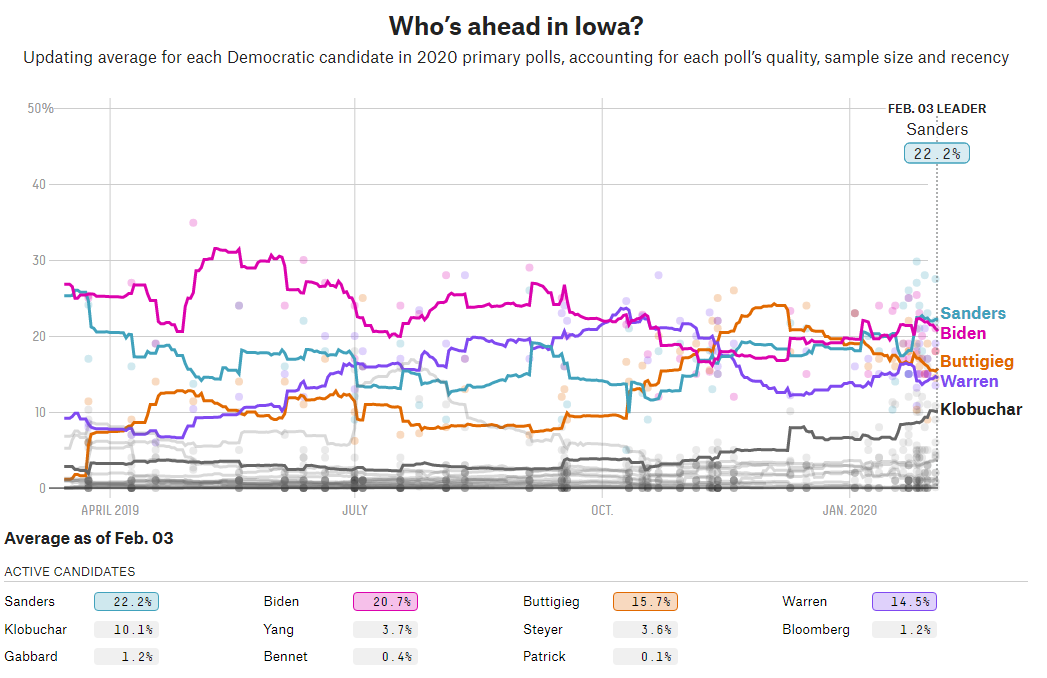 So if there's a surprise in the actual caucus relative to prior polls is that Biden seems to have underperformed even on "1st choice" and that Buttigieg did better than the poll average even in that respect (assuming the partial results reported so far aren't too biased.) On the other hand, these state polls generally had a fairly large (self-reported) margin of error. E.g., the last one I mentioned (CNN/Selzer) had plus-or-minus 4.4.

We can correct for the two-round procedure by summing the published per-precinct popular vote numbers from the first round. This should make the figures comparable to polls. Here are the results of my spreadsheet. 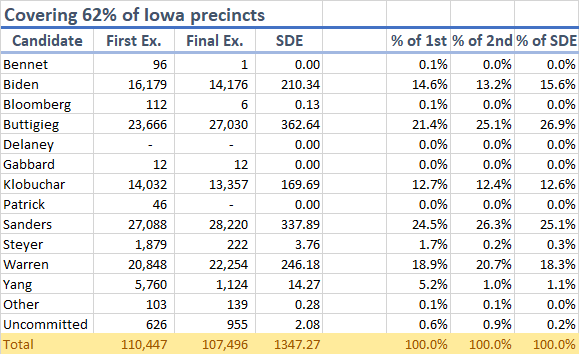 The other front runners all got a boost in the second (final) expression, with Buttigieg getting the most benefit.

Not the answer you're looking for? Browse other questions tagged united-states polling primaries democratic-party .

8
What was the Caucus App supposed to be used for?

5
What is (GOP?) algorithm for proportional Presidential primary delegates?
1
Does the “viability threshold” in a caucus apply only to the 1st preference?
3
Will the current SDE difference between Buttigieg and Sanders translate into delegates?
4
When are Iowa's Democratic district- and state-level delegates (for the presidential contest) completely selected?
3
Absentee Voting in Ohio - What does the “vote capturing machine” do?
1
What is the difference between votes cast at the DNC by states/territories and delegates won in the primaries/caucuses and why is there a disparity?
9
In the event of a Presidential candidate's death after the printing of ballots, would the Electors of certain states be able to vote at all?