How does the math for the Iowa Democratic Caucuses work?

I'm confused by the math used for Iowa caucuses. Here's an example: 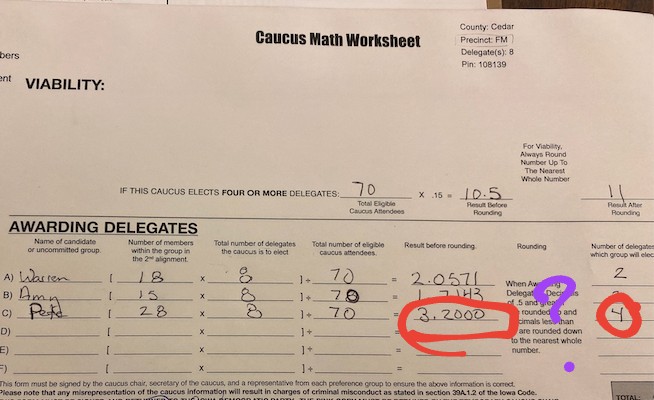 So there were 70 attendees. A total of 8 delegates assigned to the caucus

But after taking into account viability... 9 votes were not viable and I assume those people just left...

Is this really how this is supposed to be done? Is there some site where the specific instructions are given?

According to a training presentation from 2016 (slide 40), when computing viability all fractions are [to be] rounded UP to the next whole number.

Also (slide 47) the viability threshold is not recalculated if some attendees leave; only the initial attendance figure when proceedings opened is used throughout.

The fractions used to award delegates are normally rounded up or down at the 0.5 threshold (slide 51)... 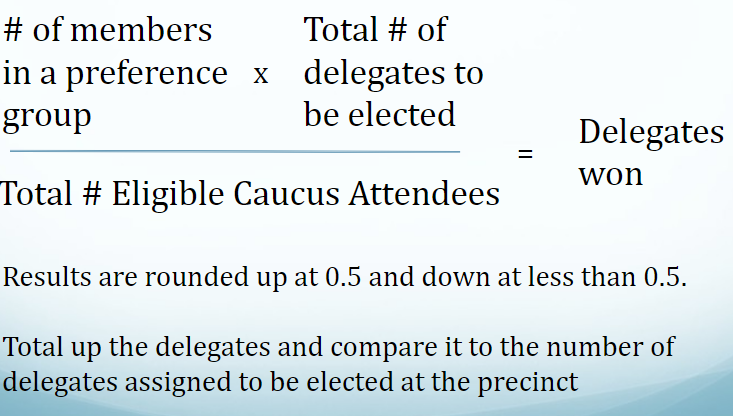 ... but if not all delegates could be allocated this way, then the leftover is awarded to the group with highest decimal below 0.5 (slide 56).

So the calculations from the image you've posted are actually correct according to these rules. The last fraction 3.2 was rounded to 4 because 0.2 is also the highest figure below 0.5 in that column: the first figure has 0.05 (so less than 0.2), while the 2nd figure has 0.7 (which is above 0.5) so it is discarded...

They even show an example (similar to the one you posted) on their next slide:

Note that you can also end up with too many delegates by the initial rounding process. In that case (slide 58) a delegate is subtracted from the group with the lowest decimal above 0.5... as long as it's not a group with a single delegate, i.e. those are excluded from this latter elimination process. 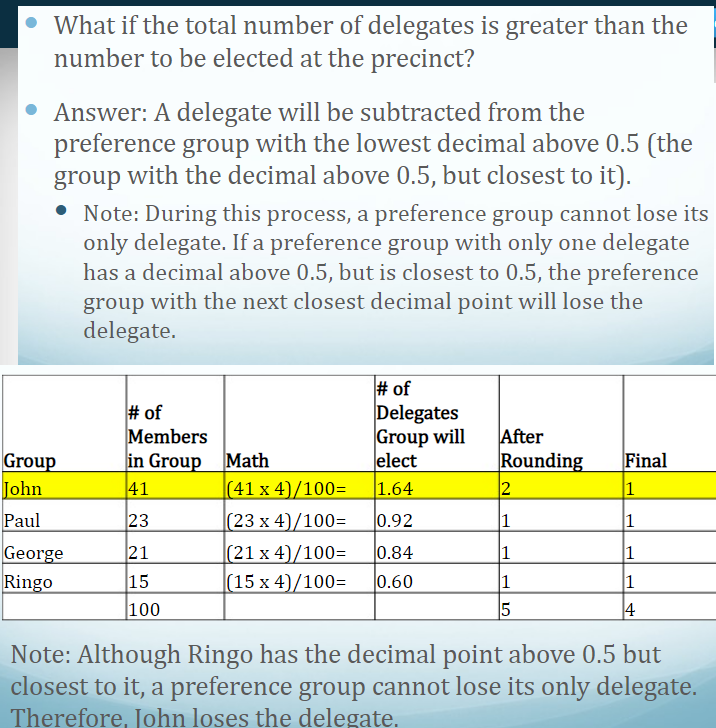 Also (slide 60) if there's a tie as to whom should lose a delegate (between two or more groups), it's decided by a coin toss or drawing names from a hat.

I've done it at state and county party conventions before. The whole body gets a representation based the size of the body (or some other set critera), and then breaks up into groups by interest. There's a "viability" threshold set at a certain number of members, and if some of those groups aren't viable, they have to join groups that are. Each group then gets to choose a certain number of members to represent that caucus group at the next higher level (eventually leading to being actual delegates at the DNC or RNC). Those folks you'll see this summer at the DNC in the funny hats next to the sign reading "Iowa" will have been selected from these caucus groups.

If someone doesn't want to join any of those other groups, or has to leave mid-process for some other reason, that doesn't change how many delegates the entire body gets. However, it of course does alter the relative representation of any group they might have joined, but didn't.

It this particular case, it appears that Sanders partisans in particular were rather apt to fail to join any other group if theirs happened to not be viable in their precinct. I saw at least one instance of that happening with Yang and Buttigieg supporters as well though.

Not the answer you're looking for? Browse other questions tagged united-states democratic-party caucus .

18
Why is it so difficult to collect Iowa caucus results as opposed to election results?
3
Will the current SDE difference between Buttigieg and Sanders translate into delegates?

10
How do the Iowa caucuses differ from other elections in voter behavior?
2
How do delegate counts get rounded?
2
Are caucuses less democratic than primaries?
2
Why was Mitt Romney initially incorrectly reported as the winner of the GOP Iowa caucus in 2012?
1
Does the "viability threshold" in a caucus apply only to the 1st preference?
0
Where were the Iowa "satellite caucuses" located?
6
Has some candidate won the Democratic ticket without winning either Iowa or New Hampshire?
8
How are Presidential candidates, who run for the party ticket in Primaries and Caucuses, shortlisted?