Was the impeachment of Donald Trump supported or opposed by the general public outside the United States?

If you look at polls within the United States it's quite clear that impeachment views run straight down party lines. The very few independents we have left seem to be more pro impeachment then against it, but ultimately it's clear that party politics are largely deciding views on impeachment.

I'm curious how independent outsiders who don't have quite a political bias towards one of our parties view the whole thing. Do non-US individuals oppose or support the impeachment?

I am looking for facts, not personal opinion. As such I'd prefer links to a study, poll, or some other objective measure of fact. Ideally I'd like to see information on what multiple different regions of the world think about impeachment, but I don't want to make a request so specific as to make it impossible to find useful data, so I'll accept any poll or similar results about a specific region's opinion, if that is all that can be found.

Although it doesn't specifically address the issue of impeachment, this report by Pew Research Center about their survey of 32 countries, and published 8 January 2020, might provide some insight. Basically, confidence in

As has been the case throughout his presidency, U.S. President Donald Trump receives largely negative reviews from publics around the world. Across 32 countries surveyed by Pew Research Center, a median of 64% say they do not have confidence in Trump to do the right thing in world affairs, while just 29% express confidence in the American leader.

Anti-Trump sentiments are especially common in Western Europe: Roughly three-in-four or more lack confidence in Trump in Germany, Sweden, France, Spain and the Netherlands. He also gets especially poor reviews in Mexico, where 89% do not have confidence in him. 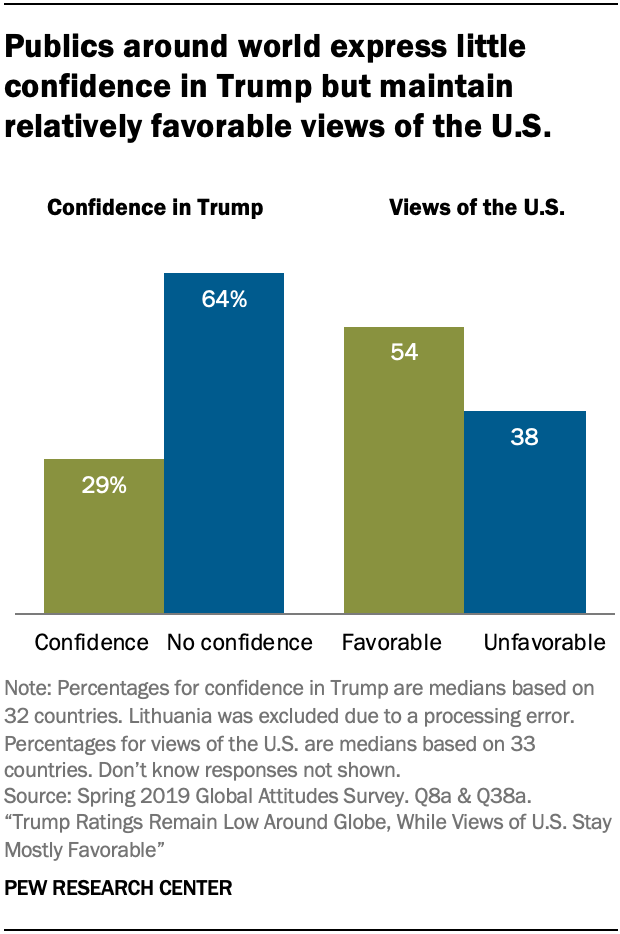 The specific issue of American impeachment proceedings is such an extraordinarily-niche topic -- akin to asking a random handful of Americans for their opinion on Jacob Zuma's corruption trial -- that I'd be surprised if there was any data better than this.

Conducting polls is costly, so I don't see why anyone would spend money outside the US to find out public opinion on a fairly obscure US politico-legal matter... (as opposed to opinions about Trump's foreign policy, which does get polled, see the Pew survey in the other answer.) The best you can probably hope for is some foreign media roundup which often end up asking some local expert[s] on their opinion...

there was little immediate international reaction to Trump's impeachment for a U.S. leader who has already upended the U.S.'s relationship with much of the world by casting doubt on longstanding alliances from the G-7 to NATO, pulled out of global climate and nuclear accords and generally treated foes like friends, and vice versa.

On the day of the vote, Iran's state media noted it was happening and that the debate was sharply drawn along politically partisan lines, but has not commented since. [...]

There was no official mention of it in North Korea or China, where state media often look for opportunities to bash American officials and leaders. However, the Hong Kong-based South China Morning Post noted Beijing officials may be concerned impeachment will be a distraction from Trump's China trade talks. [...]

"Brazil is deeply polarized and seized with the daily dramas of their own president," said Robert Muggah, co-founder of the Igarapé Institute, a Brazil-based think tank. "A majority of Brazilians shrug their shoulders when asked about Trump's impeachment." [...]

There was also no word from Saudi Arabia, where the government is close to Trump. [...]

There were few media hot takes out of India or South Korea or other places where Trump is closely watched. Most newspapers from Mexico to Spain ran straightforward news stories on the vote.

Peter Bayer, a German politician who is a close associate of German Chancellor Angela Merkel and a member of her ruling Christian Democratic Union party, said that Germans have been closely watching the impeachment proceedings in Washington.

"The U.S. is our most important friend and ally outside Europe," he said.

But Michael Wohlgemuth, a German-born expert on European political affairs at the Foundation for Economic Governance and Public Law in nearby Lichtenstein, said he believes most Germans will be happy to see Trump impeached.

"Trump is most unpopular in Germany. Only 10% of Germans trust the American president – compared to 35% who actually trust (Russia's) Vladimir Putin. This is no expression of engrained anti-Americanism, but a most damning verdict on the person himself. After all, 86% of Germans used to trust in the leadership of President Obama."

In Moscow, President Putin briefly touched on Trump's impeachment during his annual marathon end-of-year news conference, saying that the impeachment was far-fetched and "just the continuation of the domestic political strife." Putin predicted that the Senate would reject it. Russia's leader has previously made similar remarks.

One place where Trump's impeachment could be expected to resonate strongly is Israel, where Prime Minister Benjamin Netanyahu is fighting his own battle for political survival after two inconclusive elections and indictment for bribery, fraud and breach of trust.

I can't speak to public opinion, but here is the published opinion of Switzerland's leading conservative newspaper:

The acquittal thus creates a disastrous precedent. A president who clearly lacks respect for democratic practices and institutional control is encouraged in his belief that he can get away with everything. It is not apparent that his party would slow him down in another case. Not just Trump will know how to use this. It is also an invitation to future presidents to abuse their power.

Not the answer you're looking for? Browse other questions tagged united-states trump-impeachment public-opinion .

1
Has Donald Trump given a public opinion about the Electoral College?
32
Why did people still chant “Lock her up” at Trump rallies in 2019?
6
Trump Impeachment tallies in the House?
10
When was the investigation into Donald Trump and Russian collaboration first made public and by who?
1
Is there a timeline of the impeachment proceedings against President Trump?
5
Do Lev Parnas and Igor Fruman have anything to do with the Trump impeachment?
35
Why are the Democrats & Republicans so homogeneous in their opinions of impeaching Trump?
1
What is the purpose of the questioning phase of the Trump impeachment trial?
6
How does polling work in the United States?