Will the current SDE difference between Buttigieg and Sanders translate into delegates?

I'm looking at NYT's Iowa caucus results table (paywall, but you can still see the table in the back), as of right now:

My main question: Sanders and Buttigieg have the same number of pledged delegates, despite Buttigieg having a slightly higher SDE fraction. Is this just due to rounding? What needs to happen - in terms of other precinct results - in order for Buttigieg's SDE advantage to translate into a delegate advantage?

Secondary question: I'm guessing this all has to do with how Biden has a lower pledged/SDE ratio than the front-runners. Why is this the case?

The current estimate by The Green Papers, with 97% reporting, is as follows:

In order to get any delegates, a candidate needs at least 15% of the vote, either in the Congressional district and/or statewide. Because Biden failed to reach this 15% threshold in district 2, he will not get any delegates from that district.

Update: the Iowa Democratic party has now officially called the SDE race in Buttigieg's favor 14:12. These results are still not officially "certified" though, meaning they can still be contested for a recanvass/recount. (And if anybody is curious: Buttigieg won an extra 2.774 SDEs; that's little bit less than Clinton's margin over Sanders in 2016 of 4 SDEs; I only found that latter number rounded.)

Like I said in my earlier comment, there have been no official assignments (those would appear on https://results.thecaucuses.org/) of pledged delegates yet. That NYT page/article surely had some estimates. In the meantime, the NYT which has a live page with their model has updated it to include some pledged delegates estimated for Biden as well. Unlike Joe's answer (based on The Green Pages), NYT are calling it equal for Sanders and Buttigieg (13 pledged delegates each, but with slightly higher probability of Buttigieg comping up ahead 56:44), after the same 97% of the results... 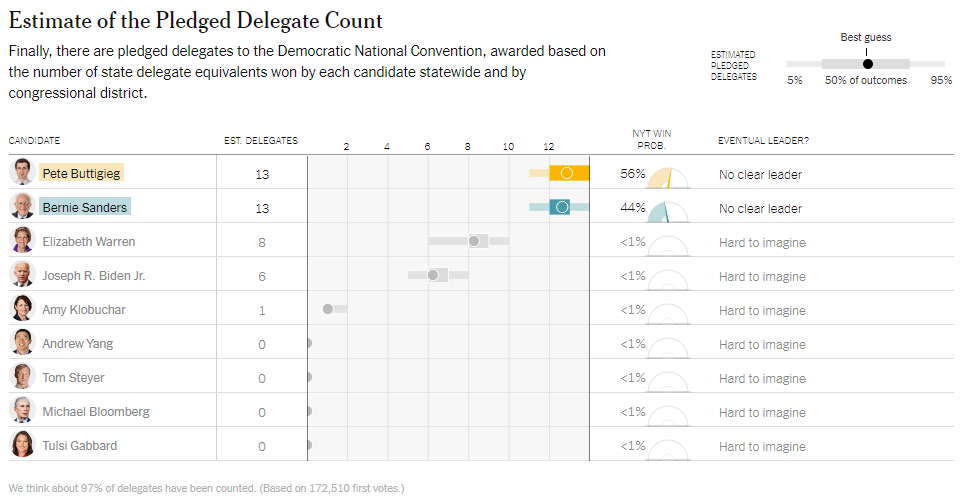 NYT however has also called the other race indicators (first and final alignment) for Sanders though now, with very high probability.

As both NYT and 538 explain, the turnaround for Sanders was due to satellite caucuses.

So far, Sanders has gotten 21.855 state delegate equivalents out of the satellite caucus sites, and Buttigieg has gotten 1.196.

Until last night, each new batch of results was barely changing the candidates’ vote shares, and we (and pretty much everyone else) assumed that the remaining precincts in Iowa were representative of the rest of the state. But the satellite caucuses were clearly not representative, and that is why Sanders now has a shot at being the sole victor in Iowa.

But Buttigieg could still hold on. We are now awaiting the results in just 54 Iowa precincts. About a dozen of those are satellite caucuses, which could be enough to put Sanders over the top — but the remainder are regular old caucus sites, where Buttigieg is expected to do well.

Not the answer you're looking for? Browse other questions tagged united-states election democratic-primary caucus .

13
How does the math for the Iowa Democratic Caucuses work?
4
When are Iowa's Democratic district- and state-level delegates (for the presidential contest) completely selected?