While the UK seems to pushing for an FTA with the EU similar to the one between the EU and Canada (or Japan or South Korea), the EU seems to have said no to this immediately on the grounds of geography, that is, the UK is too geographically close to the EU to get such a deal. Could this be elaborated on?

Moreover, I understand the EU-Canada deal does not cover services. Given the size and importance of the UK financial industry, why should the UK be so seemingly relaxed on this front?

There's not really a lot to elaborate on, the UK's location is the key reason why the EU is not willing to grant a Canada style deal. Elaborated here, as a low number of tariffs, and high quotas. There's more in this article on BBC.

Almost all trade agreements include them to some degree, but the EU is demanding particularly strict rules because the UK is a major economy right on its doorstep - therefore a bigger potential competitor than a country like Canada.

Being right on the doorstep makes it cheap to ship products. Anything produced in Canada comes with extra shipping costs and time to get to the EU, therefore the EU can be more generous in its terms because local products will be cheaper and available more readily based on "just in time" manufacturing chains to its consumers. Conversely Britain is closer to large parts of Western Europe than countries on the Eastern borders. Ireland in particular is practically divided from Europe in terms of transportation mechanisms by the UK.

A second point that doesn't seem to get mentioned much is market saturation. This FT article talks about the growth in EU exports to Canada since the trade deal. Even with the geographical difficulties exports are up 11%.

Overall EU exports to Canada rose 11 per cent in 2018 from a year earlier, while imports from Canada rose 7 per cent. Canadian agricultural exports to the EU, however, fell 15 per cent.

The imbalance stems partly from stringent European standards banning antibiotics and growth enhancement technology, Canadian meat industry bodies and farmers told the Financial Times. Farmers must have their methods endorsed by EU-certified veterinarians, who are in short supply in the Canadian west.

There is no such market for growth in relation to the UK. Anyone intending to export to the UK is already doing so, and the dangers in diverging standards is that the UK lowers its standards meaning it will be able to import from wider areas, or produce local goods at a cheaper price. This doesn't factor in any increase in costs based on new tariffs or non-tariff barriers, even simply completing a bucket load of paperwork and queuing to get it checked at the UK border can trim margins that exporters rely on.

I can't really address your final point on Services. Indeed from everything I've read the UK Government seem shockingly complacent over the issue, assuming that London will remain the home of finance across the EU indefinitely no matter what deal is eventually struck. But here's the institute for government's outlook. It notes the lack of a solid position from the British executive.

As part of that the deal, the statement suggests that there should be “enhanced provision” for equivalence findings. These are unlikely to cover the full spectrum of financial services activity

Rather than a formal reason, this may just be indicative of pre-negotiation maneuvering and building up their negotiating bargaining chips. It's already clear the EU won't grant a Norway/Switzerland level of access, at least not unless the UK agrees to the same kind of constraints those 2 operate under. Note that Switzerland is even closer than the UK, so geography by itself is not a show-stopper, although they are both much smaller than the UK.

This is saying you may not even get anything close to Canada's deal and don't you forget it. The idea being that UK is being put on notice that it will need to make concessions if they want something much more favorable than WTO and that making the argument of proximity is not likely to carry much weight - supposedly the opposite giving this statement..

Re. financial services, I know a number of cities and countries have been jealous of London's predominance, Paris foremost. While I doubt that the EU would engage in scorched earth to boost continental financial services, there are also going to be strong regional incentives to take Brexit as an opportunity to strengthen services outside of the UK.

Overall, the UK's negotiating position is rather weak and I suspect seemingly relaxed is more the UK government putting up a brave face than it is any level of confidence in a fully beneficial outcome. The UK as a whole is also in a much weaker position than Canada was - the economy can't afford the 7 years the Canada deal took to pass.

The EU is claiming a Canada-style deal won’t work merely as a negotiating position. From their point of view, the further they start from the UK’s position, the closer the UK will be force to move to their ideal (full regulatory alignment, with ECJ jurisdiction).

The UK is doing exactly the same thing - if they start with an extreme negotiating position, they will get the EU to move closer to their ideal.

The EU has no reason to deny a Canada-style deal (and it’s very likely to be the outcome - a compromise on both sides).

In fact, this is a slide from the EU’s original negotiating position, showing that a Canada-style deal meets the UK’s red lines, and would work for them: 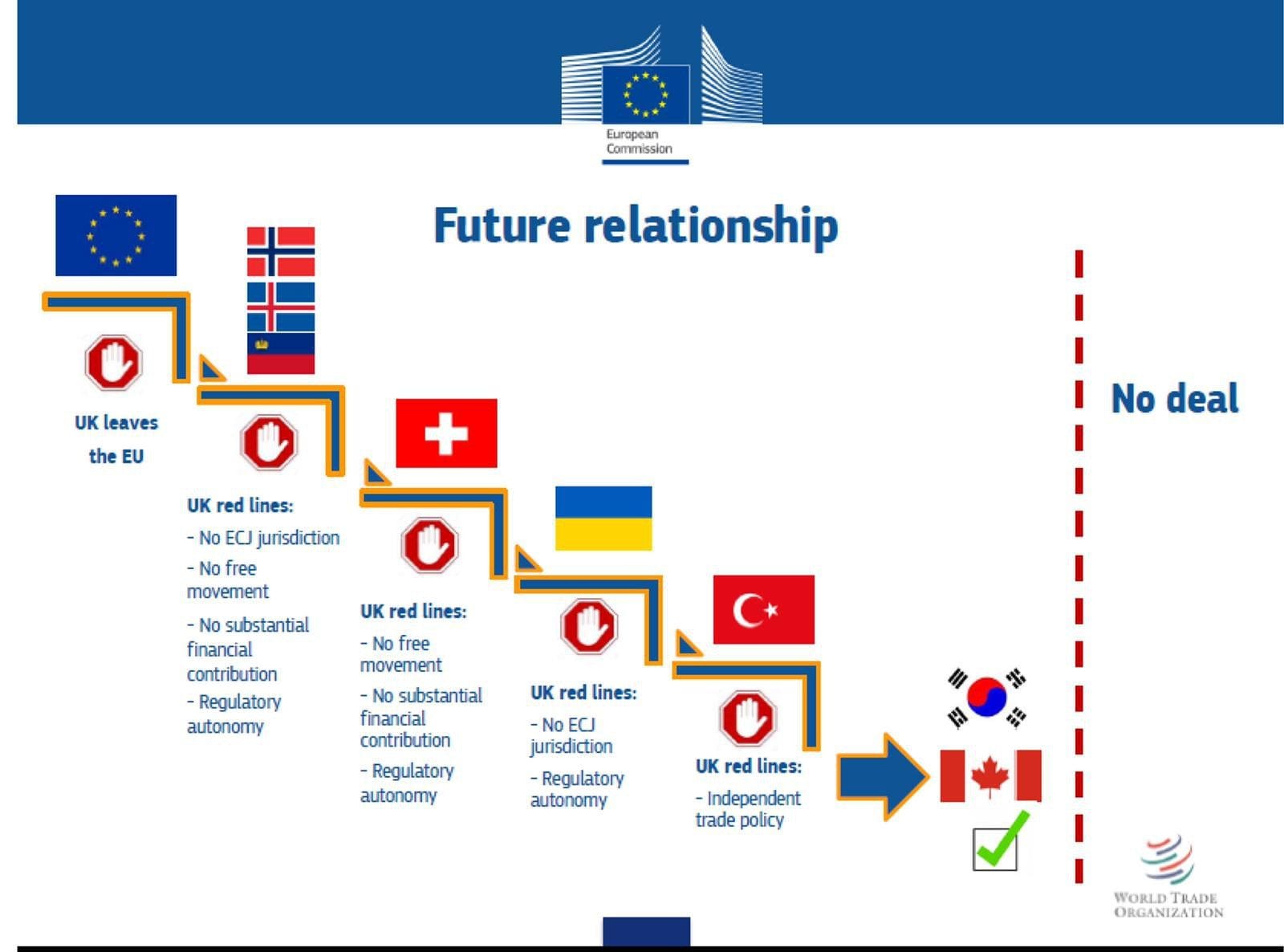 The only reason the EU has moved away from this stance (under the pretence of the UK being too geographically close) is to get themselves a better deal.

The sea separating the EU and the UK is not very wide and there are fast internet links (in fact I get a faster ping to the Netherlands than to London from inside the UK!)

The UK also has the same timezone or only plus/minus an hour or two which makes doing business a lot easier. By the time Canada is starting work Europe is well into the afternoon.

It's much easier to travel between the UK and EU as well. There are regular flights and ferries, and a rail tunnel under the sea.

So the UK is a much greater natural competitor than Canada is.

Since the UK was in the EU until recently it also has regulatory alignment, meaning anything made in the UK is up to EU standards already. While the UK wants to diverge from EU standards for some reason that starting point means it is better placed than Canada to immediately start competing. UK engineers understand EU rules well and are already experienced at building to EU spec, for example.

Even things like the UK mains voltage being compatible with Europe while Canada uses a different one has an effect.

There are companies already operating in both the EU and UK too, so they are well placed to exploit any deal where as Canada/EU international companies will ramp up more slowly.

Note that this is all physical goods, a Canada style wouldn't cover financial services for example.

8
Does staying in the single market post-Brexit mean freedom of movement?
5
British tax havens and the EU post Brexit
4
Is the UK asking for increased influence over the EU post-Brexit?
23
Why did the UK not have any post-EU exit deals agreed prior to June 2016?
2
Do polls indicate support for post-Brexit freer trade?
16
What is preventing the UK and the EU from progressing in the talks on post-Brexit trade?
5
What are UK and EU proposals for post-Brexit musical touring?