How does this picture explain Direct Applicability v. Direct Effect? 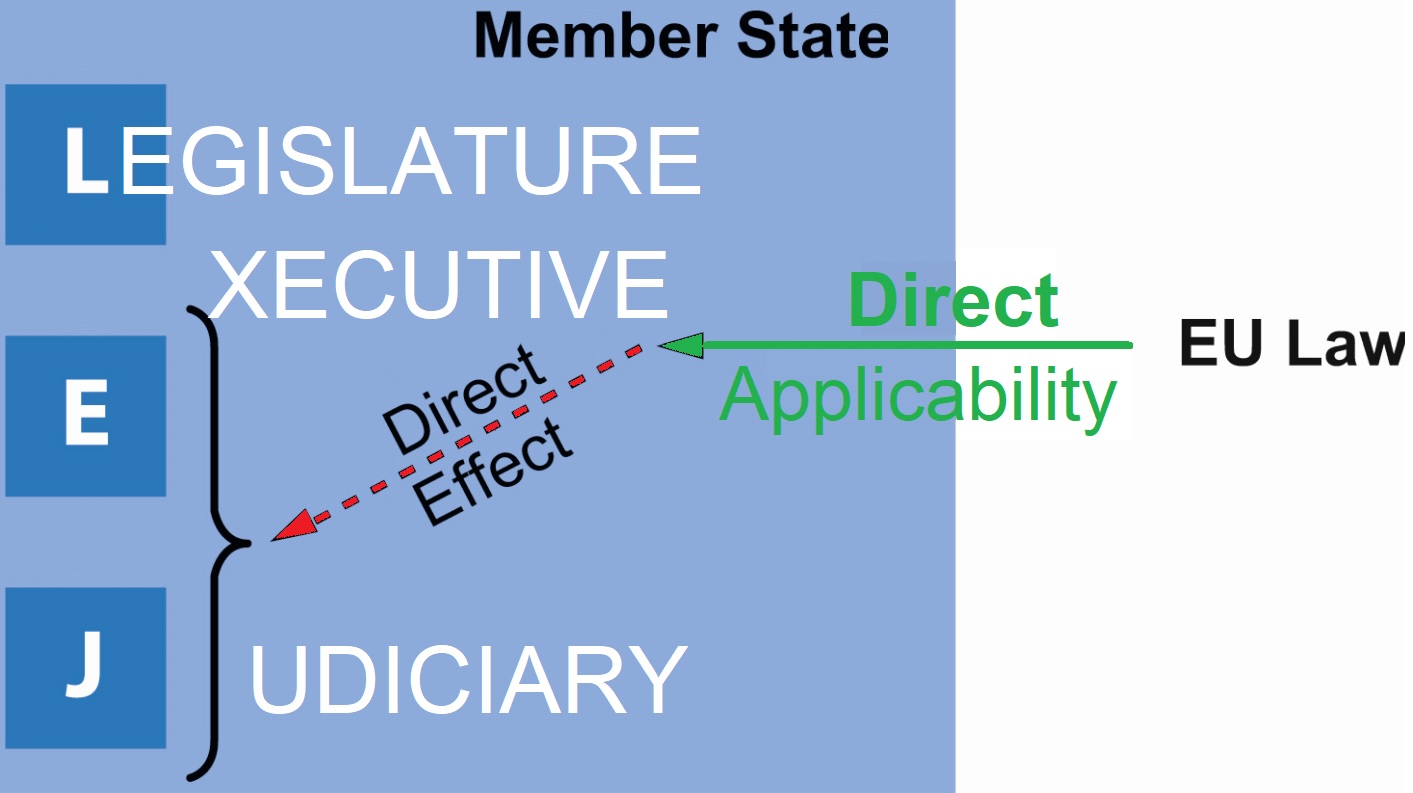 Since Brexit, the EU law terms ‘direct effect’ and ‘direct applicability’ have at times been conflated. However, they have distinct meanings which should be clarified.

Direct effect refers to the ability of EU Member State nationals to enforce rights derived from EU legislation directly in national courts. In other words, if a provision of an EU Treaty, Regulation, or Directive satisfies the requirements to be directly effective, national courts must enforce the rights that such a provision grants. Therefore, there is no need for nationals to go to the Court of Justice of the European Union (CJEU) to plead their cases.

Direct applicability, on the other hand, refers to whether a piece of EU legislation becomes part of a Member State’s national law without the need for any implementing legislation. EU Treaties and Regulations are directly applicable, as they come into force without any action on the part of Member States. Contrastingly, EU Directives are not directly applicable, as Member States must implement national legislation, before a prescribed deadline, in order to give effect to them.

Direct Effect is when an EU citizen goes to the EU's court and changes a law in their own country. This only applies to "regulations, directives, treaty provisions and decisions"(Eurofound) (of the EU) which means that laws are changing as an effect of EU provisions that are directly applicable under EU law. So what your diagram is showing is that a direct effect is derived from a Direct Application of EU law and that a direct effect can override a nations Legislature and Judiciary because those are the branches of government that create and interpret EU law.

Some EU laws go further and have direct effect, meaning that the EU law is incorporated into state-level law just as thought the member state legislatures had all passed it themselves. This effectively bypasses the member state legislatures and goes directly to the executive and judicial branches for implementation and suits. That is the red arrow.

It's not a great or clear graphic, but such is life...

15
How would one explain the E.U. to a 5 year-old?
1
Why hasn't France exited the EU, when it loathes the EU's enlargement?
4
Why were the Treaty of Rome's travaux préparatoires not available for thirty years?
0
Simple explanation needed about EU's decisional and normative supranationalism
1
How do export restrictions help domestic market and national production?
4
Why wasn't the supremacy of EU law codified?
2
What's the function of Non-addressed Decisions, when Directives already existed?
0
Why doesn't "(unimplemented) directive may never directly prohibit private party actions" mean no HDE in civil disputes on legality of State actions?
0
Direct Applicability v. Direct Effect
1
Why does EU have 4 different legislations prohibiting discrimination on grounds of nationality?