How can we objectively measure the perception of truthfulness of different governments?

Is there a way to objectively measure or compare how much people believe different governments?

For example, people have accused China of a propaganda campaign to cover up the origins of COVID-19. Another dictatorial regime, Iran, seems to be among the countries hit hardest by the outbreak. On the other hand, North Korea, reports zero known cases of infection.

If one were to ask about non-governmental sources of information, we can point to something like mediabiasfactcheck and other fact-checkers. But those don't exist for governments.

Is there a way to measure and objectively compare how much "the rest of the world" believes the information coming out of the government of any given country?

This has been explored by Berens et al. [1], from the Reputation Institute, the publishers of the annual RepTrak country reputation rankings. In their chapter in the International Place Branding Yearbook 2011, they provide an overview of their methodology, which seeks to measure a country's reputation in much the same way that one might measure the reputation of an individual or a company.

They argue that this reputation is linked intrinsically to the overall international trust of a country, something which is backed up by Klewes & Wreschniok [2], which states that the link between reputation and trust is "fundamental and indispensable", arguing that " trust is based on the experience that an agent has fulfilled our expectations in the past."

They list 11 different attributes, which fit into three different dimensions. These are:

The testing methodology consisted of a large random sample (n=26,000) of consumers in the G8 countries, combined with an additional sample (n=19,000) from the country in question drawn from its own citizens. Responses were adjusted to take into account general per-country bias - for example, respondents from Greece generally will have a good opinion of Cyprus.

A further dimension which was measured was "Supportive Behaviors". This measured the willingness of consumers to visit, live in, invest in, work in, and buy products from the country.

In conclusion then, while the study in question is conducted by surveying populations, it seems possible that a similar study could be conducted which measures at least some of these criteria objectively. Certainly, factors such as "willingness to invest" and "technological advancement" could be measured using economic data. However, it would seem that the best way to measure the reputation of a country will probably be to survey the opinions of global respondents through large-scale polling, as the factors that the study found had the most effect on a country's reputation were attributes such as "Offers an appealing lifestyle", "Is a responsible participant in the global community", and "Is a beautiful country", which would seem to be more abstract factors.

With the regard to the updated question, which is now squarely about perceptions-only, I also have to say that while using country "rep" as a proxy (as suggested in CDJB's answer), there are sometimes caveats.

Consider for example how the US is perceived/rated as a country in the world vs how Trump's governments/administration is perceived: 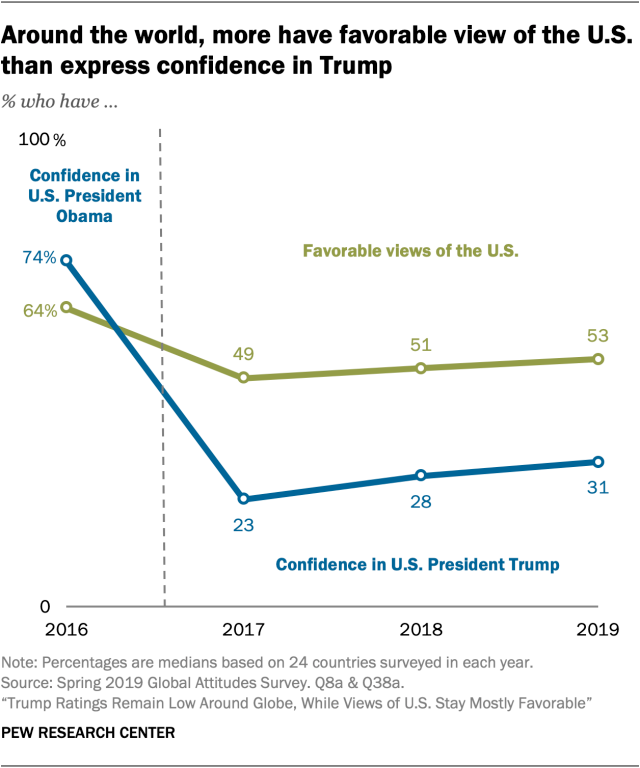 This question was technically about trust in what they'd do rather than "what they say", but I bet that Trump isn't perceived as very truthful in Europe either...

On top of that, there are 2nd order effects to worry about, in which beliefs about others' actual beliefs or statements come into play, e.g. Germans rate the climate-change awareness of Americans and Chinese lower than it actually is.

74% of German respondents on the Special Eurobarometer 459 (2017) see climate change as a “very serious problem” and further 16%as “fairly serious.” Besides the EU, the US and China are said to be key player in international climate politics,while all three are one of the world-largest emitters of carbon dioxide (CO2). China is moreover the largest developing country, and also one of the greatest emerging economies (Schreurs, 2008). According to surveys on climate change awareness in the US and China, 16% of both nations reply to be “very worried” about climate change, 39% of the Americans and 64% of the Chinese are “somewhat” worried (Leiserowith, Smith, &Marlon, 2010; Wang, 2017). In sum, the public climate change awareness in China and Germany is on a high level, while US Americans are much less concerned on average.

German respondents believe that almost 30% of Germans are “concerned” or “very concerned” about climate change. Compared thereto, German respondents assessed only about 6% of people in the US and even less than 5% of Chinese citizens as being concerned. Differences are statistically significant. Similar are the findings for assessed knowledge related to climate change: At minimum, around 11% of people in Germany are assessed as having “knowledge” or “a lot knowledge,” but less than 5% of people in the US and China are indicated as having climate change related knowledge (differences statistically significant). Even greater are the perceived differences for climate-friendly behavior: while Germans assess 15% of Germans as behaving “climate friendly” or “very climate-friendly,” they only assess about 2% of the American and Chinese people to do so (differences statistically significant).

So yeah, using the perception of others has some obvious limitations if one's ultimate goal is to assess the actual truthfulness (or beliefs) of the original source.

Not the answer you're looking for? Browse other questions tagged geopolitics propaganda .

1
How was arranging the trade of POW Sgt. Bowe Bergdahl for five detainees possible without “negotiating with terrorists”?
5
How can the impact of changing the Brazilian capital be analyzed?
18
Why do governments still assume that “the more land, the better”?
13
Why did the US force Russia Today to register as a foreign agent? How does it benefit the US?
3
Will a “debt trap” be an effective measure to increase the geopolitical influence of a nation?
2
How is the dispute of EEZ of nations resolved?
1
How will Russia benefit geopolitically from the current chilling of the relation between the EU and the U.S.?
33
How do totalitarian governments communicate fear while also sending the message that they are the best governments?
13
How did the US administration usually refer to COVID-19 before the Chinese foreign ministry started claiming the virus is of US origin?