Why are Central Banks cutting interest rates in response to COVID-19?

Central Banks around the world have cut interest rates in the past few days in response to the COVID-19 pandemic, including the US Federal Reserve (0-0.25%), the Bank of England (0.1%), and the Reserve Bank of Australia (0.25%). Notably, the European Central Bank has not yet cut interest rates further, but this is partly because it is already in the negatives, at -0.5%.

Why are central banks taking this measure in response to this pandemic in particular - i.e. how does this measure lessen the pandemic's economic impact - and what are the impacts on the average consumer of a cut in their country's central bank interest rate in general? 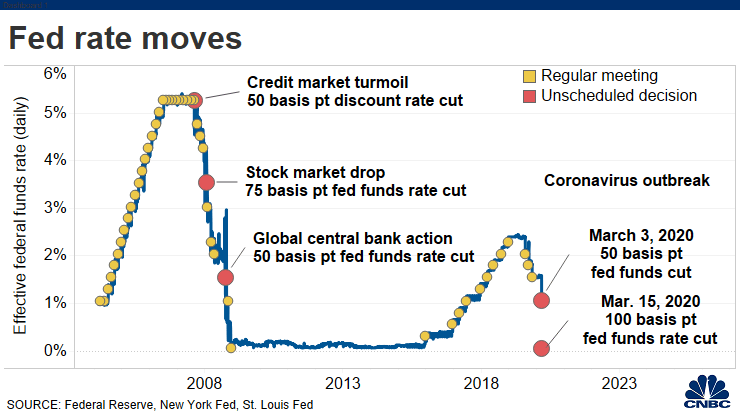 Why is it important? It helps keep banks liquid

The Federal Reserve cannot directly improve how our government is handling the novel coronavirus, and as I’ve written before, it can’t do a lot right now to stimulate the economy through low interest rates. Where the Fed can do a lot is helping to ensure virus-driven problems in the real economy do not turn into problems in the banking system. The ultra-low rate at the discount window is intended to eliminate any hesitation banks might have about borrowing directly from the Fed; in normal conditions, market participants may look at a bank borrowing at the discount window and infer that it has problems and couldn’t find capital anywhere else. But when the rate is this low, borrowing at the discount window just looks like something you do because it is a good deal. With this move, the Fed is helping banks access the liquidity they need in times of extreme financial uncertainty, and therefore helping to ensure the availability of credit to businesses and individuals.

Liquidity is important because banks need money "in the vault" (so to speak) to operate. In times like these, banks are taking a double hit from both lower asset values and people wanting more in cash. If a bank were to run out of liquid cash, it could cause a bank run

A bank run (also known as a run on the bank) occurs when many clients withdraw their money from a bank, because they believe the bank may cease to function in the near future. In other words, it is when, in a fractional-reserve banking system (where banks normally only keep a small proportion of their assets as cash), numerous customers withdraw cash from deposit accounts with a financial institution at the same time because they believe that the financial institution is, or might become, insolvent; they keep the cash or transfer it into other assets, such as government bonds, precious metals or gemstones. When they transfer funds to another institution, it may be characterized as a capital flight. As a bank run progresses, it generates its own momentum: as more people withdraw cash, the likelihood of default increases, triggering further withdrawals. This can destabilize the bank to the point where it runs out of cash and thus faces sudden bankruptcy. To combat a bank run, a bank may limit how much cash each customer may withdraw, suspend withdrawals altogether, or promptly acquire more cash from other banks or from the central bank, besides other measures.

By lowering interest rates the Fed's main goal is to prop up the stock market, and support US corporations.

This is achieved through the following effects: - it encourages credit creation through bank lending, and because most money originates in credit it makes money cheaper and more widely available - it lowers the rates of return on savings and thus encourages savers to spend more freely, which has a twofold effect: it stimulates the economy into the creation of yet more loans, and it tells savers to go elsewhere with their money

Since 2007, the financial crisis, the Fed is essentially a hostage of the stock market in that if now must keep loose monetary policy to further the illusion of perpetual long term stock market gains. This is further evidenced by the tentative and then aborted QT (quantitive tightening) attempt last year.

In the current climate of coronavirus economic meltdown, the lowered interest rate has a further goal: to help protect US corporations who are now overstretched on corporate bonds.

Since 2007, unbeknownst to many, and I think illegal outside the US (?) , corporations - rather than restructure in the wake of the crisis - regularly take advantage of the cheap money stimulus by issuing corporate bonds (essentially borrowing money at low rates) so that their execs can use this to direct the company to purchase its own stock on the stock market. This creates the illusion of rising corporate value while allowing shareholders to receive big dividends and CEOs to pay themselves income related bonuses.

This irresponsible corporate behaviour has brought US corporations to the point that the coronavirus meltdown has slowed earnings below what they need to pay on the corporate bonds. Without direct government support many US corporations will go bust, and corporate bond prices will plummet, which will trigger further meltdown in financial institutions that invest in those assets.

Again, silently under the media radar, just this week the US (?) and ECB created new funds that will be directed to supply money to those institutions buying corporate bonds. To be clear, the way that works is that bondholders who are now nervous about the corporation defaulting might not roll over their bond....rather than reacquiring bonds at the end of their term, or even ending prematurely, they will demand their money from the corps. The corps. don't have it, but new bonds will be sold to the govt backed funds. (Once again the taxpayer bails out the fatcat)

So in summary, the reduced interest rate in combo with new funds, is designed to prop up the stock market and corporations to prevent socioeconomic collapse.

Around the world, central banks lower the rate for the effects of stimulus and stock market prop-up described above. ECB does not lower because the negative interest rate actually makes loans more expensive in some cases as being paid to borrow makes it easier than to lend.

Lowering interest rates brings future consumption to the present, it has zero net effect over the medium to long term. For example you can only buy a home to live in once in your life, if you do it now you won't do it further into the future. The central banks know this and they also know the day of reckoning will eventually arrive, where their pea and thimble trick will no longer work, because the consumer is all but tapped out. So the real is answer is, they lower interest rates because they are going to try and avoid a depression on their watch and hope that it happens to some other schmuck who replaces them.

Not the answer you're looking for? Browse other questions tagged economy international covid-19 federal-reserve central-bank .

12
What are the details of the Federal Reserve's $1.5 trillion injection?

14
Implications of governments borrowing from a central bank rather than issuing money directly
9
Did any legislation ever prohibit fractional reserve banking by introducing something like the Chicago Plan?
1
Why did the US government let Lehman Brothers go bankrupt and not other Wall Street banks?
4
Below-zero interest rates vs. inflation?
6
Why Turkey's president thinks that by cutting interest rate it will lower inflation?
3
Has the Thai government taken a position on the strength of the Thai Baht?
5
How has public opinion of the European Union changed as a result of the COVID-19 crisis?
3
Can other countries central banks impact the decision of the Federal Reserve?