How much of the US media referred to the COVID-19 as the "Wuhan Virus" until it received an official designation from the WHO?

For a fun exercise, put a news organization into google's search along with "Wuhan Virus" and scroll through a few pages of results. You'll find things generally split into two camps: 90% of the results are for recent articles which talk about racism/non-racism/etc of the term... and 10% of the results are for articles from Jan/Feb which use "Wuhan Virus" as the term of choice to describe the virus in a straight-forward manner. [...] So now the term "Wuhan Virus", which up until a month ago was a professional term, is full-out racist.

How much of the US media referred to COVID-19 as the "Wuhan virus" before it received an official WHO designation on February 11th? Basically, was this "Wuhan virus" (term) a common occurrence in the US media in Feb and Jan this year?

Max Rissuto from DFRLab has analysed this in an article published on March 17th which tests the media bias claims made by Republican politicians including GOP House Leader Kevin McCarthy, who tweeted that "Democrats are trying to score political points by calling Republicans racist" and that the "media called it 'Chinese coronavirus' for weeks". While McCarthy uses the term 'Chinese coronavirus', Rissuto's analysis also includes the term 'Wuhan Virus'. It should be noted however that this analysis was performed on all English language publications, not just US-targeted media, and has only collected data up until March 10th.

DFRLab conducted a series of queries using a media monitoring tool to test the claim that media organizations are acting hypocritically in this way, gathering information about how geographic adjectives were used by the media to describe the disease before the official name of "COVID-19" was applied by the WHO. This data is summarized in the chart below. 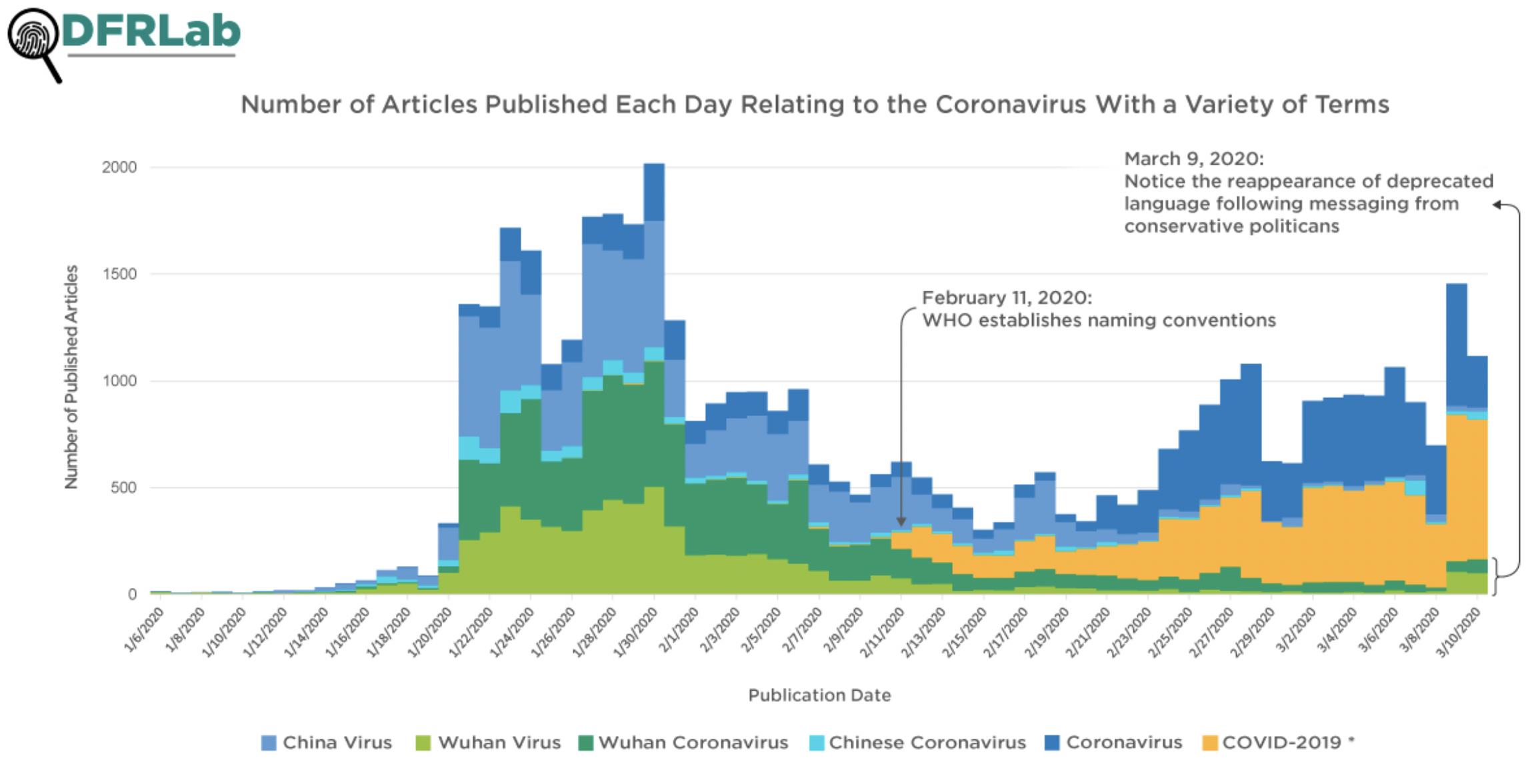 From this data, we can see that the terms 'Wuhan Virus' & 'Wuhan Coronavirus' both had widespread use in English language media from the end of January up until the WHO named the disease on February 11th. The usage was comparable to the usage of the terms 'China Virus', and less commonly, 'Chinese Coronavirus'. After this date, we see the usage fall away dramatically, albeit not entirely, up until the recent debacle surrounding the use of geographic adjectives by various US and international politicians. This could also be due to the fact that as the virus spread throughout China, publications that would have used 'Wuhan Virus' found 'China Virus' to be more accurate.

In conclusion then, while a significant proportion of articles used the term 'Wuhan Virus' prior to naming conventions for the disease being established, after this point most media outlets switched to using the official terminology. The usage of the term has seen a resurgence in the media recently due in part to publications reporting on some politician's continued use of this terminology.

The usage of "Wuhan virus", "Chinese virus", and similar terms was widespread. 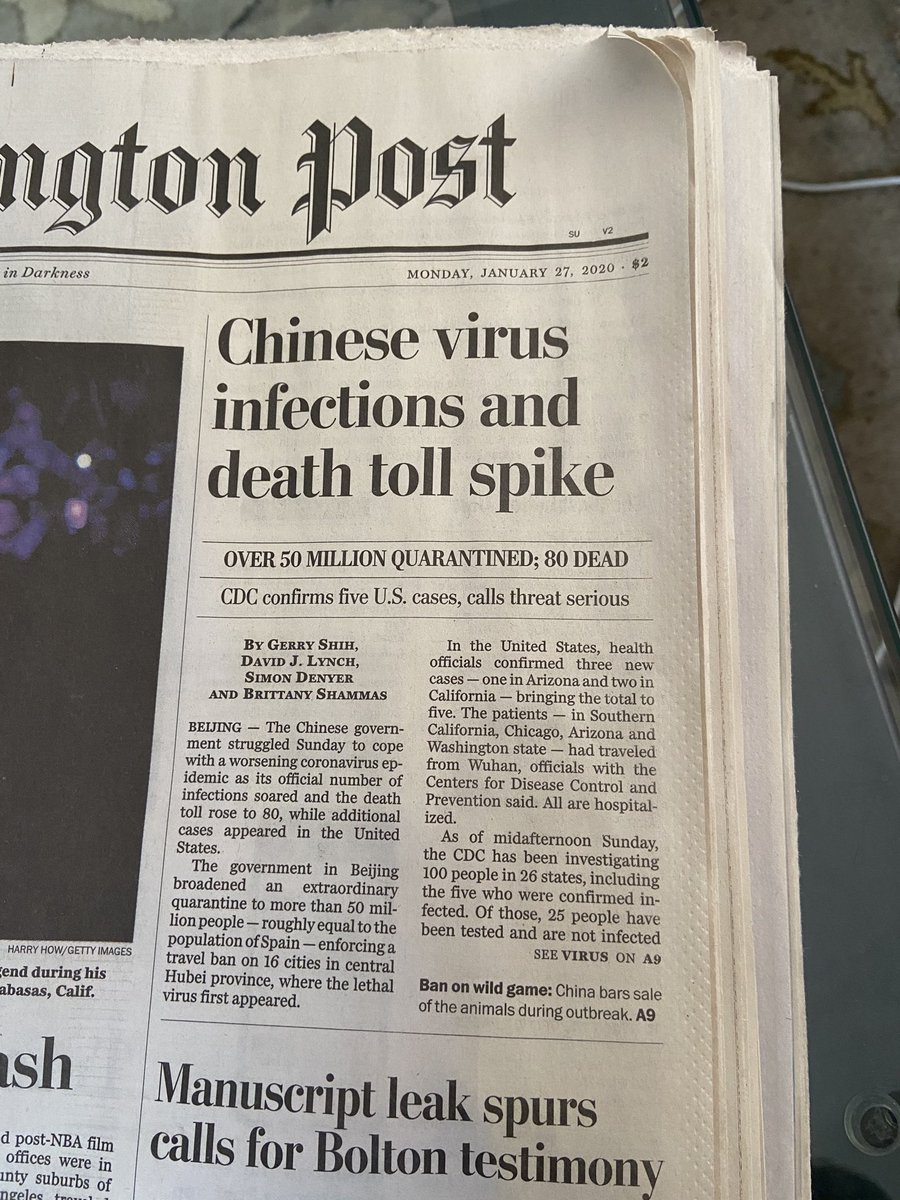 Wuhan virus has killed over 100 in China

There have now been 106 deaths linked to the Wuhan virus

The BBC called it "Wuhan Virus"

The Wuhan virus is a cousin of SARS and MERS. All three are coronaviruses

But while we are worrying about the Wuhan virus ...

116
Why is Trump dubbing COVID-19 as the "Chinese virus" considered offensive, while many past epidemics have had similar naming schemes?
12
How did the US administration usually refer to COVID-19 before the Chinese foreign ministry started claiming the virus is of US origin?

3
How are voting results from local precincts tabulated and passed to the news media?
1
How much funding (if any) does the CDC receive from private industry?
10
How much do the Italian and Chinese COVID-19 lock-down measures resemble each other?
12
How did the US administration usually refer to COVID-19 before the Chinese foreign ministry started claiming the virus is of US origin?
1
How do the conservative media commentators skeptical of Covid-19 explain [away] the freezer truck rows in NYC?
1
What's the earliest date on public record when the WHO requested to visit Wuhan to investigate COVID-19?
3
How common is it for the UK Government to publish official rebuttals of media claims?
5
How has the Scottish Government's handling of the COVID-19 pandemic differed from that of the UK Government?
13
Who will be Georgia's senators from January 3rd 2021 until the results of the January 5th runoff elections are known?
1
Why has the response from the Thai government to the third COVID-19 wave been much more measured than at the beginning of the COVID-19 pandemic?