Why was the World Health Organization against travel restrictions following the COVID-19 outbreak? 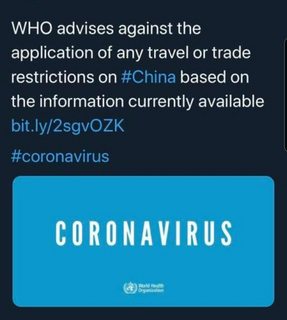 Why did they oppose these policies at that time? Is there any evidence that non-medical considerations such as political pressure played a role in the World Health Organization's decision?

international covid-19 who public-health
Share
Improve this question
edited May 9 '20 at 6:30

Probably because prior WHO research was rather skeptical of their ultimate effectiveness:

Screening and quarantining entering travelers at international borders did not substantially delay virus introduction in past pandemics, except in some island countries, and will likely be even less effective in the modern era.

That paper was co-authored (on behalf of the WHO) by employees of the [US] CDC (lead author actually), the ECDC, the UK's HPA, Australian DHA, and some of WHO's own employees. So you could say it was a fairly broad consensus at the time it was written (2006).

The WHO has actually explained/defended their reasoning in relation to the COVID-19 outbreak in more detail in a February press release:

WHO continues to advise against the application of travel or trade restrictions to countries experiencing COVID-19 outbreaks.

In general, evidence shows that restricting the movement of people and goods during public health emergencies is ineffective in most situations and may divert resources from other interventions. Furthermore, restrictions may interrupt needed aid and technical support, may disrupt businesses, and may have negative social and economic effects on the affected countries. However, in certain circumstances, measures that restrict the movement of people may prove temporarily useful, such as in settings with few international connections and limited response capacities.

Travel measures that significantly interfere with international traffic may only be justified at the beginning of an outbreak, as they may allow countries to gain time, even if only a few days, to rapidly implement effective preparedness measures. Such restrictions must be based on a careful risk assessment, be proportionate to the public health risk, be short in duration, and be reconsidered regularly as the situation evolves.

Travel bans to affected areas or denial of entry to passengers coming from affected areas are usually not effective in preventing the importation of cases but may have a significant economic and social impact. Since WHO declaration of a public health emergency of international concern in relation to COVID-19, and as of 27 February, 38 countries have reported to WHO additional health measures that significantly interfere with international traffic in relation to travel to and from China or other countries, ranging from denial of entry of passengers, visa restrictions or quarantine for returning travellers. Several countries that denied entry of travellers or who have suspended the flights to and from China or other affected countries, are now reporting cases of COVID-19.

Temperature screening alone, at exit or entry, is not an effective way to stop international spread, since infected individuals may be in incubation period, may not express apparent symptoms early on in the course of the disease, or may dissimulate fever through the use of antipyretics; in addition, such measures require substantial investments for what may bear little benefits. [...]

I haven't found more recent press releases on this matter, especially after the US and the EU have imposed much more wider travel bans. I do wonder the extent to which the WHO might have reconsidered that initial approach...

Aside, comment on the question... I wonder why you found it necessary to use "that guy from India" as the motivator for this question when (in the US) a poll published on March 26 says...

Not the answer you're looking for? Browse other questions tagged international covid-19 who public-health .

6
Has the WHO said anything about travel restrictions since the end of February?
3
Have governments’ restrictions on travel been supported by expert advice?
-4
What was WHO's defence from US Republican attacks that the WHO "really blew" their response to the pandemic by being "slow" and "deceptive"?

4
Does the World Health Organization have the power to impose sanctions?
6
Has the WHO said anything about travel restrictions since the end of February?
5
What sustainable options do poorer non-first world countries have against COVID-19?
33
Why is the United States voluntarily funding the World Health Organization 60 times more than China?
10
When Fauci called for China to shut down the "wet markets" (on Fox News) was he specific what he meant by that term?
3
How did the US "sabotage" the adoption of the latest World Health Assembly resolution regarding Covid-19?
1
Why do some governments completely remove COVID-19 restrictions instead of keeping minimum ones?