How are the job approval ratings of Governor Andrew Cuomo and mayor Bill de Blasio faring during the COVID-19 crisis?

There has been a question here about the job approval rating of Trump in this Covid-19 pandemic. (Slight increase.)

I wonder how the governor and mayor of US most affected US state & city, that is NYC (and NY state) are doing in the opinion polls lately.

Both of them, but particularly Cuomo, have received exceptionally high marks.

According to a Siena poll posted on March 30th with data collected 3/22 - 3/26, approval of Cuomo’s pandemic response is 87-11, including 70% approval from Republicans! DeBlasio’s is lower, but still quite good at 61-31 approval to disapproval. 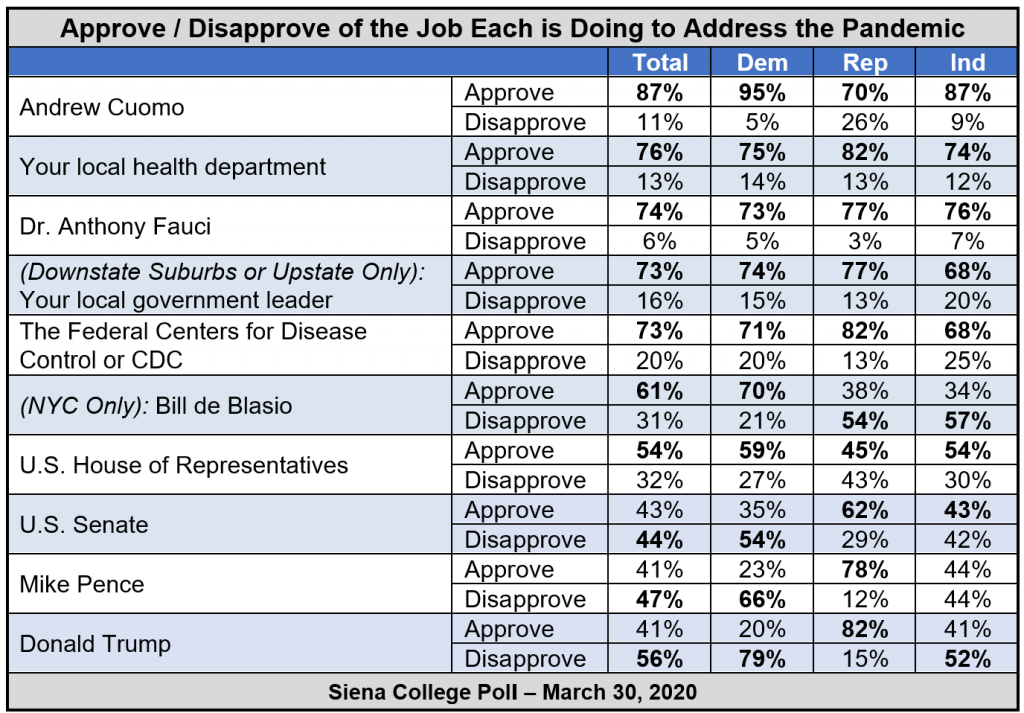 The above figures are specifically about how well they've done to address the pandemic, but Cuomo’s overall approval has also improved by 54 points to a near record high of 71-23. 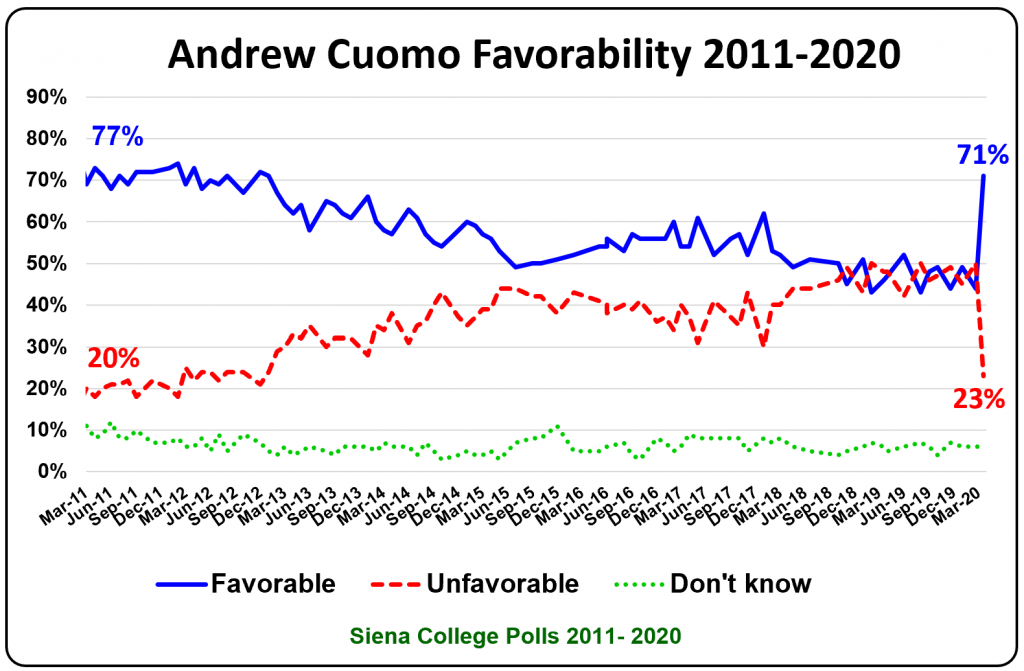 The Hill is also reporting on a national poll conducted by Harvard CAPS/Harris from March 24th - March 26th which shows Cuomo with a national approval rating of 45%, nearly as high as Trump with 48%. Annoyingly, I can't find that actual data anywhere, so we just have to go off the quotes they provide:

Forty-five percent of Americans say they have a favorable view of how New York Gov. Andrew Cuomo (D) is responding to the coronavirus pandemic, according to a new Harvard CAPS/Harris poll released exclusively to The Hill.

Harvard CAPS/Harris polling director Mark Penn told The Hill. "No question he is seen now as a leader at least with Democrats and not seen as partisan since he is favorable right now by 2 to 1."

If we take Penn at is word, that would mean that his approval is 45%, disapproval is ~ 22% and no opinion is 33%. While 45% doesn't sound that high, I'd argue that it's surprising for that many people nationwide to have a positive opinion of a local politician from another state.

Not the answer you're looking for? Browse other questions tagged united-states covid-19 public-opinion .

24
How has the handling of the coronavirus outbreak (CoViD-19) affected Donald Trump's approval ratings?

14
Has the effect of crises on leaders' approval ratings been researched?
10
What survey data exists about how Americans are weighing trade-offs in COVID-19 responses?
24
How has the handling of the coronavirus outbreak (CoViD-19) affected Donald Trump's approval ratings?
35
Why did Wisconsin Republicans oppose postponing the April 7th election despite COVID-19 shutting down nearly all polling places?
10
How has the apportionment of blame for COVID-19 by party changed over time in the US?
4
How are deaths recorded and reported in the US?
1
Shift by precinct NYC 2016 to 2020?
6
Why has Narendra Modi's approval rating remained high despite massive protests by Indian farmers?