How overcrowded are NY parks? Have they been deemed dangerously so from a public health perspective during this Covid-19 outbreak? [closed]

Ask Question
Asked 3 months ago
Active 3 months ago
Viewed 117 times
2
Closed. This question is off-topic. It is not currently accepting answers.

According to a NY Post article, parks in New York have become so overcrowded during this Covid-19 outbreak (supposedly because residents can't find anywhere else to go, e.g. restaurants are closed), so much so that some use cemeteries as parks in the hope of finding a less crowded spot. How accurate are these journalistic impressions? Is there data on the increase in overcrowding in NY parks during this outbreak, and if so, have there been any public health estimates on the danger that these park crowds may cause?

(I see that Cuomo was incensed by the crowded parks, but that was more than a week ago. He did close playgrounds, in the meantime.)

To those who think this can't be but BS (per comments below), governor Cuomo and mayor de Blasio have disagreed often enough, e.g. The Atlantic relates their disagreement on school closures:

De Blasio angered New York parents and some of his own allies by resisting for days a decision to close schools, acting only following pressure from Cuomo and after a near-revolt by advisers and top public-health officials. “He’s both a bad decision maker and not good at communicating about it,” said an elected New York Democrat and former ally of the mayor’s, who spoke on the condition of anonymity to preserve a working relationship with the de Blasio administration.

So I wouldn't be surprised they disagreed about parks too. The question whether the parks are crowded obviously has a public-health and thus a political dimension too nowadays (so I disagree with those who think this is off topic.)

And if you need anther source, the March 23 story was covered by Bloomberg too, with a March 20 image: 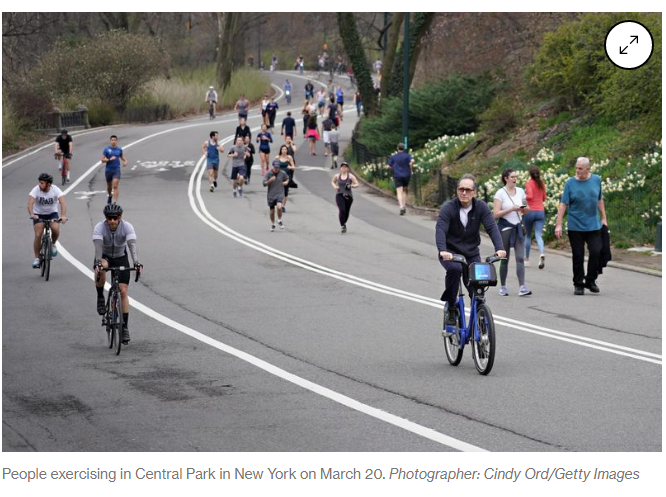 Tired of being cooped up at home, hordes of New Yorkers headed to Central Park and other open spaces in the city over the weekend -- and that’s making Governor Andrew Cuomo very irritated.

Calling the crowds “wholly inappropriate” amid a statewide stay-home order, he’s now asking the city to develop a plan that he can approve Monday to correct that.

“We talk about social distancing,” he said. “I was in these parks, and you would not know that anything was going on.”

I don't know how [un]reliable "The Gothamist" is, but they posted these images supposedly from March 27: 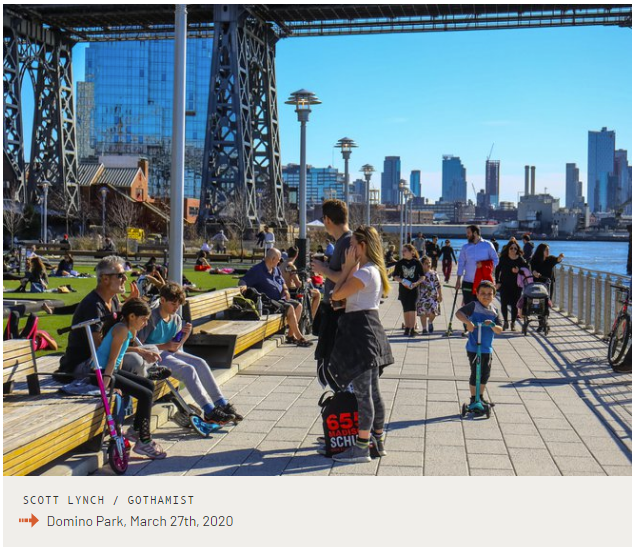 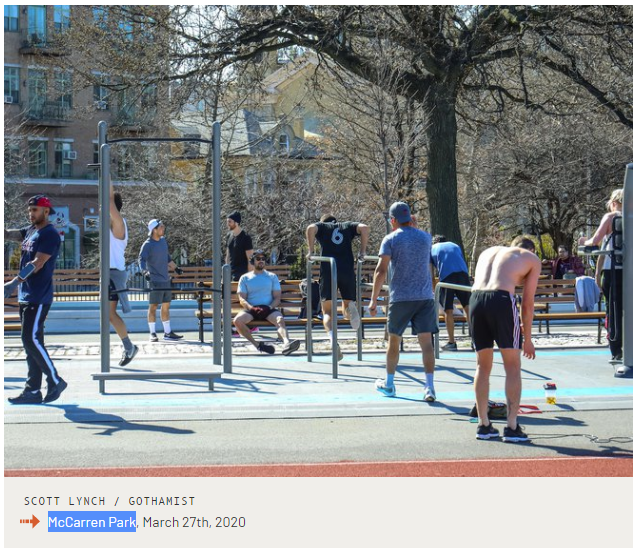 Of course, a lot can change in a couple of weeks in people's attitudes, even if the parks are still open. And likewise some photos may be unrepresentative. The question is: did any behavioral change happen that made the closures unnecessary, or was Cuomo ranting like a madman and there was no problem to begin with?

I don't know about NYC, I live in NC. Since our state and county governments began issuing stay at home orders, I've noticed an incredible number of people gathered in our parks - far more than what I'd see on a typical day.

The entrances to our state parks were closed, but access to lakes is still available for boats. It hasn't been uncommon to drive by a lake access point and see hundreds of people tightly gathered by the loading ramps. Trail-heads which on a great day would have 1 or 2 cars parked now have as many as 20 or 30. And I've never seen church parking lots so packed.

So, if NYC is anything like where I live, it wouldn't be at all surprising to find community parks jammed.

From what we hear on a daily basis, we need to stay home except for essential requirements. We need to stay at least 6 feet from anyone not in our immediate family (as in those living under the same roof). And even more recently, we need to be wearing masks when out in public. We shouldn't be hanging out with groups of more than 10 people (and that's not so much for viral safety, that's for social sanity). And like any virus, it makes no difference if it's passed indoors or out. The chance of infection remains the same either way.

Not the answer you're looking for? Browse other questions tagged united-states covid-19-virus public-health new-york .