Why do governments downplay or cover-up pandemics in their early stages?

While no government wants there to be a pandemic, and would certainly prefer (hope) for it to just go away, they can only downplay it for a short time before it overwhelms the population and they must address it from a significantly weaker position than if they had acted decisively at the beginning.

In the smartphone era, information propagates instantly through informal networks (Facebook, WeChat, StackExchange, etc.) and is difficult to suppress.

After witnessing the COVID epidemic and failure to contain it in Asia, it spread to Europe and was poised to infect the west. Why did western hemisphere leaders downplay the pandemic’s threat instead of acknowledging the problem and communicating what would be done to reverse the issue? What is the political incentive for deferring acknowledgement and action?

In hindsight it's clear that many governments should have taken the risk of a Covid19 pandemic much more seriously, but it's not that easy to anticipate the reach and intensity of the epidemic before it happens. There have been other serious threats before for which the containment strategy proved sufficient, and if a government allocates resources (for instance massive purchases of masks and ventilators) which end up wasted they are going to be criticized as well.

This article in the Guardian argues that most European countries were not as well prepared as some Asian countries because:

It seems that when an epidemic threat presents itself a government must make a call between:

Note: this answer is made of recycled material from a closed question of mine.

There can be different motivations for this, ranging from mere bureaucratic "ostrich" cover-up, i.e. hope it goes away, which is probably what happened at city level in Wuhan in the early days, to more "rational" decisions not to do anything (or to implement limited/gradual responses), where "rational" means you have some other objective (to balance) than the short-term saving of lives. E.g. quote from a (former?) economic adviser of Trump:

“We put a lot of weight on saving lives,” said Casey Mulligan, a University of Chicago economist who spent a year as chief economist on Mr. Trump’s Council of Economic Advisers. “But it’s not the only consideration. That’s why we don’t shut down the economy every flu season. They’re ignoring the costs of what they’re doing. They also have very little clue how many lives they’re saving.” [...]

In novel outbreaks like this, a lot of the epidemiological factors that affect the severity of the outbreak, including the famous R0 (how many people get infected by one who already is) and the ratio of asymptomatic to symptomatic infections are initially estimated pretty far from their ultimate value, which affects estimates for the CFR (case fatality ratio) and IFR (infection fatality ratio). For a past of such (over)estimation example see, H1N1/09.

"It's good to remember that when H1N1 influenza came out in 2009, estimates of case fatality were 10 per cent," said David Fisman, an epidemiologist at the University of Toronto, who was working in public health at the time. "That turned out to be incredibly wrong."

"As the denominator is growing in terms of case numbers, and case fatality goes down and down ... you start to realise it's everywhere," he said.

The prediction job is hard even for the experts; the WHO got flack [from some quarters] practically for every recent pandemic, for "calling it wrong", e.g. as reported at the end of January 2020:

WHO's cautious approach to the [Covid-19] outbreak, which has been challenged by some critics, can be seen in the context of past criticism over its slow or too hasty use of the term, first used for the deadly 2009 H1N1 swine flu pandemic.

During that outbreak, the UN health agency was criticised for sparking panic-buying of vaccines with its announcement that year that the outbreak had reached pandemic proportions, and then anger when it turned out the virus was not nearly as dangerous as first thought.

But in 2014, the WHO met harsh criticism for dragging its feet and downplaying the severity of the Ebola epidemic that ravaged three West Africa countries, claiming more than 11,300 lives by the time it ended in 2016.

There are various economic models that attempt to suss the optimal a response to an outbreak (see e.g. Stock, Eichenbaum et al., Ornelas), but they key message here is that these models are quite sensitive to the aforementioned biological/biosocial parameters of the outbreak. For a (great) visual clue as to sensitivity to parameters/assumptions, the Economist has this graph in an April 11 article: 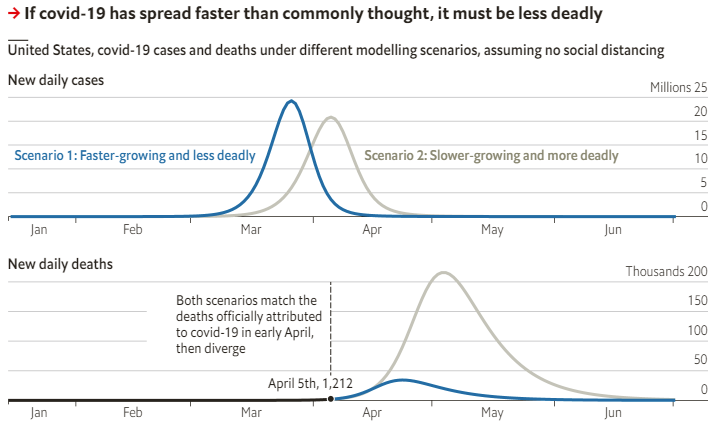 ... meaning that getting a slightly wrong estimate for a parameter can result in countermeasures way off the intended result-path, even when you have a clue what your objectives are...

Which for politicians can be even more complicated, if their main objective is to get re-elected (or not overthrown in a coup) because there's the additional proxying layer of how the public (or power players) are going to react/judge the measures relative to a counterfactual scenario that never plays out. Even when things "go wrong" in one country, it's fairly difficult even for experts to say why exactly (i.e. eliminate all confounders), never mind having the public make a correct cross-country assessment; see famous question here about the US public opinion on US vs. South Korea responses to the outbreak, which exhibited great polarization depending on the respondent's political affiliation.

So there are multiple layers on which a political response can "sink or swim". Additionally, there has been a rally around the flag effect for political leaders during this outbreak, apparently regardless of what they did, so to some extent they can "do no wrong" in the public eye in such circumstances i.e. when the outbreak does turn out serious/disastrous. (I'm guessing we'll see additional political science research on this in the future, i.e. whether the initial denialist/downplaying political response has any effect effect whatsoever on later public opinion or if it just gets completely swamped by the later swings in public opinion when an outbreak proves really serious, e.g. via "rally round the flag".)

Somewhat related: regarding how China eventually made the "right call" (when stopping the pandemic became their main objective), there's a March 31 paper (Tian et al.) in Science now on a model of their measures. This paper found that just shutting down transport from Wuhan or just implementing "Level 1" quarantines in cities with local outbreaks was not going to be enough in terms of limiting the pandemic. They had to do both. Which however is the most costly, economically, in the short run at least. They actually shut down transport from all affected cities, which in hindsight had no additional benefit though. And another point (of comparison) from that paper, with regard to H1N1/09:

The dispersal of COVID-19 from Wuhan was rapid (Fig. 3A). A total of 262 cities reported cases within 28 days. For comparison, the 2009 influenza H1N1 pandemic took 132 days to reach the same number of cities in China (see methods in Supplementary Materials).

It's useful to understand the dynamic of governance: 'Authority' is always power granted to a leader by citizens or subjects, and in order to maintain power a leader must maintain the impression that s/he is the rightful person to use and maintain that power. This is particularly clear in democratic nations where leaders periodically need to convince voters to re-elect them, but even authoritarian regimes need to maintain an air of competence and rightfulness, or risk outright revolt. The death knell for most authoritarian regimes is when the leader becomes an object of criticism, scorn, or ridicule.

With this in mind, leaders faced with natural disasters like pandemics have an imperative to behave as though they are completely in control of the situation, and that often means a refusal to suggest in public that there is any 'situation' that needs to be controlled. The more authoritarian the leader is, the less inclined they will be to admit there is a problem, because admitting there is a problem is tantamount to admitting they to weakness. Any such admission of weakness is a direct threat: it might cause the public to question the leader's fitness to wield authoritative power, leading to political unrest as other potential leaders seek to grab that granted power for themselves.

Imagine, with the benefit of hidsight, what would have been the best possible early policies against COVID-19.

Now imagine a government doing that on three separate occasions against SARS, H1N1, then Ebola. Alongside other governments which did much less and it turnet out allright.

It would have looked exaggerated.

Why do governments downplay or cover-up pandemics in their early stages?

Because most problems disappear over time, even when nothing is done. So why would anyone enact unpopular measures if there is a chance those are not needed?

SARS, H1N1, Ebola: in all those cases this strategy worked or would have worked. COVID-19 is the exception to the rule.

Politicians who kick the can down the road, will barely ever be held responsible for past mistakes. If some decision turns out to be wrong many years later - a big if - the politician is already in some other role where people don't even know about that past mistake. While the current one responsible will just blame the predecessor. Everyone escapes responsibility in practice.

As a result, "kicking the can down the road" is a valid strategy for politicians. In fact, as almost all politicians at the higher levels act that way, it looks like it is requirement to survive the lower tiers.

The uniqueness of COVID-19 is the speed with which inactivity is exposed and punished. The ones who didn't act quick enough two months ago, are still in power.

Not the answer you're looking for? Browse other questions tagged public-health .

51
Why do Western countries seem to be less efficient than Asian countries in fighting against COVID-19?
31
Is there an explanation for why ~20% of Americans think the US's response to COVID-19 has been better than South Korea's?
14
Has the effect of crises on leaders' approval ratings been researched?

11
Why have some governments banned outbound international flights in response to COVID-19?
2
Why did the Chinese government change their publicly-reported COVID-19 infection and death rates?