How has public opinion of the European Union changed as a result of the COVID-19 crisis?

The response of the EU to the COVID-19 pandemic has not exactly been unified. Despite finally reaching agreement on a €500bn rescue package on Thursday, this came after weeks of argument, particularly on measures such as coronabonds, and in the meantime seemingly a dearth of combined EU aid for the worst hit countries such as Italy & Spain. The package also is only a third of what the European Central Bank said may be needed to tackle the crisis.

The EU is stumbling through this crisis as it has done through the migration and the financial crises before, for instance. The bloc is not about to disintegrate but scars will remain in countries that felt the chilly absence of EU solidarity in their hour of coronavirus need.

"This has not been our finest moment," a diplomat from an influential EU country told me. "Our response has come late and has been marred by nationalism. Solidarity went out the window with the first coronavirus victim."

The Hague blocked the talks two days earlier by insisting that Italy, or any other country in need, deliver on governance targets – which Rome saw as a shocking demand during a health crisis.

Despite 19 EU countries sharing a common currency, member states have reacted unilaterally to save their economies, giving richer countries such as Germany a big advantage over those with less spending power.

Given the lack of unity within the bloc that this seems to expose, how has public opinion towards the EU within EU member states changed as a result of the COVID-19 pandemic? I appreciate that polls specifically asking about the bloc's reaction to the pandemic might be hard or impossible to find, in which case how has public opinion of the EU within EU member states changed over the last three months?

It's harder to measure change in opinion, since that would require us to compare studies from before and after, or to find a study that was conducted over a longer period where respondents were questioned multiple times. Instead, I will present two studies which take a snapshot of public opinion in April 2020.

A study on public opinion in early April

Early in April, a study was conducted on government response. While most questions were aimed at the perception of national measures, there was also a question on the European Union. A quote on the study's methodology:

We surveyed over 7000 people representative of the adult population in seven European countries: Denmark, France, Germany, Italy, Portugal, the Netherlands, and the UK. The fieldwork was conducted online during April 2–15, 2020, using multi-sourced online panels provided by the market research company Dynata.

The results on trust in different institutions in best summarized in the figure from the paper below. Respondents were asked to rate their trust in these institutions on a scale from 1 to 5. Expressed in numbers, the paper wrote:

Furthermore, a similar north-south gradient was observed concerning the trust in the EU: trust was highest in Denmark (45 %), Germany (40 %), the Netherlands (39 %) and the UK (35 %), whereas it was lowest in Italy (24 %) and France (21 %). Portugal was an exception to this case since the corresponding value here constituted 46 %. 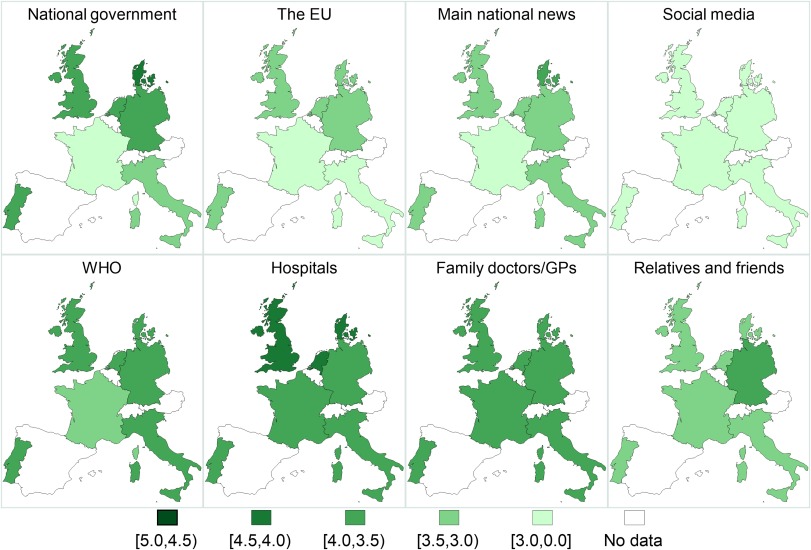 Source: I.Sabat et al. United but divided: Policy responses and people’s perceptions in the EU during the COVID-19 outbreak

Another survey was commissioned by the European Parliament, it's described as:

This is one of the few multinational surveys delving into European citizens’ attitudes and opinions over the course of the Covid-19 pandemic, presenting the findings of a survey commissioned by the European Parliament and conducted by Kantar at the end of April 2020.

The results are presented in a report here. They also present a few infographics, where the one on the EU's response seems the most relevant to this question: 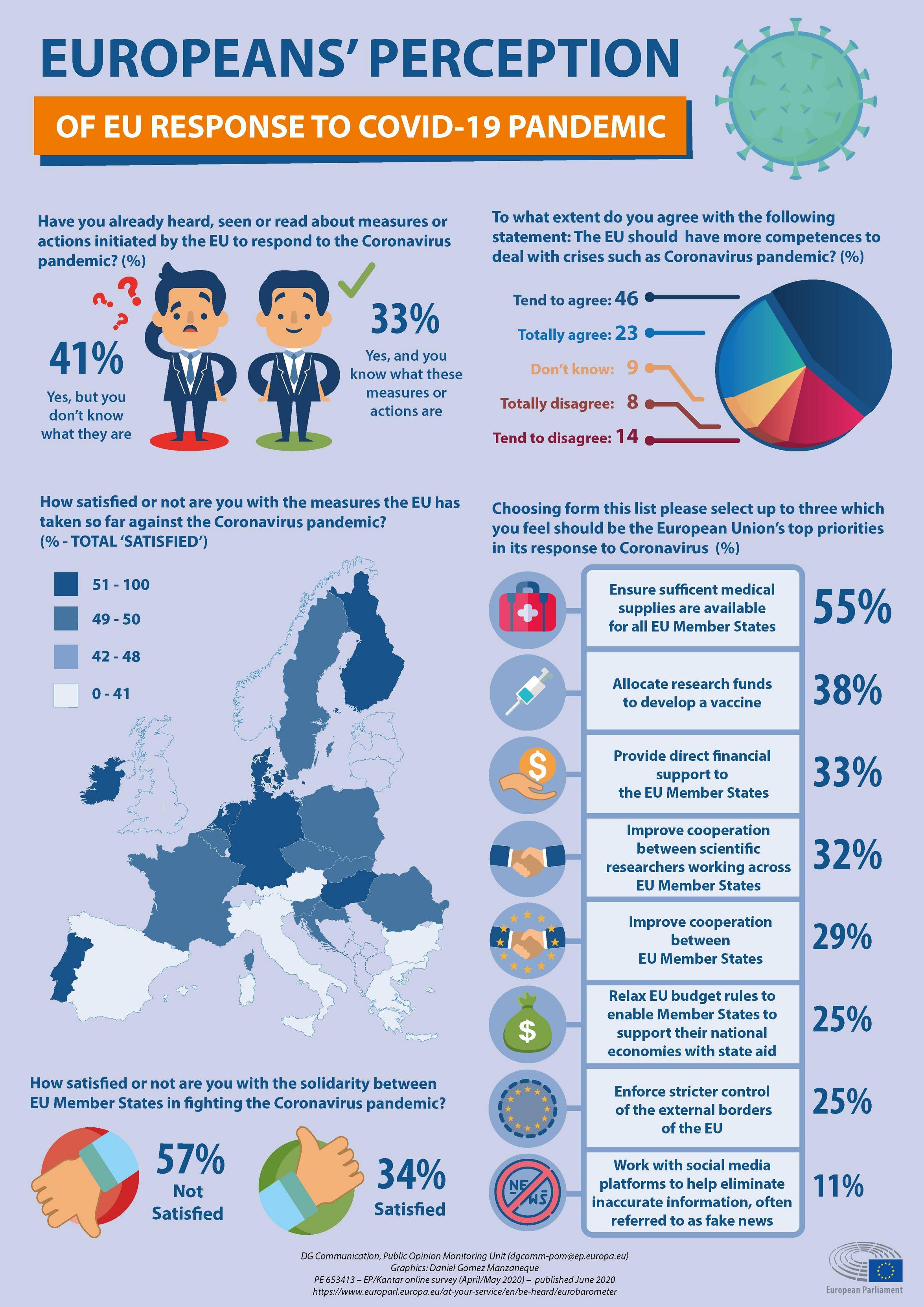 The report also covers the question below for which results are presented in the screenshot of the report below:

How satisfied or not are you with the solidarity between EU Member States in fighting the Coronavirus pandemic? 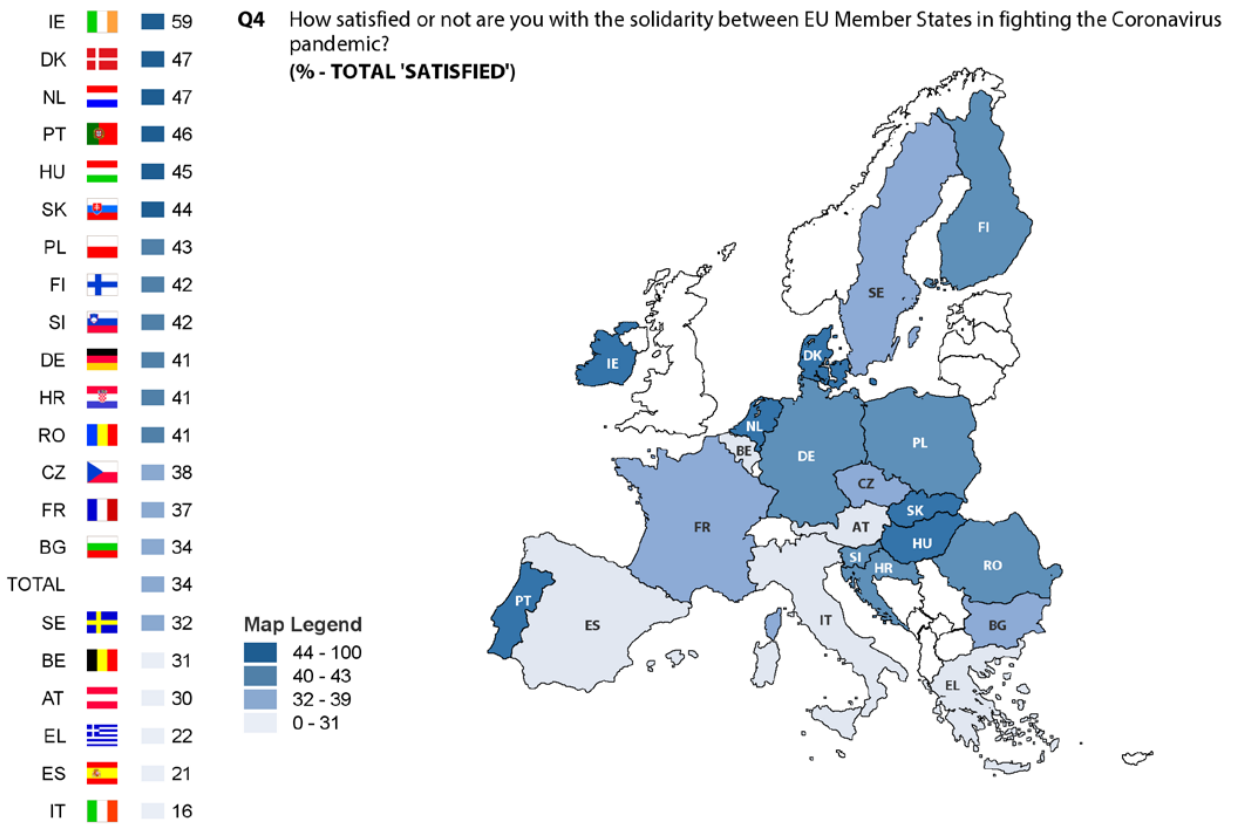 Not the answer you're looking for? Browse other questions tagged european-union public-opinion covid-19 .

9
What are the benefits of the proposed Euro/Corona bonds over conventional government bonds?
1
Are there any EU/NATO/Atlantic help programs for Italy?

4
Does the World Health Organization have the power to impose sanctions?
1
How are the job approval ratings of Governor Andrew Cuomo and mayor Bill de Blasio faring during the COVID-19 crisis?
5
Has the membership of SAGE during the COVID-19 pandemic been published?
3
How common is it for the UK Government to publish official rebuttals of media claims?
10
How has the apportionment of blame for COVID-19 by party changed over time in the US?
6
Is there a way for the EU except for Hungary and Poland to use Pandemic Relief Funds without approval coming from Hungary and Poland?
2
What is preventing UN from playing a more assertive role atleast in Global Pandamic situation?
1
To what extent have developed European countries utilized strategies that Australia utilized against Coronavirus?
5
What is the opinion of Irish nationalists on COVID-related border checks?