Why is the United States voluntarily funding the World Health Organization 60 times more than China?

The U.S. has contributed about $893 million to the WHO’s operations during its current two-year funding cycle, according to the organization. China has given about $86 million over the same period.

Which means that the United States funds the World Health Organization 10 times more than China.

Which means that the United States voluntarily funds the World Health Organization 60 times more than China. Why?

Partial frame challenge if you like. Fox News has chosen an interesting year to highlight. As you can see, US voluntary contributions have varied a lot; only $112 million in 2011 (and similar in 2014) for example. 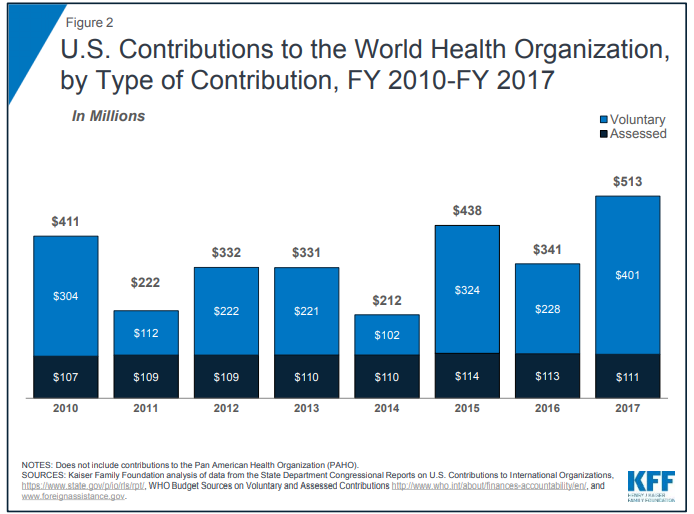 A portion of these are also "earmarked funds", i.e. WHO can't spend them as they please, but only as the donor specifies, so e.g. the US DoD funds the WHO only to do some stuff in… South Korea! (It's true USAID funds a few more countries.) There are probably global activities that don't show up on that map though. 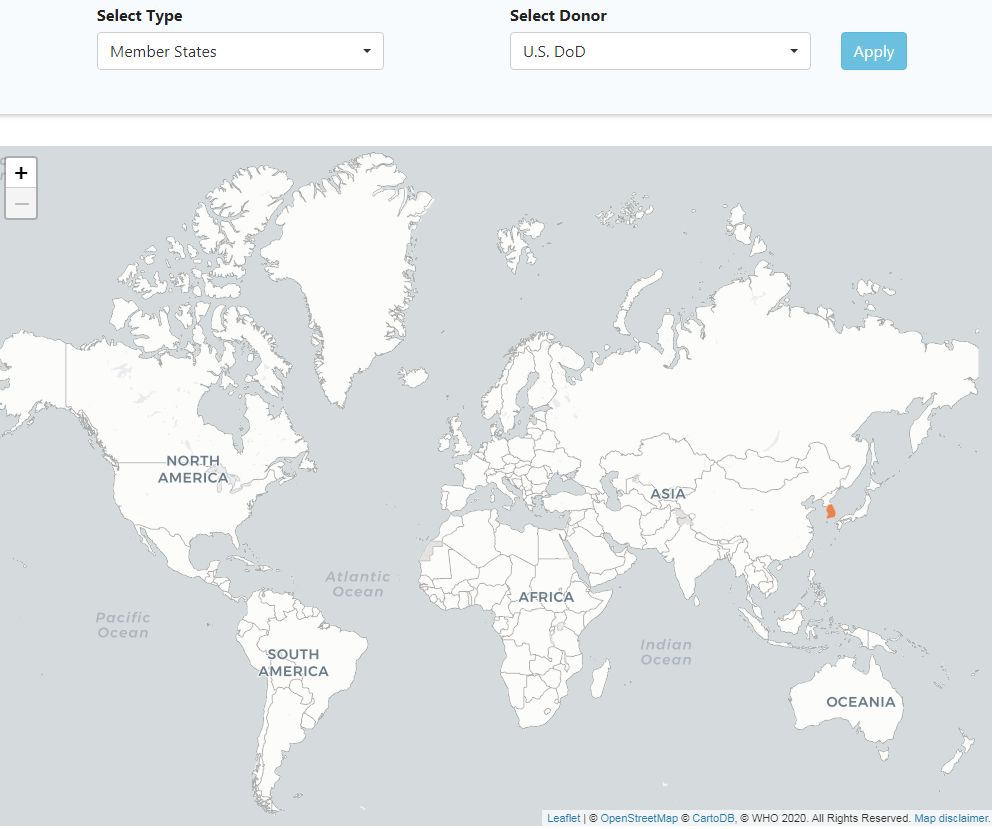 From a WHO budget breakdown you can see that most of the voluntary contributions are not "core" but "specified", i.e. earmarked. 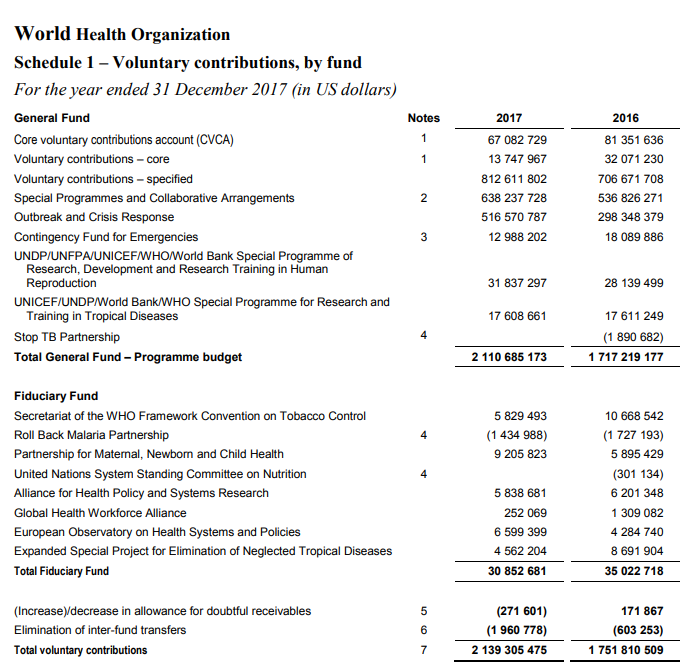 The better question probably is "Why is China not giving more?". But I doubt they put out a press release about that.

And if we are to speculate why the US government is giving "so much", perhaps it's so they don't get bad press every year if the Bill & Melinda Gates Foundation were to consistently outspend them:

Since it began supporting WHO a decade ago, the Bill & Melinda Gates Foundation has been contributing between US$ 250 million and US$ 300 million a year. In one year – 2013 – it was the largest donor bar none, overtaking total contributions from the governments of both the USA and the UK.

Re. assessed, rather than voluntary contributions, this article goes into the funding calculation basis, for the UN as a whole (the WHO being part of the UN). The reason it's relevant is that, in political discourse, the US's share of UN contribution often comes up and it is definitely part of the general pattern of discussion on this type of subject.

Roughly speaking it seems to be based on % of gross world income, adjusted for debt level and wealth/poverty at a per capita basis.

I.e the US has almost twice the share of world income and its per capita basis is 6x. Debt can't figure too much into this, or else Japan and Italy would drop lower.

Edit: as this seems to cause some confusion...

by that logic, the biggest donors would be micro-countries like Luxembourg, since they usually dominate every "per capita" ranking.

Yes, and Luxembourg (112K$ GDP/person) is probably one of the biggest contributor per person. But since there are only about 600k Luxies adding up all their contributions would not dominate world rankings.

In neither case is the big question about only just the gross Luxembourg /Bangladesh national GDPs. It's mostly about wealth per person multiplied by the number of citizens.

Now, don't quote me on these $50/0.50/0.05 numbers, I just picked them to run through the math illustrating outcomes. The linked article explains it in more in detail. In the specific case of Bangladesh, as an LDC (Least Developed Country), it gets an ever bigger break in any case, being limited to .01% of the UN budget, max (roughly 5M$ out of 50B$).

The US is in its particular funding position because it is both one of the top-decile wealth per citizen (#7 in fact) and because it is a very big country (#3 after China and India) so per person assessments add up. When China starts nearing the US per person wealth, it will totally shoot up the contribution list. So, if the US stridently limits itself to max 20% for example they may come to regret it when China's bill ends up higher.

Also, if you look at the overall contributions, and you take say Germany, Norway or Canada's contributions, considering their sizes, the US's UN funding portion seems rather less exceptional.

Note: quartz, where I got this from has a left-center bias, with high factual accuracy rating from mediabiasfactcheck. I suppose it would be better to find a fully unbiased, but those are getting hard to find these days and I am lazy. 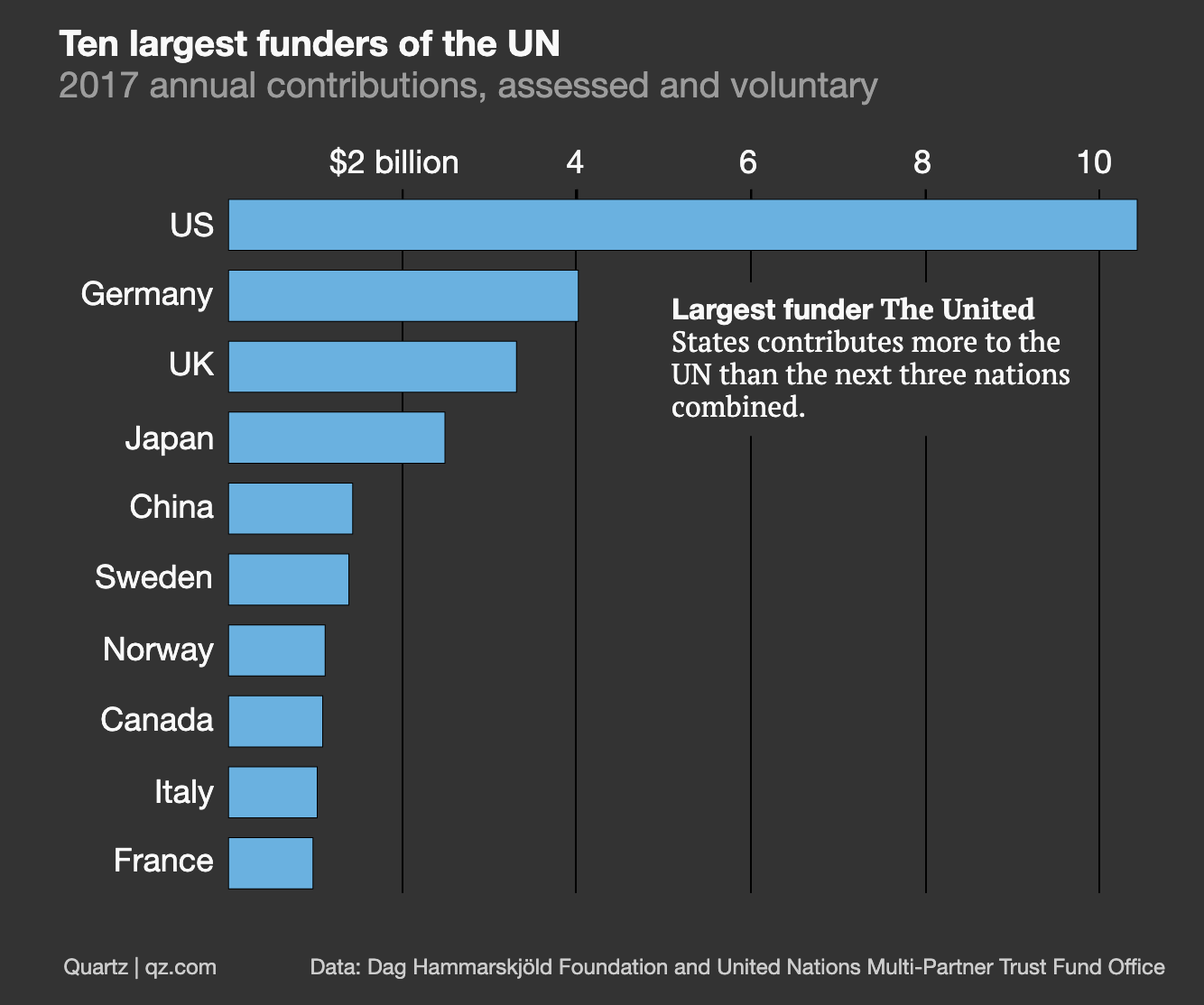 For example look at the data quoted in an other answer:

Someone should compile the data and use GDP in addition to population, but based on this sample data and my own knowledge, the USA is far behind most western european countries in giving money to the UN.

A plausible reason why both China and USA, i.e. super powers, pay less into international organizations than smaller powers is because less powerful countries have interest in strenghtening formal international cooperation, because such cooperation strengthens the weak.

Not the answer you're looking for? Browse other questions tagged united-states china healthcare funding who .

30
Why do people in the United States seem so averse to a Public Health system?
5
Have Republicans or others elaborated concretely why (some) election security bills would be partisan?
4
Does the World Health Organization have the power to impose sanctions?
11
Why was the World Health Organization against travel restrictions following the COVID-19 outbreak?
3
How did the US "sabotage" the adoption of the latest World Health Assembly resolution regarding Covid-19?
1
Under what domestic legal framework did Trump withdraw the US from UNESCO?
46
What benefit does the USA gain when it withdraws from WHO?