Is the UK reporting (extra) deaths in care homes now as related to Covid-19?

After some scandals, e.g. France started to report some deaths in "ESMS" (which includes nursing homes) as probably being related to Covid-19.

Following criticism about French COVID-19 statistics not reflecting the dozens of people dying in senior citizens’ residences or their own homes, the health ministry on Thursday [Apr 2] provided the first data on deaths in nursing homes. [...]

The ministry did not provide a breakdown for deaths per day in nursing homes, but said a provisional cumulative death tally since the start of the epidemic rose to 1,416 on Friday, an increase of 532 over the 884 first reported on Thursday.

The provisional nursing home tally while still incomplete accounts for more than a fifth of all French COVID-19 deaths.

That caused a clear spike in deaths reported from France on those Apr 2-4 days. There have been more spikes since then in France, which may be related to other reporting (backlog) issues. 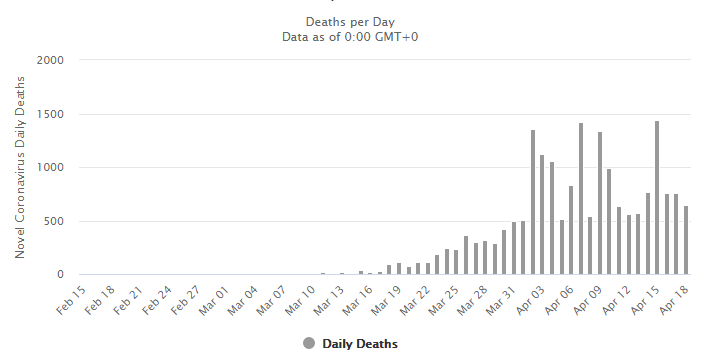 New York City even started/planned to report deaths at homes on April 8.

Over the last two weeks, the city's fire officials said more than 2,192 New York City residents died in their homes, compared to 453 during the same time period last year.

Mayor Bill de Blasio acknowledged on Tuesday [Apr 7] that the vast majority of deaths taking place at home were likely also due to COVID-19, the disease caused by the virus, meaning the death toll could be as much as 70% higher than currently reported figures.

I'm not terribly aware of how the UK has been grappling with the Covid-19 death statistics problem, but a BBC video suggest they've been undercounting deaths in care homes. The interviewee suggested some 4,000 deaths in UK nursing (before April 13) haven't been properly linked to Covid-19.

Looking at the UK death graph, I don't see a clear spike, which usually shows up in a reporting methodology change.

So, are there no Covid-19 deaths reported in UK care homes, unless they go to a hospital? (This was the situation France had before April 3.) Or did the UK managed to include these (presumed Covid-19) nursing home deaths in their statistics "from the get go"?

Deaths in care homes are reported, but the specific source you refer to in your question only counts deaths that occurred in hospitals. These are the statistics which are reported daily by the Department of Health.

The reason deaths outside of a hospital setting, including those in care homes, are not being included in the day-by-day statistics published by the DoH is because as they don't occur in a clinical setting, it may take a while for the cause of death to be determined by a doctor. This time lag is exacerbated by the current crisis, and may take even a couple of weeks. Specifically in care homes, where residents are likely to have a variety of underlying health issues, it will often be difficult to determine the cause of death; whether or not the disease was actually COVID, and if this was the primary or secondary cause of death. This time lag makes it unhelpful to report this data daily, as it is unlikely to give a true picture of the number of daily deaths.

The Director of Health Protection for Public Health England, responded on this matter during a daily coronavirus briefing on April 14th:

Laura Kuenssberg (BBC): If I could ask the medics, can you, from as soon as you possibly can, start including the numbers of deaths in care homes and in the community in these daily statistics, so people can have a true picture of what’s going on?

Yvonne Doyle (PHE): Thank you, Chancellor. Thank you, Laura. Yes. So, the deaths in out of hospital, we, the Office of National Statistics do actually collect total deaths, and we’ve had a download of that today. But Laura, we are working with the ONS to actually speed that up, so that we do get quicker information.

As you know, the daily deaths we would very much like to have, it’s a bit more complicated for care homes, because although over nine out of 10 deaths sadly do occur still in hospital, in the community there’s a range of places where they occur including in care homes, but not just there. In hospices, and at home, indeed, as well.

In these very dispersed systems, we just need to be absolutely clear that the cause of death that is attributed is correct. That is what takes time on the death certificate to get right. But we would like to have much more rapid data, preferably on a daily basis. And that’s what we’re working towards.

Later in the same conference, Paul Brand of ITV made a similar point, which led the panel to provide a bit more of an insight into their reasoning:

Paul Brand (ITV): We’ve been filming today at a care home in Gateshead where they feel as if the residents they’ve lost to COVID-19 are being forgotten. Given that data does exist, however imperfect it may be, wouldn’t it just be more respectful to include those deaths in your own statistics?

Rishi Sunak (Chancellor): In terms of the data, there’s absolutely no desire not to respect what’s happening in care homes and to provide that data. As Yvonne could talk about in a second, we’re actually working with the ONS to speed up the publication of that data. In terms of the data that we publish every day and make decisions on, I think there, there is a question about making sure we have a data set that is consistent and accurate and timely, and I think there is just a logistical challenge in being able to collect that data and then make decisions based on it, but Yvonne can maybe elaborate on that point.

Yvonne Doyle: Thank you, Chancellor. So absolutely. I would very much like to have the best possible data on a daily basis, and the care sector is very much seen as part of the health and care family. They are the front line, and we’re very familiar with that sector through our local work and through our national work with local government and with the local response forums, Then local resilience fora. We work on the outbreaks, which is even more important to discuss in a sense than anything else at the moment, where we have a number of outbreaks in care homes, and there is very active input there to ensure that the damage and the harm to people is mitigated. So we work very actively with the care home sector, but it is a very dispersed sector.

Stephen Powis (National Medical Director for England): I would also say that the reason that we can provide the data very quickly from hospitals is because there are fewer hospitals compared to care homes, so we’re working with a smaller number of organizations. But because our hospitals are very used to the process of supplying data to NHS England on a regular and even on a daily basis, that is something that they do during normal times for all sorts of data. We in the hospital sector have a have an infrastructural basis to get that data rapidly, and of course the patients that we report from hospitals are those that we know have been tasted as positive. Again, that is different from in the community where doctors are registering deaths based on a probable diagnosis and not necessarily on a tested diagnosis, so there are key differences in the two sets of data and how they are collected.

Rishi Sunak: Yeah. Paul, just to put some context around Steve’s point, there are a couple of hundred NHS trusts with an existing consistent system for providing data. There are tens of thousands of social care settings that one needs to collect data from, and that’s the challenge that Steve is talking about.

Brand then brought up the case of France which you mentioned, where they suddenly introduced care home deaths into their statistics. He asked whether this indicated that it would be fair to include care home data in the daily deaths announcement. Yvonne Doyle responded:

Happy to discuss that. Indeed, different countries report in different ways, and one of the issues that we’ve noticed is sometimes the way those data are presented can cause quite a surprise in the system. Recently, there was quite a large inject of data from care homes in France. It made the data look as if there was an alarming increase in deaths on that day. It wasn’t actually the case. It demonstrates exactly the challenge of getting this right day on day, and we’re very much learning internationally. We’re in touch with all our European neighbors to learn the best we can do.

In conclusion, then, the data around deaths outside of hospitals, including care homes and cases in the community is being recorded by the Office for National Statistics, and can be found here. Specifically with regard to deaths in care homes, there are issues with reporting including the lack of a centralised reporting system, the number of social care providers compared with the number of hospitals, and the fact that doctors will be basing their diagnosis of cause of death on a probable, rather than a confirmed diagnosis. This means that this data is rather less accurate than deaths recorded in hospitals, and also includes a significant time lag. The government, along with PHE and the NHS seems to have decided that including this data in the reported daily death statistics would be a mistake, and could lead to inaccurate conclusions being drawn. They point to the very issue you draw attention to in your question: altering the way statistics are reported would lead to an anomalous increase in the reported deaths. According to the government briefing, however, steps are being taken to receive and record this data more quickly, perhaps on a daily basis rather than a weekly basis as it is currently.

Deaths in care homes have to be notified to the Care Quality Commission "without delay", but until recently they were not tracking Covid-19 deaths as a separate item, and it has taken a couple of weeks (as BBC reports) for the information to be collated. Normally this isn't an issue, but during the pandemic it has meant that the media have been reporting the daily hospital number only, and at first they didn't make that clear.

The UK has not restated or changed its calculation method, but it is taking steps to get the care home data more quickly. From the BBC article:

England's care home regulator, the Care Quality Commission (CQC), already has to be notified when there is a death in a care home. From this week it will also ask care providers to give daily updates on deaths and the number of confirmed and suspected coronavirus cases.

So there is no jump in the data from the UK.

Not the answer you're looking for? Browse other questions tagged united-kingdom covid-19-virus comparative-politics statistics .