What is the difference between leadership and statesmanship?

Is there any difference between leadership and statesmanship?

The terms are sometimes used interchangeably. But sometimes a significant difference is also observed. Please cite a few examples if possible, in the context of the modern political history of world leadership.

Terry Newell proposed the following model, illustrated below, in his 2012 book entitled Statesmanship, Character, and Leadership in America. Briefly, Newell's model includes six different factors which make up the overall quality of statesmanship. He argues that none of the six factors is more important than another - "There is no order of precedence; the leader moves among the six factors with dexterity in aiming for an act of statesmanship."

Firstly, the political context in which the leader's actions are taken, secondly, the leader's character, which combines a multitude of factors such as self-criticism, virtue, and, indeed, leadership.

The next three factors are sets of skills which Newell expects every successful statesman to master. These are shown in the three segments surrounding the centre of the diagram below: a transcendent purpose, a mastery of the art of politics, and an ability to persuade and compel support. He calls up visions of, for example, Martin Luther King Jr.'s ability to "command the nation’s attention from a jail cell because he could reconnect us to the purpose of America."

Finally, Newell argues that the last component is an aspiration to shape the nation's character: "Unless people rise to the leader’s moral vision, statesmanship is glorious in the attempt but remains, in Langston Hughes’s words, a 'dream deferred.'".

While Newell's model particularly examines the American view of statesmanship, hopefully that helps you separate the two terms in a more abstract context. 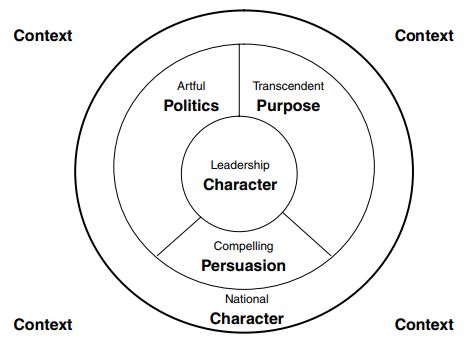 According to my opinion:

These two qualities are not always mutually exclusive, but sometimes they are found to be distinct.

For instance, Winston Churchill was a good leader and a statesman as he led Britain to go through WW2. The same can be said about Margaret Thatcher.

Fidel Castro was a good leader, but not a very good statesman.

On the other hand, Henry Kissinger was a good statesman, but there is no proof that he was a good leader.

And about the scenario of these days political-marketing through media (especially social media) promotions, is it a part of the real leadership and true statesmanship or is just a matter of false, short term fan-following ship !!

This section is actually asking for an opinion. I answering this part only to get my answer accepted.

Trump is neither a leader nor a statesman (diplomat). He is a clever businessman and got his presidentship by manipulating people through populism.

If the USA weren't a Republic with true separation of powers among state institutions, he would have been either gone through an uprising or would have become a dictator.

He would have also been gone if the USA had parliamentary democracy like the UK.

Not the answer you're looking for? Browse other questions tagged terminology history political-leaders political-marketing .