How has the apportionment of blame for COVID-19 by party changed over time in the US?

In a (recent) Morning Consult poll we find this question on whom Americans blame the most for the spread of Covid-19 in the US: 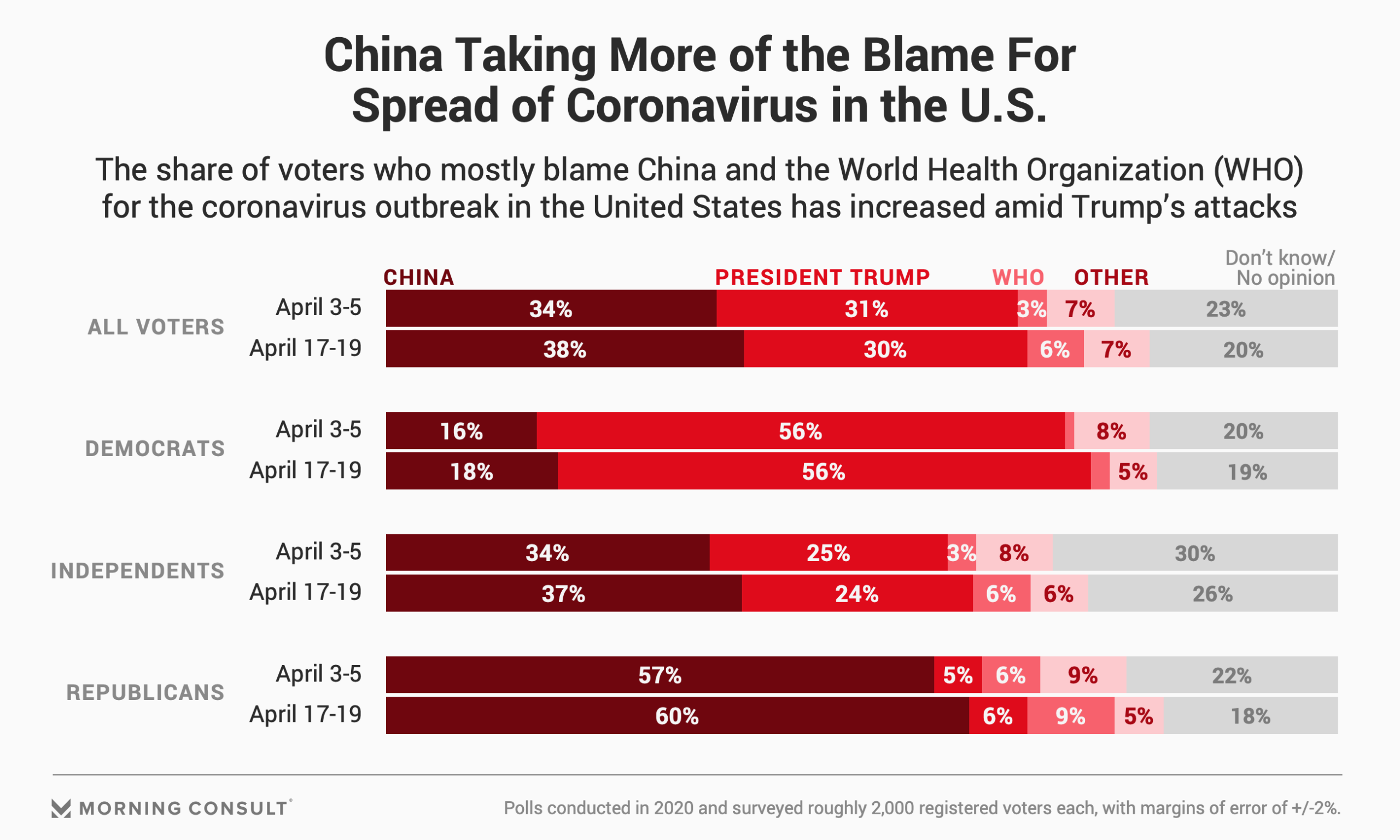 I do wonder however how answers to such a poll-question looked like between [end of] Jan and [end of] March, when Trump enjoyed somewhat higher job approval ratings among Democrats.

So, how did poll answers to this or similar questions (on whom deserves [most] blame for Covid-19 spreading in the US) look like in retrospect over the past 3-4 month or so?

The Morning Consult poll you refer to is just the latest in a series of polls they have conducted on the topic of COVID-19. They have also conducted similar surveys from Feb. 7-9, Feb. 24-26, Feb. 28-March 1, March 3-5, March 6-9, March 12-13, March 13-16, March 17-20, March 31-April 1, and April 10-12. Some of the earlier polls don't address the exact question of 'blame', mostly because the extent of the spread of the virus was relatively unknown at that point - 1,000 cases were only reported on March 11th, with only 37 deaths. The first poll to include a 'blame' question is the March 3-5 poll. The question of blame has become more relevant now that the public sees there as being something to be blamed for. However, we can perhaps infer from the levels of support for the administration how blame apportionment might have looked like.

There is far too much data in the above polls for me to cover sensibly without just re-hashing their articles, but I'll try to present a brief overview. The first survey, conducted at the beginning of February found that 72% of Republicans and 50% of Democrats thought that the US administration was doing "the right amount" with regard to the virus, with 18% and 30% respectively thinking that it wasn't doing enough. This translates to 61% of the electorate as a whole being content with the administration's response.

The second poll, towards the end of February, found that approval of the President and the CDC both slipped slightly, although as a whole the government's response was still supported by the public. This mainly occurred due to the fall in support from Democrats and independents - the support from Republicans remained.

Let's jump to the first poll to include the question of 'blame'. Conducted between March 3rd and March 5th, the tables (pg. 181) for this survey give a huge breakdown of blame apportionment. Donald Trump sits at 10% across all voters at this point, with the Chinese government at 29%. With Trump voters, this was 2% and 41% respectively, while for Clinton voters, this was 19% and 19%.

The March 12-13 poll was conducted just after Trump's March 11th address to the nation. At this point, public opinion was split roughly 50/50 - mostly down party lines. 84% of Republicans reported that they thought the Trump administration was on the right track, while only 22% of Democrats reported the same. This level of support remained the same over the next few days, although the next poll showed that support of the CDC remained far higher at 76% than Trump's at 47%. Blame was not mentioned in this poll, but the next poll, conducted a few days later, contained a blame question. Page 282 of the tables shows that 19% of voters blamed Trump, with 32% blaming China. For Trump voters, this was 4% and 52%, while with Clinton voters this was 39% and 16%. This seems to show that both sides doubled down on their positions.

Interestingly, the March 17-20 poll shows a marked rise in support for the Trump administration's response, with support levels rising from 18% to 26% among Democrats, 43% to 51% among independents, and 83% to 87% among Republicans. The question of blame was asked but the results did not change much from the previous poll. The article points out the likely cause of this:

Trump spent much of the week in front of the cameras, urging Americans to remain distant from each other and signing a bill into law that would increase access to testing. His administration also began crafting a $1 trillion measure to stimulate the economy as bars and restaurants have shut down in several cities, and major businesses in industries as varied as travel and candy have sounded the alarm about hits to their bottom line.

Unfortunately for Trump, this increase in support was shortlived - the poll conducted as we move into April was the first survey which mentions the apportionment of blame in the actual article, rather than just in the tables. The increase in support mentioned previously was wiped out by this point, and 30% of voters now blamed Trump for the spread of coronavirus. This was, however, still beaten by the Chinese government, at 33%. With Trump voters, this was 6% and 58%, with Clinton voters 56% and 15%. It also includes a pretty graph, although I'm not sure where the data for some of the points comes from - the question doesn't seem to be included in the poll tables for a few of the dates. 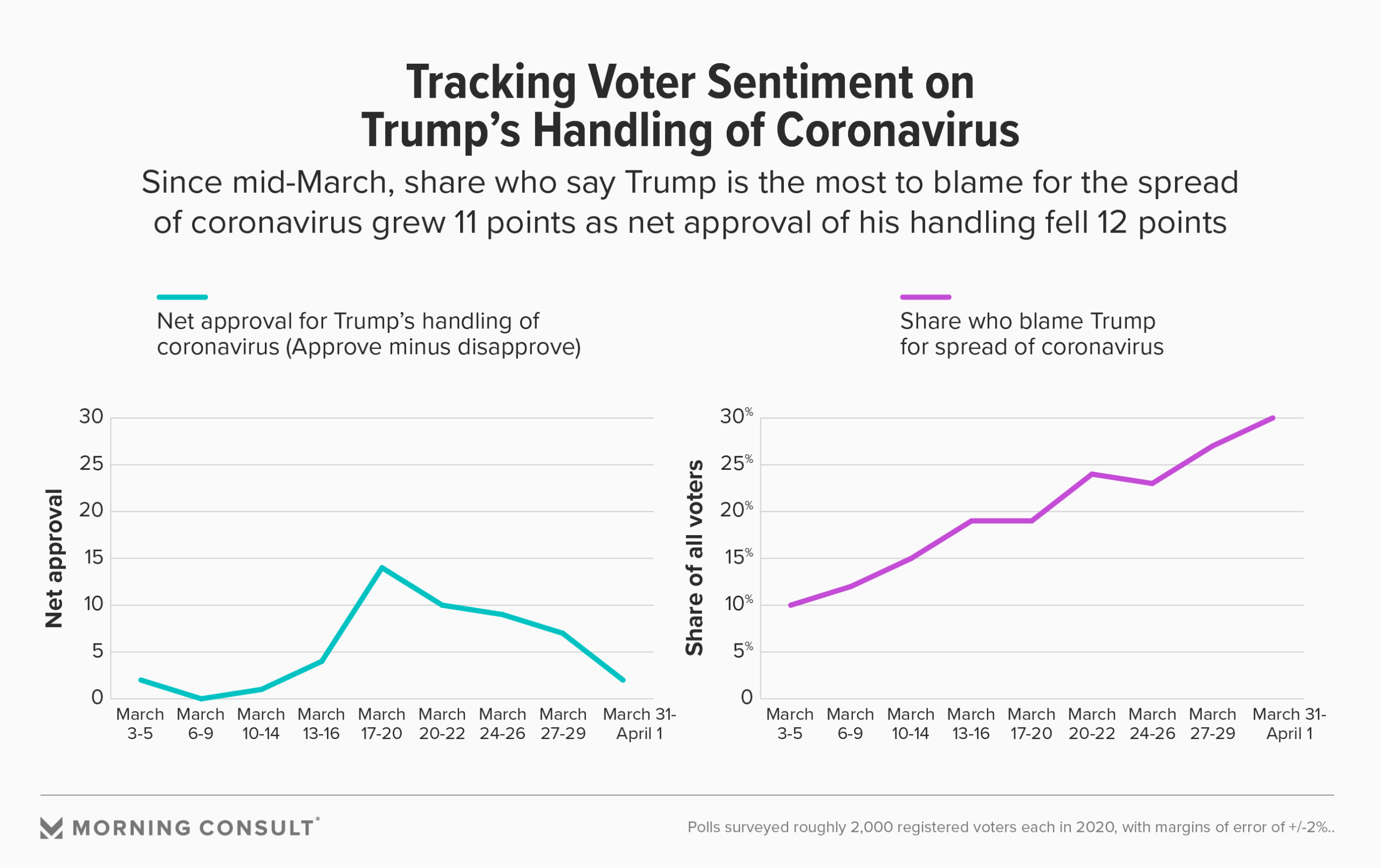 The final mid-April poll, conducted before the one you mention in your question really shows support for the Trump administration drop, although apportionment of blame still sits around the same level as at the start of April. Interestingly, however, the tables show that the WHO and the CDC also start to be blamed at this point, with 3% and 5% of voters blaming these organisations the most. (Trump voters 2% & 9%, Clinton voters 2% & 2%).

Hopefully, that gives a good enough overview, the tables for these surveys are yuge! In short, opinion starts fairly high due in part to the "rally 'round the flag" effect, drops initially, rises after the CARES Act is introduced, and then drops again.

Blame apportionment wasn't really surveyed from the outset, and when it began to be tested in March, it starts fairly low, with the majority of blame being apportioned to China. Over the course of March and April, gradually blame begins to be laid at Trump's feet, generally along party lines, becoming roughly equal with the blame apportioned to China. Additionally, a small number of mostly Trump voters blame the WHO the most.

Collating the data from these polls, I've created the following graphs: 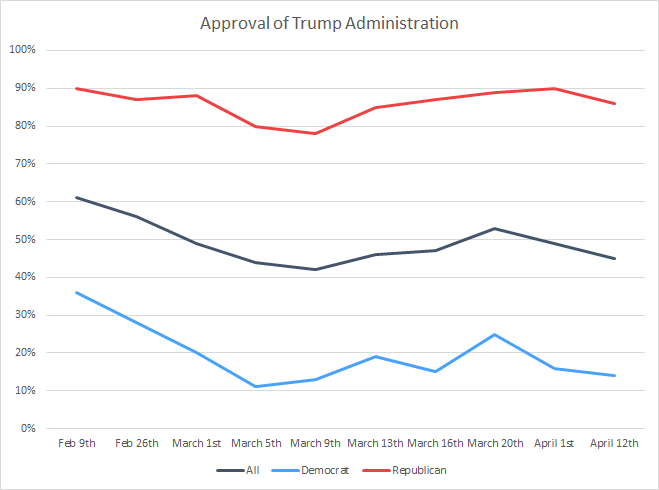 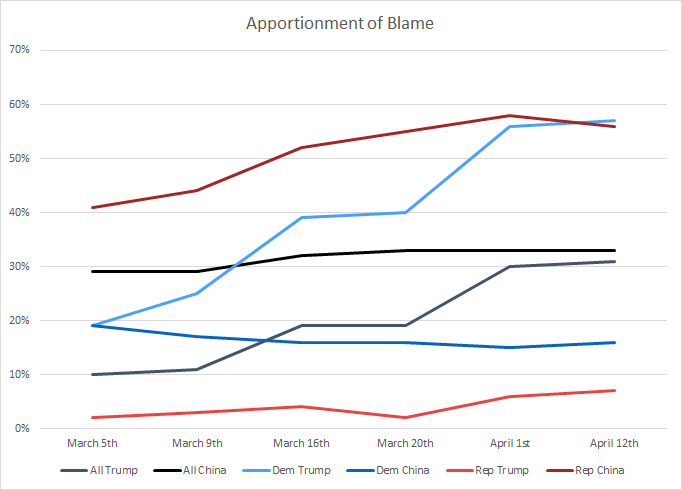 Not the answer you're looking for? Browse other questions tagged united-states covid-19 public-opinion polarization .

31
Why did Trump's "rally 'round the flag" effect evaporate so quickly?

62
Why has Donald Trump's popularity remained so stable over a rather long period of time?
6
How did the US prepare for the coronavirus (COVID-19) outbreak?
24
How has the handling of the coronavirus outbreak (CoViD-19) affected Donald Trump's approval ratings?
31
Is there an explanation for why ~20% of Americans think the US's response to COVID-19 has been better than South Korea's?
1
How are the job approval ratings of Governor Andrew Cuomo and mayor Bill de Blasio faring during the COVID-19 crisis?
5
How has public opinion of the European Union changed as a result of the COVID-19 crisis?
4
Why has Washington DC trended more Democratic over time?
6
Why has Narendra Modi's approval rating remained high despite massive protests by Indian farmers?