Are there Covid-19 death maps locally adjusted for population density?

As another data point, Spain for example has 496 deaths/mil.pop. but their population density is 93 per km2. So that makes Spain seen closer to the US--their number would roughly be a third (181 = 496 * 34/93) if (crudely) adjusted by population density to compared to the US.

For Italy, their population density is twice that of Spain (200 per km2) and their deaths per mil.pop. (441) are even less than Spain's. So that makes Italy look good in comparison to Spain in this view. Even compared to the US, Italy fares better (75 = 441 * 34/200) in this perspective.

My calculations are fairly crude adjustments though, ignoring the fact that within countries (esp. US or Sweden) there are large internal variations in population density. So are there some studies/maps that plot the local Covid-19 death rate relative to the local population density (worldwide)? (Of course one needs to do some clustering to produce such maps, so I'm leaving fairly open-ended what "local" means.)

Investigations of possible links between population density and the propagation and magnitude of epidemics have so far proved inconclusive. There are three possible reasons (i) A lack of focus on appropriate density intervals. (ii) For the density to be a meaningful variable the population must be distributed as uniformly as possible. If an area has towns and cities where a majority of the population is concentrated its average density is meaningless. [...] Here we show that when these requirements are properly accounted for, the size of epidemics is indeed closely connected with the population density. 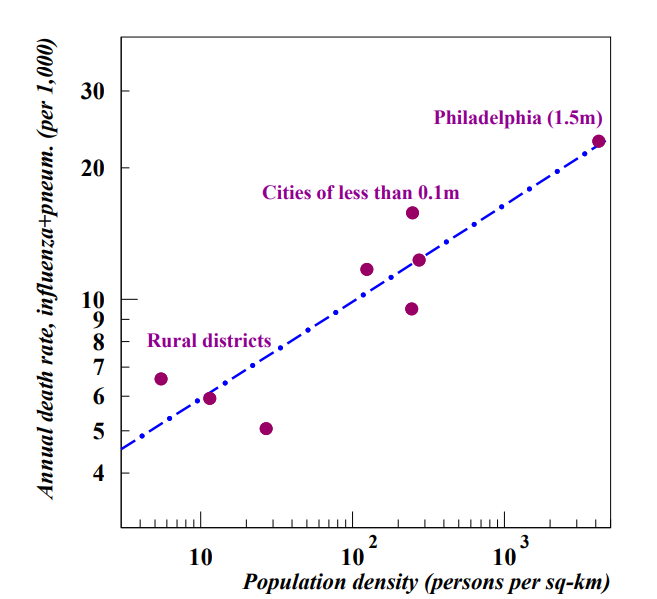 Relationship between population density d and the size µ of the influenza epidemic of September-December 1918. In the graph m means million. The data are for Indiana, Kansas and the city of Philadelphia in Pennsylvania. Influenza and pneumonia deaths are counted together. It can be seen that the relationship between population density holds only on a broad density scale. Inside of the three groups of data points the background fluctuations are strong enough to override the power law. The regression reads (the confidence interval is for a confidence probability of 0.95): µ = Cdα, α = 0.22 ± 0.08, C = 3.5. Source: Bureau of the Census (1920).

So, to repeat my question: are there any published models/maps of this kind (adjusting the death rate for population density) for Covid-19?

This is not quite a map, but a scatter plot of log deaths/pop vs pop. density. The US is the red dot next to "North America" and Sweden (USA label doesn't show for some reason unless you hover over it in the interactive version) 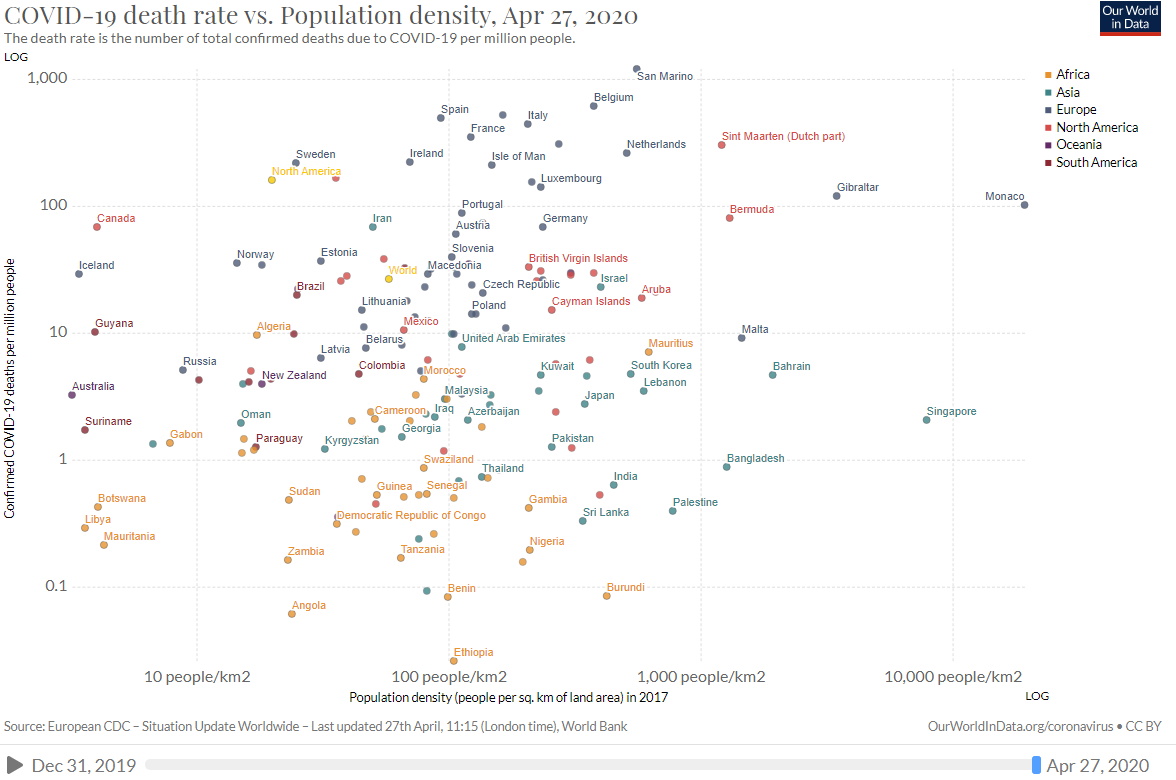 I'll accept a better answer that does go to a more local (i.e. below-country) level.

I found some data for the US like that (i.e. below country-level), but aggregated by county type (with a non-obvious figure of actual pop density), and it's also pretty dated (~1 month old by now): 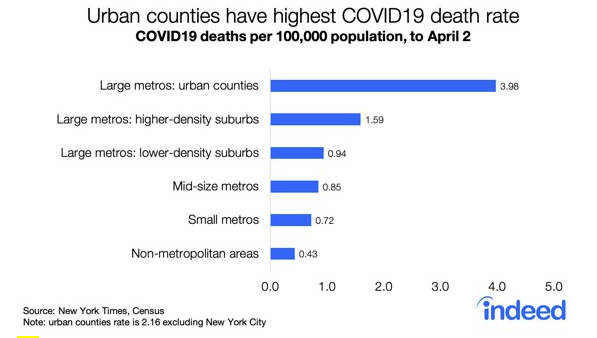 As to the question of density itself: Kolko’s analysis finds density to be significantly associated with Covid-19 deaths across U.S. counties. But density is not the only factor at play. His analysis also finds that Covid-19 death rates per capita are higher in counties with older populations and larger shares of minorities, and colder, wetter climates. It’s important to remember that this analysis only looks at the U.S., and in other parts of the world, denser cities have had more success controlling the spread.

Not the answer you're looking for? Browse other questions tagged covid-19-virus comparative-politics reference-request public-health .

75
Why is COVID-19 prompting such wide scale action versus other infectious diseases?
50
Why do Western countries seem to be less efficient than Asian countries in fighting against COVID-19?
32
Is there an explanation for why ~20% of Americans think the US's response to COVID-19 has been better than South Korea's?
1
How does Italy compare to NY in terms of COVID-19 testing, per capita?
6
Is there data comparing between US regions the degree of social distancing as a function of the outbreak severity?
5
Are any countries besides China planning to use “Fangcang” hospitals to relocate those infected/suspected of Covid-19, but who have a mild illness?
2
Is the UK reporting (extra) deaths in care homes now as related to Covid-19?
1
Are there other trackers/indexes of governments' response to Covid-19, beside OxCGRT?
4
How are deaths recorded and reported in the US?
12
Covid-19 public data accuracy, disclosure, and transparency