Why has trust in the written press fallen so dramatically in the UK?

According to the new 'Trust in Media' report (requires free registration to view) published at the end of April by the European Broadcasting Union, the UK has the lowest level of net trust in the written press in Europe by over 20 points. In particular, the report notes that this fell by 24 points in the period 2018-19; this data is shown below.

Although the report presents the findings, it doesn't really delve into why this drastic fall has occurred, nor why the UK is seemingly so untrusting in the first place.

Why is trust in the written press so low in the UK compared to the rest of Europe, and why has it fallen so dramatically during this particular period? 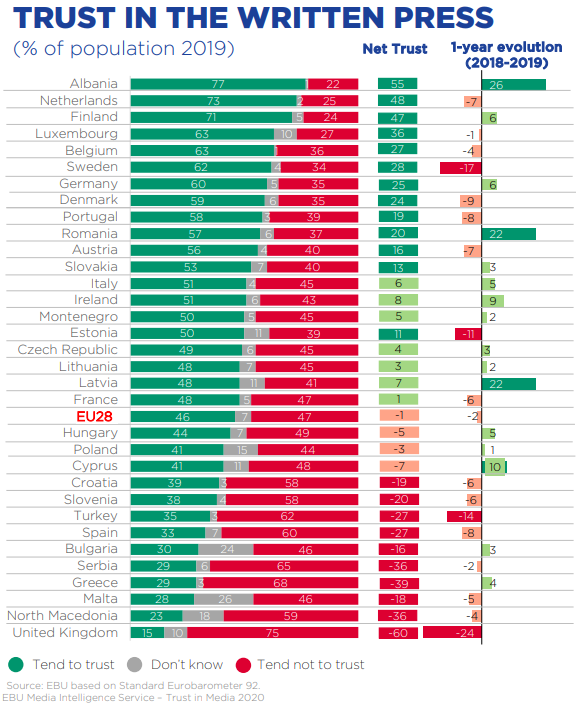 To answer the question about trust in the written press, I think we need to zoom out. Let's first have a look at trust in institutions more broadly. That's a fair step because your figure compares different news media in different countries. So not only are the news organizations different, so are their audiences.

Let's forget about the news organizations for a bit and focus on countries alone. Early this year, Reuters reported on a survey looking into trust in institutions in different countries. They wrote the following about the UK:

LONDON (Reuters) - Britons’ mistrust of government, business, the media and charities rose to the highest in at least 20 years last year, with only Russians admitted to less confidence in their country’s institutions, according to a long-running survey.

U.S. public relations firm Edelman ran the study from Oct. 19 to Nov. 18, a time of turmoil in Britain when parliament delayed the country’s planned departure from the European Union and Prime Minister Boris Johnson called a snap election.

Britain had ranked fifth from bottom in the trust rankings in the previous year’s survey, and fell past Ireland, Spain and Japan to the second-lowest spot in the research released on Monday, behind only Russia among the 28 countries surveyed.

That establishes that trust in institutions in the UK has hit a low.

Now let's go through the UK Supplement that comes with Edelman's survey. We'll have a look at some figures relating to news media and see how they stack up with the figures in the question:

Percent in the UK who think each institution is doing well/very well on the issue: Media: (all from page 45)

So these are just some figures about the news media as a whole. While these numbers aren't high, even the lowest at 22% is significantly higher than the 15% low in the study on the written press in question.

Now, we can finally look at different UK news media. To do so, we focus on a more recent article on the YouGov website. While the study focused at least in part on the coronavirus pandemic, the authors found that:

More interesting for us, however, is their graph comparing journalists based on the organization they represent: 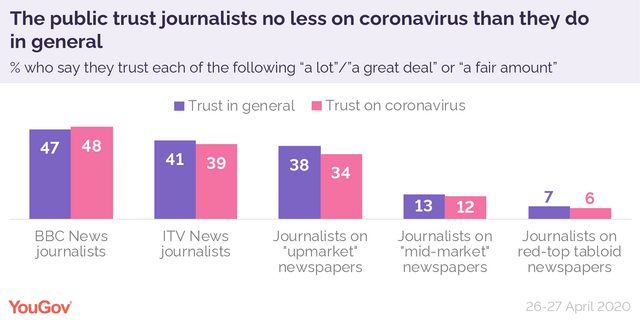 We see here that TV journalists are trusted more than their written press counterparts. Looking only at the three rightmost columns, we see that the mid-market newspapers and red-top tabloids score below the 15% mark in question while the upmarket papers enjoy trust levels just below TV journalists.

To answer the first question on how this stacks up with other countries, I think the Edelman survey and the YouGov poll combined show that there are two main factors. The first factor is that trust in UK institutions is low generally. The second factor is that midmarket newspapers and tabloids drag the print media's trust rating down even further compared to UK media more broadly.

Why the sharp (year on year) decline?

To explain the sharp decline, we turn to an article in the Guardian, reporting on research by Oxford University’s Reuters Institute for the Study of Journalism. They wrote:

The British public’s trust in the media has fallen off a cliff in the last five years, particularly among leftwing voters, research suggests.

Just 15% of left-leaning voters now say they trust most news most of the time, down from 46% as recently as 2015, Oxford University’s Reuters Institute for the Study of Journalism found.

The precipitous decline has coincided with enormous growth of social media audiences, rounds of cuts at almost every major news outlet, and strong criticism of media coverage of issues such as Brexit and Jeremy Corbyn’s leadership of the Labour party.

“Trust in the news has fallen over 20 percentage points since 2015,” concluded the authors of the Reuters Institute’s annual digital news report. “Even the most trusted brands like the BBC are seen by many as pushing or suppressing agendas, especially over polarising issues like Brexit.”

The following graphic by the Guardian shows trust in the news media (in general) in the UK and US based on political leaning: 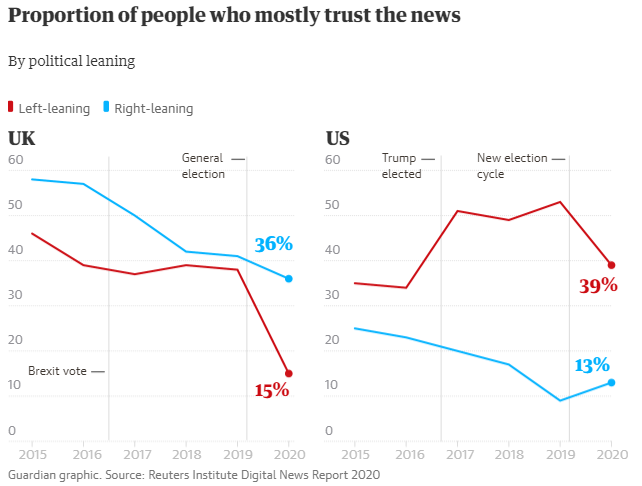 Based on the figure above, one might speculate that the 2019 early general election outcome in which the Conservative party won a majority had something to do with it. The source for the data, however, is Standard Eurobarometer 92 for which the fieldwork was conducted in November 19. Therefore, the outcome of the December election cannot explain the decline in trust.

The Guardian article gives one explanation, but it remains unclear if that fully explains the sharp decline in trust:

The BBC remains the most trusted national news outlet, but support among the most politically partisan consumers – on both the left and right – has fallen by 20 percentage points since 2018.

The study found there was a “silent majority” of Britons who still strongly wanted the news to be presented in a “neutral and detached” manner, backing BBC news bosses who discourage their reporters from expressing personal political views on social media.

Not the answer you're looking for? Browse other questions tagged united-kingdom europe public-opinion media .

3
Is the day of a press release an issue of political strategy?
8
Are there precedents for the EU fining the UK for undervalued Chinese imports?
1
How does the UK deal with freedom of the press?
10
Does the UK have a written constitution?
11
Have supporters of “right-wing populist” parties in Europe explained why they trust Trump?
2
Broadcast delay of Presidential informal press encounters
9
What has led to Poland's rapid fall in the World Press Freedom Index over the last 5 years?
14
Why did the Trump administration hold a press conference in the parking lot of a landscaping company?